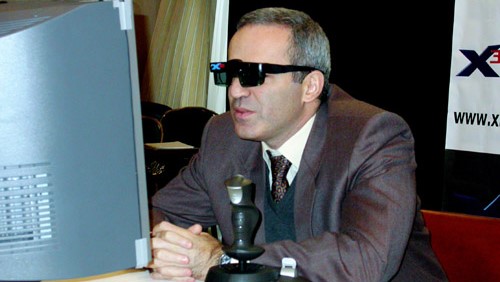 On May 11, 1997, exactly today 23 years ago, an auditorium in New York City became the center of world attention. About 500 spectators who had spent 25 dollars packed the room. In a line that was not far apart, 300 journalists were ready to preach what would soon happen while around dozens of television cameras continued to highlight the stage.

Anyone who witnessed that moment quietly harbored the question of whether Garry Kasparov would lose to a machine. Yes, in the auditorium, he was playing chess against IBM's Deep Blue computer machine.

It was the deciding game 6. In the previous five games, Kasparov and Deep Blue drew the results of one win for each and three draws. Then, whoever won in that game won overall. At that time, Kasparov was still the best chess player in the world.

Since beating Anatoly Karpov in 1985, Kasparov had won five World Chess Championships and 15 other tournaments he participated in. However, when chess observers and fans considered that defeating him was approaching impossibility, before Deep Blue that day, the fate of the Russian chess player turned out to be on the edge.

It all started with what Kasparov did in step 7. Playing with Caro-Kann Defense, a positional tactic, he made a fatal mistake. Instead of moving his bishop, he moved his pawn to h6. The move shocked the match commentators, but the response from Deep Blue was even more shocking for them. Deep Blue attacked Kasparov's pawn on e6 with its knight and sacrificed it.

According to chess observers, the sacrifice was quite surprising because computers usually chose material advantages over position advantages. Even though Deep Blue could evaluate 200 million steps in a second, it should not have a long-term strategy.

They also knew that sacrifice would be very difficult to resist. Kasparov's queen was under threat. His other pieces were in an undeveloped position, and Deep Blue could attack from various angles. However, given Kasparov's capacity, they actually hoped that the World Champion would be able to create a miracle like when he beat Karpov three times in three different championships.

Unfortunately, that hope fell short of expectations. Kasparov considered the mistake had an enormous consequence. In his book, Deep Thinking

, he made a confession. What happened next was a history that would never be forgotten in the world of chess.

Kasparov, who played black pieces, made careless moves and even had to move his king improperly at the 10th step. After Deep Blue took the 19th step, Kasparov surprisingly decided to give up. Deep Blue finally became the first computer to beat the chess world champion and succeeded in avenging its defeat in the first duel against Kasparov that took place in February 1996.

IBM was partying, and the journalists were after Kasparov. "What happened to this game?" The journalist asked him repeatedly in the press conference after the match. He answered the question sternly that it was not worthy of being called a game because he felt he was not in good condition.

Kasparov also gave a surprising statement. He felt he was cheated. Deep Blue, according to Kasparov, did not move based on artificial intelligence but was driven by a Grandmaster directly. The machine, he said, was too human to be a machine.


The machine that should not be underestimated

After defeating Deep Blue 4–2 in 1996, Kasparov made an analysis of Deep Blue's performance. In his analysis, he considered that the supercomputer would change the future of the chess world. Deep Blue was able to evaluate 100 million steps in one second.


To excel materially, Deep Blue could calculate it for several steps ahead. For people who wanted to explore chess, this machine would certainly be very useful in the future. Unfortunately, its complex ability was apparently not enough to defeat the Grandmaster of Kasparov's class.

One reason, obviously, was that Deep Blue did not understand positional games. Kasparov also gave an example of Deep Blue's performance in the second to sixth games. Although it could not be said to be absolutely superior, Kasparov had managed to dictate the overall match.

Kasparov deliberately took unpopular steps and changed plans in the next few steps. The strategy was intended to give Deep Blue no opportunity to excel materially, attack Kasparov's king frontally, and carry out all its priorities.

Kasparov's approach proved effective. Not understanding what he was doing, Deep Blue had difficulty making decisions and often made blunders. As a result, it lost, and Kasparov concluded: Even though he saw signs of intelligence in Deep Blue, it was a strange type of intelligence that was inefficient and flexible.

In short, no matter how good it was made, Kasparov considered the intelligence of a machine would not be able to match the intelligence of humans. His arrogance heightened competition between him and IBM. Unable to accept the words of the World Champion, IBM challenged Kasparov to do a rematch. That challenge was accepted with open arms.

Deep Blue was the only supercomputer machine with 30 processors and 480 integrated circuits specifically designed for playing chess. Unlike the previous engine, the brand-new version of Deep Blue was of course far more terrible.

Deep Blue was now able to evaluate 200 million steps in one second. That meant Deep Blue could also explore its priorities up to 40 steps ahead. In addition, the Deep Blue trainers apparently also instilled additional priorities that Kasparov had never imagined.

Kasparov still felt fine when holding the first match. Starting the match with King's Indian Attack, he used the anti-computer strategy and managed to win after Deep Blue made many mistakes. However, like his confession in the book How Life Imitates Chess

, Deep Blue changed completely in the second game, a change which he thought was very unnatural.

The machine played as well as Karpov did, especially at the moment when Kasparov really needed the chance to counterattack. He even made a material sacrifice to get that opportunity. Unexpectedly, unlike most computers, the machine refused material benefits.

Kasparov, the match commentator, chess observers, and the audience were surprised. It was an amazing step from Deep Blue. Humans knew that machines would not reject material benefits, but knowing the computer could find that idea was something extraordinary. None of the computer programs that had been tested were able to perform such a step within the normal time limit.


After that step, Kasparov changed completely. He no longer looked like a world champion full of confidence and more like a vulnerable chess player who could be defeated by anyone. The emotions of Magnus Carlsen's ex-mentor also overflowed.

Even when Deep Blue made a blunder at the end of the game where it could have ended in a draw, Kasparov chose to give up because there was only one in his mind at that time: IBM was cheating. That step was actually not dangerous, but how could the computer take such human steps? The accusation continued until Kasparov lost in game 6.

Because IBM did not want to reveal data from Deep Blue, chess observers made their own theory to reveal it. One of the most famous theories ever reported was that Kasparov lost because of a bug. The bug then made Deep Blue take a random step at step 36, surprise him, and attack his mental.

Although there might be some truth, the accusation and the theory were not entirely on target. In Deep Thinking

, Kasparov explained the 36th step taken by Deep Blue in the second game was not the only thing that undermined his competitive mentality.

That step had a big impact, but the way Deep Blue took each step also had a significant impact. Kasparov calculated that the computer needed 5–10 minutes to take the difficult step. However, it turned out that Deep Blue could play the time: think fast to take difficult steps or even think very long for easy steps.

Why was that? Miguel Illescas, one of Deep Blue's coaches, opened it far after the match. They made special tricks to fight Kasparov. For certain steps, they deliberately delayed or otherwise took it quickly.

In a certain position, they bet Kasparov would take his best course, and if that happened, they wanted Deep Blue to respond quickly. Their aim was to create psychological effects on him, so he thought that this machine was unpredictable at all.

In addition, Illescas also explained that bugs were not the only reason Deep Blue took random steps. The machine was programmed in such a way that within a certain time, it was free to take random steps even if it had to violate priorities.

The allegations of cheating in the match were admitted by IBM. Still, in Deep Thinking

, Kasparov explained that on game days, IBM had swapped the hotel room staff where he was staying with someone who could speak Russian.

The goal was that the person could eavesdrop on Kasparov's conversation with his team about the game plans, so the room staff could tell IBM and the Deep Blue coaches to plant a new program to anticipate it.

However, what should be underlined was IBM did not commit fraud during the games. At that time, according to IBM, Kasparov actually competed against the machine without human intervention. For all that, he finally admitted that he really lost to a machine.

Kasparov apologized to IBM and realized his frustration at that time was based on mere emotion. Nevertheless, he regretted IBM's attitude afterward. One of the largest computer manufacturers in the world turned out to only want to take advantage.

Within weeks after the victory, the value of IBM's shares soared. The development of Deep Blue, which according to Kasparov could help the development of chess in the world, was then stopped. It can be said that IBM won twice.