de Houtman was killed by the stab of Malahayati's rencong 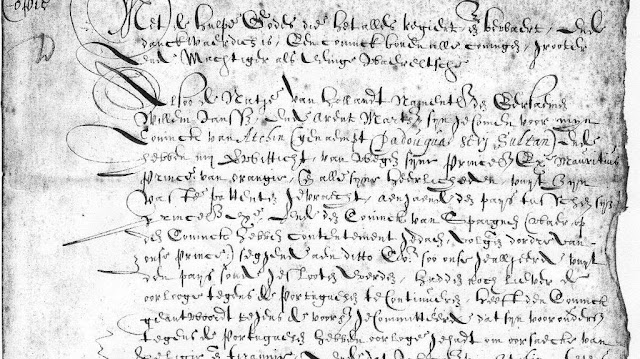 Two large ships with Dutch flags appeared to dock at the port of Aceh in mid-June 1599. The two ships were headed by two brothers, Frederick and Cornelis de Houtman. Initially, their arrival was welcomed. But later, Cornelis died at the hands of a tough woman, the admiral of the Aceh Sultanate, Malahayati.

The voyage to Aceh was the umpteenth time for the de Houtman brothers in the archipelago. Unfortunately, almost all attempts to find the spice center ended in failure. Banten, Madura, and Bali had previously been visited, but they always ended up fighting against the local people because of the unfriendly nature of the Dutch sailors.

In the Porch of Mecca, the adventures of the brothers ended. Frederick was once held captive by Acehnese troops and was lucky enough to finally be able to return to the Netherlands. Meanwhile, Cornelis fared far worse. His life ended at the tip of Admiral Malahayati's rencong in a one-on-one duel that took place on his own ship.

Her real name was Keumalahayati, although she was better known by the shorter greeting, Malahayati. This brave woman still belonged to the core royal family. Her father Machmud Syah was a descendant of Ali Mughayat Syah, the founder of the Sultanate of Aceh Darussalam.

Since childhood, Malahayati didn't really like preening. She was more fond of practicing dexterity, which would lead her to achieve her dream of becoming a warlord. That talent flowed directly from her father and grandfather, who had served as naval admirals for the Aceh Sultanate.

The Sultanate of Aceh Darussalam was once ruled by several queens or sultanas. Even in the next period, Aceh was quite attached to the leadership of tough women like Cut Nyak Dhien, Cut Nyak Meutia, and so on.


So, it didn't really matter if, in the end, Malahayati chose the military route as her life choice. She was a graduate of the Ma'had Baitul Maqdis, the Aceh Sultanate Royal Military Academy, which recruited several war instructors from Turkey. She seemed quite gifted on the path that had to struggle.

As one of the best graduates in the Ma'had Baitul Maqdis, Malahayati was taken to a higher level. In the era of Alauddin Ri'ayat Syah Sayyid al-Mukammal, Malahayati was appointed as the palace commander and head of the national guard to replace her husband who died when he faced the Portuguese in Haru Bay, Strait of Malacca.

Sultan Alauddin also gave Malahayati the top leadership of the Royal Navy with the rank of admiral, a position her father and grandfather had also held. She was said to be the first female admiral in the archipelago, maybe even in the world.

Not only did Malahayati lead an army that was dominated by the male class, but she also mobilized the strength of women, especially widows whose husbands died at the war in the Haru Bay just like her. According to Damien Kingsbury in Peace in Aceh

, the line of brave widows under Malahayati's leadership was known as Inong Balee.

Initially, the Inong Balee troops only had a thousand members. But then its strength increased to two thousand personnel. Malahayati made Lam Reh Bay, Krueng Raya, her military base, and on the nearby hills, she built both a fortress and a watchtower.

Malahayati did seem to stand out in those days. In addition to managing troops, she also oversaw all ports and trading ports and their ships in the Aceh region. At that time, the Sultanate had no less than a hundred ships, each of which could carry more than 400 passengers.


Until June 21, 1599, a group of Dutch explorers led by de Houtman brothers docked at the dock owned by Aceh Darussalam. The two large ships that arrived were named de Leeuw and de Leeuwin. Frederick and Cornelis de Houtman served as captains of each of these ships.

Initially, the relations between the immigrants from Europe with the people and the Sultanate of Aceh Darussalam were well established. Until then, due to the behavior of the Dutch people and the provocation of a Portuguese whom Sultan Alauddin trusted, the seeds of conflict began to emerge.

Realizing the situation was getting hot, Frederick and Cornelis coordinated aboard their ships to prepare themselves for the upcoming attack. And it was true that Sultan Alauddin ordered Admiral Malahayati to attack the two Dutch ships that were still holding out in the Malacca Strait.

Then there was a battle in the middle of the sea. The Dutch fleet was apparently overwhelmed by the resilience of Malahayati's thousands of troops, including the line of widows who dared to die. Until finally, she made it to Cornelis de Houtman's ship and faced each other.

Malahayati held the rencong tightly in her hand while the Dutch captain was armed with a sword. A one-on-one duel ensued. On one occasion in the middle of the fight, she managed to stab Cornelis to death. The incident occurred on September 1, 1599.

The Dutch fleet lost. Meanwhile, those who remained were arrested and thrown in prison, including Cornelis's brother Frederick de Houtman.

Several decades after that battle, Admiral Malahayati died, leaving a big name that was even recognized by European nations. The body of the heroine from the Land of Rencong was buried at the foot of the Krueng Raya Hill.

Centuries later, for more than 400 years, the President of the Republic of Indonesia, Joko Widodo, gave Malahayati the title of national hero on November 6, 2017. Now people know Aceh not only has Cut Nyak Dhien or Cut Nyak Meutia but also another female figure who was no less powerful, the world's first female admiral, Malahayati.