Last Film Show, a Love Letter to Cinema and the World It Represents 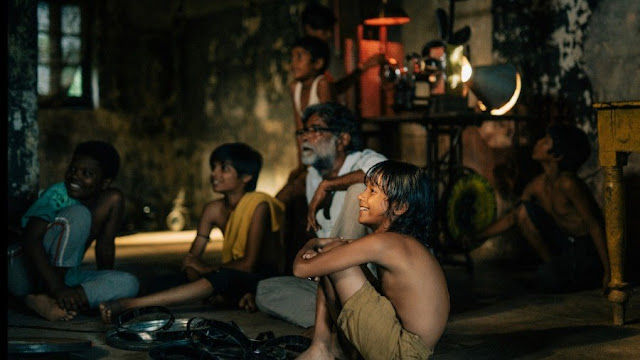 It doesn't seem too far away to bring back memories from a decade ago. However, for some people, the nostalgia presented can still be special. This is how Pan Nalin remembered his childhood. He was just a tea vendor on the train at the time. Until then, he left in his early teens to pursue his dream of becoming a filmmaker.

Last Film Show (or Chhello Show), a semi-autobiographical story, is set in such a setting. The film is set in Chalala, a small railroad town in Gujarat, India, around 2010. Time seems to have stopped here. Even the name of a cinema there, Galaxy Cinema, appears to be from a bygone era, perhaps the 1930s or 1940s.

The director's childhood is depicted through the eyes of a boy named Samay (Bhavin Rabari). Samay is invited to the movies by his father for the first time since he was a toddler, and this time it is a religious film about Goddess Mahakali.

Samay is taken aback by the moving image show, and even more so by the celluloid projector's performance. Instantly, he discovers a realm that sparks his "I-want-to-be-there" desire: cinema. Unfortunately, the journey will not be without bumps.

According to his father, Bapuji (Dipen Raval), the film industry is filthy. Even though the world appears to be more promising than their living conditions as Brahmin caste members, it contradicts their values.

Last Film Show is a coming-of-age story about an innocent child with flowery hopes. Samay tells stories with pictures on matchboxes, imagining the world in various colors, aka "color grading" with glass bottles.

Samay, inspired by the actions of Shah Rukh Khan and Anil Kapoor, is willing to steal money from selling tea in order to buy movie tickets, and he sneaks even more. He is becoming increasingly dissimilar from the ideal type of boy that his father has projected on him.

Also, he skips school more and more and becomes friends with Fazal (Bhavesh Shrimali), the operator of the film player at Galaxy Cinema, whom he bribes with chapati or whatever his mother usually makes.

Recognizing the limitations of his filmmaking equipment, Samay invites his colleagues to steal film rolls from the cinema, cut them, and act in the film. The father's repeated complaints and expulsion from the cinema do not stop Samay. Finally, his and his friends' actions are discovered by the authorities. Samay has to spend time in a juvenile prison as well.

Samay is once again hesitant to simply stop. Samay et al. eventually succeeds in presenting a decent film screening, which is also witnessed by local residents, using the tools they collected from the waste bank.

The same event prompts a shift in his father's perception of him.

An Insightful Reminder for Moving Pictures

It reveals several aspects at the same time. First, consider the sacrifices that children from outside major cities must make in order to realize their dreams. That means leaving Chalala for Samay. Second, it emphasizes India's social climate.

The two points remain universal. The plot itself is heavily influenced by Tornatore's Cinema Paradiso and presents a story that could be quite common. If it exists, it can happen anywhere in the world. Cinema on the ground, the concepts could enter the minds of any child who is interested in movies.

The choice of time setting is what gives Last Film Show an extra dimension. Celluloid projectors are being replaced by digital film projectors at the same time, at least in Galaxy Cinema and Gujarat. When this is combined with the low caste factor (in the context of not being able to speak English), a new problem arises when Fazal, the celluloid film projector, is no longer required for his strength.

These layers comprise the main plot of the effort to put dreams together as well as seize space for entertainment, the addition of a more intimate human aspect, namely saving the closest person. This man can support his family even without dreaming. It's already excellent.

Meanwhile, the film player is melted down into tablespoons. Rolls of melted film are repurposed as bangles.

Samay’s and his friends' eyes are also filled with wonder throughout the story. Last Film Show has featured credits for the Lumière brothers as well as directors such as Tarkovsky and Kubrick since its inception.

Similarly, at the end of the film, as "avatars" from the colorful bracelets Samay sees, the names of popular directors and actors are called out one by one. The process of making spoons and bracelets, which are given a larger portion at the end of the story, may indicate that, even though their function has changed, these films are still alive and useful indefinitely.

Last Film Show attempts to remember and pay tribute to its past and present activists in the current era of film accessibility with a single click or tap of a finger. Not only the director but also the method by which the moving images are delivered to us, there is an attempt to demonstrate the power of cinematic dreams.

Last Film Show, which is less than two hours long, can be considered successful in conveying its points thanks to an enjoyable village setting and quite convincing acting from the cast. Of course, it's nothing special, but it's effective enough to rekindle our enthusiasm for the film and its various aspects. It reminds us of the awe that fades from time to time.