Kepler-138: A new planet with a lot of water 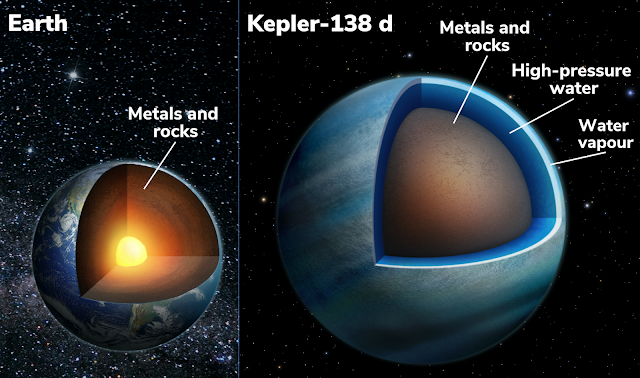 The mission to explore the universe in search of new planetary locations suitable for human settlement has recently made significant progress. The researchers discovered evidence of the existence of two planets known as the “water world,” aka “water planet,” where water accounts for most of the planet’s total mass.

The discovery of H2O or water on a planet, particularly water in liquid form, is critical for a mission to explore the universe. The presence of water shows that the environment is suitable for the survival of living things, partly because water shows that the planet’s temperature is relatively stable and that an ozone layer exists to keep water on the planet’s surface.

Scientists have dubbed the two planets “the water world.” They are in a cluster of planets in the constellation Lyra, 219 light years away from Earth. These planets orbit a red dwarf star, a type of star with the smallest size compared to other stars. Red dwarf stars have lower temperatures than different types of stars and are the only stars that can live for trillions of years.

A cross-university research team led by Caroline Piaulet of the Institute for Research on Exoplanets at the University of Montreal carried out the research. The team used NASA’s Hubble and Spitzer Space Telescopes to conduct their research, typically used to observe clusters of planets far from Earth.

Kepler-138 is the planetary cluster seen this time. This planetary cluster is named Kepler because it is in view of NASA’s Kepler spacecraft, which orbited from 2009 to 2018. During its orbit, Kepler collected data on the presence of five hundred thousand stars and many more exoplanets (planets that orbit outside our solar system).

In this study, scientists discovered three exoplanets in the Kepler-138 cluster, namely Kepler-138b, Kepler-138c, and Kepler-138d. Two planets (Kepler-138c and Kepler-138d) drew researchers’ attention, prompting them to conduct additional observations to determine the type of material that makes up these planets.

To find out, compare the size and mass of the two planets to that of the Earth. When the researchers compared and calculated the specific gravity of the planet-forming materials, they discovered that much of the planet’s volume is made up of material that is lighter than rock but heavier than hydrogen or helium. Water is the most likely alternative to describe this type of material.

However, additional observations show that the two planets have very different characteristics from Earth. Instead of rocks and metals, these two planets are most likely made up of water. Even though water makes up nearly half of the volume of these two planets, the atmospheric temperature of Kepler-138d is most likely above the boiling point of water, reducing the possibility of water forming in liquid form.

As a result, the researchers believe that the thick atmospheres that surround the two planets are made of water vapor. However, under certain atmospheric conditions, water vapor has the potential to transform into liquid water or even another phase of water that occurs at high pressure (supercritical fluid).

The good news is that the research team discovered evidence of the existence of a previously unknown fourth planet in the Kepler cluster because of their efforts. The new planet, Kepler-138e, orbits the red dwarf star at a greater distance than Kepler-138c and Kepler-138d.

The universe has many “water planets”

Water is a necessary element for all life forms on Earth. The rain cycle is an important part of the system that works to stabilize our planet’s climate and make it hospitable to living things. As a result, when scientists discuss new planet-hunting missions, water-filled planets are always prioritized.

There are more planets than previously thought that may contain large amounts of water. Instead of flowing on the surface as oceans or rivers, the water content may be embedded in the rocks. Scientists are finding more and more signs of the existence of planets in the solar system that are far from Earth thanks to improved telescope instruments.

The larger sample size of the study aids scientists in identifying patterns in the presence of water-bearing planets. The method is analogous to observing an entire city’s population to uncover trends that are difficult to detect at the individual level.

Rafael Luque studied the population of a group of planets orbiting an M-dwarf star with Enric Pallé of the Institute of the Canary Islands and the University of La Laguna. This is the most common type of star in our galaxy, and scientists have compiled a list of dozens of planets orbiting them.

A giant, light-mass planet, such as Jupiter, could have formed from gaseous matter. Meanwhile, planets that are small but heavy and dense, like Earth, are likely to have formed from rocky material. This type of analysis technique has been widely used for each planet individually, but it is rarely applied to the entire population of planets in the Milky Way galaxy.

When scientists examined the results of an analysis of the entire galaxy, they discovered an unexpected picture: most of these planets have a mass that is too light for their size. This research suggests that many of these planets comprise half rock and half water or other types of lighter molecules.

The analogy is that of a bowling ball and a soccer ball, both of which are the same size but have different weights because of differences in the materials used. However, you should know the water content does not have to be as vast as seas and rivers on the planet’s surface; water can be mixed into the rock or hidden in pockets beneath the planet’s surface. This is like Europa (a moon of Jupiter), which is thought to have liquid water beneath its solid surface.

Scientists’ next assignment is to determine the type of planet-forming material and how it is distributed within the planet. Scientists have high hopes for the James Webb Space Telescope (JWST), NASA’s space telescope and the successor to the Hubble Telescope, which was launched on December 25, 2021.