Earthquakes Are Common in Indonesia, but Mitigation Measures Are Lacking 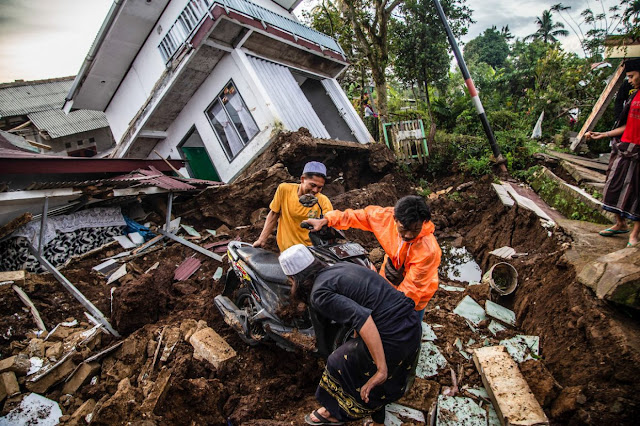 On November 21, at 1:21 p.m. local time, an earthquake with a magnitude of 5.6 struck Cianjur Regency in West Java. The 10-kilometer-deep earthquake caused buildings and cliffs to collapse, killing up to 327 people.

Meanwhile, the number of people missing following the earthquake in Cianjur Regency has risen to 13. The earthquake also resulted in 108 serious injuries, which were all treated at nearby hospitals. Outpatient treatment is continuing for 40 of the 108 injured victims. So far, 73,874 people have been displaced because of the Cianjur earthquake. They are distributed across 194 evacuation points in eight districts in Cianjur, West Java.

Active fault activity caused the earthquake. The characteristics of these active faults, however, are unknown. The site was in the northeastern part of the Cimandiri fault zone. Until November 28, or eight days after the first earthquake, there had been 305 aftershocks. However, the activity of aftershocks with fluctuating magnitudes is getting smaller, as is the frequency of occurrence, which is getting rarer.

Indonesia Is Prone to Earthquakes

Indonesia is prone to geological disasters like earthquakes. The interaction of four tectonic plates in Indonesia, namely the Eurasian Plate, the Indo-Australian Plate, the Pacific Plate, and the Philippine Sea Plate, handles this.

The active Matano fault caused the Morowali earthquake, which had a magnitude of 4.9. While the subduction of the Banda Sea Plate caused the 7.4-magnitude earthquake in Southwest Maluku. There were no fatalities because of the two earthquakes.

The most severe earthquake in 2021 occurred on January 15, 2021, in Mamuju and Majene Regencies, West Sulawesi. This earthquake, with a magnitude of 6.2, killed 106 people and seriously injured 278 others. There were 6,478 minor injury victims reported in Mamuju Regency, with 2,493 in Majene. The total damage and losses caused by the West Sulawesi earthquake reached IDR 829.1 billion.

When viewed from a global perspective, earthquakes continue to be a disaster that claims many lives. Since the 2000s, earthquakes have claimed many lives, reaching 100 thousand in 2004 and 2010. The Aceh earthquake and tsunami in 2004 and the Port-au-Prince earthquake in Haiti in 2010 were the two events.

The magnitude-9 earthquake that struck Aceh on December 26, 2004, caused a tsunami and killed at least 165 thousand people. According to Our World in Data, the total number of deaths is close to 228 thousand people. While the earthquake in Haiti killed 316 thousand of people, the exact number of victims is still being debated.

West Sulawesi, the Bangka Belitung Islands, and Maluku are the provinces most at risk. At the regional level, Cianjur Regency is listed as one of the top 20 areas with high disaster risk. Southwest Maluku and Majene, which were recently hit by a powerful earthquake in 2021, are the areas most vulnerable to disaster.

From 2015 to 2021, Cianjur Regency has been classified as having a high disaster risk. Unfortunately, the Cianjur Regency government provides disaster mitigation funds in 2022 that are quite small, accounting for only about 0.05 percent of the total regional budget. The capital expenditure for river/coastal protection and disaster management amounted to IDR 2.1 billion of the IDR 4.34 trillion total regional expenditure budget.

During the Palu earthquake and tsunami in 2018, a similar pattern was observed in Central Sulawesi Province. In 2017, the Central Sulawesi government provided only 0.1 to 0.3 percent of the total regional budget for disaster mitigation.

Indeed, based on the historical occurrence of earthquakes in Indonesia that claimed thousands to hundreds of thousands of lives, as well as earthquake records, and the location of the Indonesian country that is prone to disasters, damaging earthquakes could occur again.

A magnitude 8.9 megathrust earthquake in southern Java and southwest Sumatra is possible. This earthquake has the potential to cause a 34-meter tsunami. The government must prepare by implementing mitigation measures so that the impact is not as severe as the earthquake in Cianjur, which killed hundreds of people.

Natural disasters have previously been predicted, besides a 34-meter tsunami caused by a megathrust earthquake in the south of Java Island to Sumatra, like the Palu liquefaction phenomenon, which was predicted in 2012 and occurred in 2018. However, this prediction received little attention, as the government took only minor mitigation measures during the Palu earthquake.