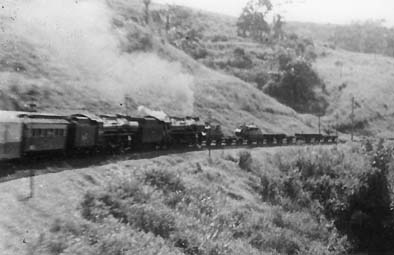 Trains first appeared in Indonesia in the mid-nineteenth century to meet the needs of commodity transportation. Since implementing the Cultivation System in Java, the Dutch East Indies had become one of the world’s largest exporters of agricultural commodities and had been linked to international trade networks.

Increasing agricultural production caused an increase in transportation systems and technology. Transportation modes that were fast, efficient, and capable of carrying large volumes were essential for smooth distribution.

At the time, the corners of Java were already linked by road. Its condition, however, was not very good. Since the 1840s, various ideas for building a railroad in Java had emerged as a solution to this transportation problem.

However, the railway line in Java did not become operational until two decades later, after a lengthy tug-of-war. The first railroad line ran from Semarang's Kemijen Village to Tanggung, which is now part of the Grobogan Regency area.

The Nederlandsch-Indische Spoorweg Maatschappij (NIS) built the line on June 17, 1864. This line began operations three years later, on August 10, 1867. The railroad line was then constructed from Tanggung to Vorstenlanden.

From 1868 to 1873, this line was built in six stages. Sugar, indigo, tobacco, and coffee were all transported to the port city of Semarang via this route, which ended in Yogyakarta.

The SS Connects Surabaya and Madiun

NIS got a concession to build another line after successfully connecting Semarang and Vorstenlanden. The construction, however, was halted because NIS's financial situation remained precarious. The reason for this is that NIS had committed to building the Semarang-Vorstenlandan route and the Batavia-Buitenzorg route.

The Dutch East Indies government finally established the Staatsspoorwegen (SS) state-owned railroad company on April 6, 1875, to continue its railroad project. Soon after, SS was tasked with constructing a railroad connecting Surabaya, Pasuruan, and Malang. That is one line NIS did not construct.

The route from Surabaya to Malang would go through Pasuruan. The goal, of course, was to speed up agricultural commodity transportation in the three regions. Sugar was an important product from the area through which the route passed, particularly in Pasuruan.

The SS was tasked with constructing a route to Kertosono, which would then branch off to Blitar and Madiun. The SS began operating the route to Madiun, in particular, on July 1, 1882.

The capital was also a factor in the construction of new railroads. The colonial government did not want to overlook the potential absorption of commodities like coffee, sugar, and rice from Madiun and its environs. Rice was the most abundant crop grown in Madiun and its surrounding areas, such as Pacitan. Meanwhile, Ponorogo, which was also high in sugar and teak wood, existed.

The SS also published a plan to connect Surabaya and Vorstenlanden via Madiun, motivated by the need for expansion and maximum absorption of Java's interior crops. The construction of the Madiun-Vorstenlanden line was approved in Staatsblad No. 138 on May 25, 1880.

The SS rail would traverse lowland terrain. As a result, no special techniques were required to realize that path. The Madiun-Vorstenlanden route would cross several major rivers, including the Bengawan Solo. The solution was simple: construct a bridge.

Following the appointment of SS as the developer of the Madiun-Vorstenlanden line concession, several businessmen joined in. They proposed constructing a line connecting Madiun and the surrounding area.

All concessions were refused by the colonial government. However, in the twentieth century, the SS built several routes proposed by the private sector, including Madiun-Ponorogo, Ponorogo-Slahung, and Ponorogo-Badegan.

The reasoning is that agricultural products brought from Ponorogo or the surrounding area would be transported and stored in Madiun before being transported to the ports of Semarang or Surabaya.

The 157-kilometer Madiun-Vorstenlanden line was built in three stages. The first stage was 26 kilometers long, stretching from Madiun to Paron. The second line then ran for 42 kilometers between Paron and Mojosragen. The third line ran from Mojosragen to Surakarta and was 29 kilometers long.

On May 29, 1884, the Madiun-Vorstenladen line was officially inaugurated. However, several Surakarta residents staged a protest before the inauguration ceremony began. Residents' dissatisfaction with the SS rates sparked the demonstration.

The inauguration ceremony was lively. The SS hosted a party, which was attended by officials, businessmen, and Sunanate and Mangkunegaran representatives. The inaugural day was marked by the operation of an SS train from Madiun to Mojosragen. The train then resumed its journey until it arrived in Surakarta. The arrival of the inaugural train was greeted enthusiastically by the invited guests.

The SS then installed several new stations and a telegraph network on this line. Not to mention the building of commodity storage warehouses around the stations. This alternative route provided several advantages to the colonial government. This route connected the locations of the production source and the ports. Mobilizing the military was made easier.