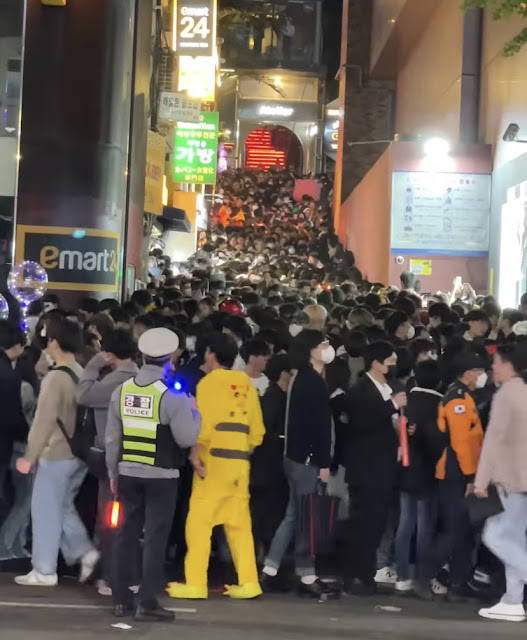 The Halloween celebrations in Itaewon, a neighborhood in Seoul, South Korea, came to a sad end. On October 29, 2022, the tragedy killed at least 156 people, most of whom were in their 20s. There were 22 foreigners among the victims who died.

Itaewon was packed with people celebrating Halloween. People in the area, as well as medical personnel, were seen performing cardiopulmonary resuscitation (CPR) on victims who were lying on the streets.

The incident also resulted in many injuries. There were 82 people injured, 19 of them critically. Following the incident, President Yoon Suk-yeol declared a period of national mourning and designated the popular Seoul neighborhood of Itaewon as a disaster zone.

As information about the progression of this event continues to circulate, dubious narratives about the COVID-19 vaccination are widely circulated in cyberspace. An upload suggests that the AstraZeneca vaccine was the source of the blood clots that caused the cardiac arrest.

Is it true, however, that the vaccine caused the Seoul Halloween crowd crush? Is the AstraZeneca vaccine associated with blood clots?

Over 100 thousand people attended the festival, which took place on October 29, 2022, at 22:20 local time. The mob attempted to enter a narrow alley near the Hamilton Hotel in Itaewon, resulting in a rush and cardiac arrest.

The reason for the crowd in the alley is unknown. However, a witness at the scene stated people were falling "like dominoes," and that some victims were bleeding from the nose and mouth while receiving CPR.

South Korean Prime Minister Han Duck-soo has promised that the case will be inspected. Similarly, authorities stated they would concentrate on reconstructing the sequence of events and determining who should be held accountable. After witnesses reported the relatively small number of police on the streets because of the size of the crowd, the press and netizens called for accountability.

Hundreds of thousands of people dressed in Halloween costumes have reportedly flooded Itaewon's small, winding streets in search of bars and clubs. Previously, the district announced plans to hold Halloween celebrations in Itaewon on October 28, 2022.

The show, which drew enormous crowds, lacked official organizers and crowd control protocols. Only COVID-19 preventive measures, safety checks for bars and restaurants, waste management, and anti-drug policies were specified by the authorities.

At a press conference on Monday, police said they had sent 137 officers to the event, a significantly higher number than in previous years. However, according to local reports, most of the police deployed are focused on drug use and traffic control rather than crowd control.

The number of visitors to the Itaewon Halloween party at the time was indeed quite large, as the celebration had been hampered for the previous two years by pandemic social restrictions. Saturday night, October 29, marked the first Halloween since South Korea lifted the restrictions, eliciting excitement from both Seoul residents and international visitors.

Not to mention that Itaewon has long been a place for Halloween celebrations, owing to the country's recent popularity as a holiday destination in Asia. Some foreign residents are even willing to fly to Seoul to join in on the fun.

There is no mention of the vaccine as a probable cause of the Itaewon tragedy.

We then looked into the AstraZeneca vaccine's link to blood clotting concerning the most recent findings of a study published in the British Medical Journal (The BMJ) on September 16, 2022.

The researchers emphasize the syndrome is extremely rare, but that the risks they discovered "should be considered when planning future immunization campaigns and vaccine development."

TTS develops when a person has blood clots and a low platelet count. This is not the same as common clotting conditions like deep vein thrombosis or pulmonary embolism.

The data show a 30 percent increased risk of thrombocytopenia after the first dose of Oxford-AstraZeneca versus Pfizer-BioNTech based on a study of approximately 10 million people from Europe and the United States.

Importantly, this was an observational study, and the researchers admit that the rarity of such events, as well as incomplete vaccine records, may have influenced the findings. They cannot rule out the possibility that some of the observed risks are caused by unmeasured or confounding factors.

As of September 24, 2022, the British Heart Foundation (BHF) reported 444 reported cases of people developing rare blood clots associated with thrombocytopenia after receiving doses of the Oxford-AstraZeneca vaccine in the UK alone.

The British Heart Foundation also emphasized that the benefits of the Oxford-AstraZeneca vaccine continue to outweigh the risks.

Investigations into the causes and chain of events of the Halloween tragedy in Itaewon are still ongoing. Even though The Guardian, among others, discovered that the event drew enormous crowds and lacked official organizers and crowd control protocols, there are no reports that the AstraZeneca vaccine was involved in this incident.

Concerning the AstraZeneca vaccine causing blood clots, a BMJ study found a 30 percent increased risk of thrombocytopenia after the first dose of Oxford-AstraZeneca compared to Pfizer-BioNTech. However, because this was an observational study, the researchers admit that the rarity of such events, as well as incomplete vaccine records, may have influenced the findings. There may be unmeasured factors.

Blood clots as a side effect of the AstraZeneca vaccine are said to be extremely rare, affecting only 4-6 people out of every million who receive it. As a result, the uploaded claim citing the vaccine as the cause of the Itaewon incident is misleading.