When the music of Led Zeppelin was accused of celebrating Satanism 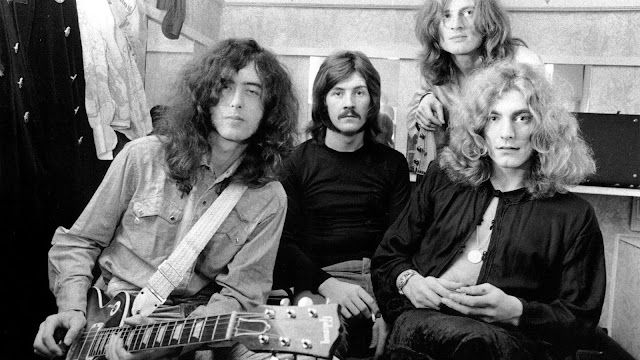 Robert Plant's eyes filled with tears. It was as if he saw John Bonham come to life again, play with fire, especially when "Stairway to Heaven

" was delivered by the duo of Heart, Ann and Nancy Wilson. In fact, sitting behind the drum set was Jason Bonham, John's son.
Jimmy Page was seen enjoying the performances of other musicians, both in the same age and junior, on other popular Led Zeppelin numbers. John Paul Jones sat beside Plant. He also showed a happy face throughout the event. Every now and then, he was struck by the little surprises.
The 35th Kennedy Center Honors on September 12, 2012, took place with great fanfare. Led Zeppelin was rewarded with many things: prestigious awards, the opportunity of a balcony with 44th President Barack Obama, and, of course, the applause of the audience.
Chubby actor Jack Black who was assigned to introduce Led Zeppelin uttered a joke, "They say that Led Zeppelin sold their souls to Satan. Come on, guys, you know you did. There's no other way to explain your ungodly talents."
Some of the audience giggled.
"While you're in hell, the human race will cherish your heavenly jams till the end of time."
Almost the entire audience laughed out loud.
Now it was easy to laugh at the joke. In a time when society became more rational, conspiracy theories from the mouths of a handful of spiritual community leaders were increasingly ignored. However, there was a time when the frying up of the issue warmed the public's conversation, as well as a memorable memory for Plant and his friends.
In January 1982, for example, Paul Crouch claimed many popular rock songs had hidden messages. "Stairway to Heaven" was one of them, said the co-founder of the Trinity Broadcasting Network.
Erik Davis was the author of the claim. In Led Zeppelin's Led Zeppelin IV

, Davis wrote that Crouch used the technique of playing songs in reverse (backmasking) so that hidden messages could be heard.
After being reversed, Crouch claimed the lyrics: If there's a bustle in your hedgerow, don't be alarmed now, would sound like: Here's to my sweet Satan. There was a little toolshed where he made us suffer, sad Satan.
YouTube contained a lot of content on this issue. The reaction of some who believed him was far less than what made him a laugh, or at least considered it an outrageous conspiracy theory. The fans believed more in what Plant said to the media crew. On Rolling Stone, for example, the vocalist called it a mere coincidence.
"Who on earth would have ever thought of doing that? You've got to have a lot of time on your hands to even consider that people would do that."
The band's crew had similar comments: Tucking Satanist's lyrics upside down was stupid and a waste of recording time. The label owned by Led Zeppelin, Swan Song Records, issued a statement: Their music only went in one direction: progressions.
Once again, today's society was different from the previous one. The issue of Satanism that developed from the 1960s to 1970s was still considered a real threat to some conservative societies.
Massimo Introvigne, an Italian sociologist who pursued new religious movements or their splinters, in Satanism: A Social History

, explained how the mass fear in the 1980s spread across the plains, then was exported to England, Australia, and other countries.
Not surprisingly, a California lawmaker at the time proposed creating a state bill, which would force cassette producers to post a warning about hidden Satanist lyrics.
Before social media brought musicians and the world community closer as it was now, many thought all kinds of things about Led Zeppelin. Plant and Page made this point during an exclusive interview with Rolling Stone's Cameron Crowe, March 1975.
The 1975 Tour was made as an attempt to better introduce the band. Plant heard word of mouth that the band's hobbies were to eat girls and throw their bones out the window.
The charge of Satanist lyrics was only one case. Another problem came from one of Page's idol characters, Aleister Crowley.
Crowley was born in Warwickshire, England, on October 12, 1875. Throughout the seven decades of his life, before dying on December 1, 1947, Crowley was known in history as a master of magical rituals, as well as an occultist.
Occultism referred to belief in supernatural things, especially witchcraft. Crowley founded the Thelema religion and identified himself as the prophet who would lead mankind to the Æon of Horus in the early 20th century.
It sounded childish, but beyond that persona, Crowley had a philosophical basis, albeit odd to general concessions. He was not crazy. In fact, he was known as one of the most influential figures in the spiritual community and Western counterculture. Crowley had been discussed by Ronald Hutton, a British historian who studied contemporary paganism, including theory and practice of belief, in The Triumph of the Moon

.
Crowley was both paradoxical and ambiguous. Hutton interpreted some of Crowley's works to show his atheist side. Another part could be interpreted that Crowley adhered to polytheism while others believed that he was a monotheist-mystical actor.
Crowley had another title pinned by the media: Satanist. He refused. He just didn't agree with a Christian perspective on Satan. He did not practice human offering, yet he did enjoy the adherence of this sensational view to his image in the outside world.
Although he refused to be called a Satanist, he often used symbols, such as calling himself the Beast 666. He had anti-Christian sentiments and had sent Antichrist cards to friends. In one writing, he sometimes identified the supernatural being in his belief, Aiwass, as the Devil.
Jimmy Page couldn't help but have to explain why he idolized Crowley. The rumors were already at the stage of Page selling his soul to the devil in order to gain popularity as a rock star.
Page, in another exclusive interview with Rolling Stone, expressed surprise that so many people asked him about Crowley. Yet Page idolized thinkers, poets, and other artists. However, Page knew the answer. People would always associate himself with Crowley for gossip about Satanism.
Page and Crowley first met when he was aged 14–15. At that time, he was reading The Great Beast

by John Symonds. Curiosity led him to read Crowley's other literature, along with his thoughts.
There was no evidence Page was a Satanist. Still, Page believed in Crowley's philosophy of self-liberation. Page also took on Crowley's famous dictum: Do what thou wilt, and was included in the release of the original Led Zeppelin III

.
Not only that, Page bought Crowley's former home in Loch Ness, Scotland. There were two or three other owners before Page got it.
Page's motivation to buy the house was driven by his curiosity about mysterious things. Page didn't like to indulge his personal beliefs or engage in mystical things. He let people find inspiration in his home in Loch Ness, as well as his other home in the Sussex area.
As the founder of Led Zeppelin, Page had described Led Zeppelin as magic. Some people did feel that aura as if the band wanted to present something beyond tone and beat, which made fans feel enchanted.
Perhaps Page and his friends had spiritual beliefs. Maybe they just made it the main inspiration in their works, like other music groups. The controversy would remain alive as long as there were a handful of people who liked to chew on mystical conspiracy theories.
Led Zeppelin disbanded on December 4, 1980, today 40 years ago, after their drummer, John Bonham, died.
Music