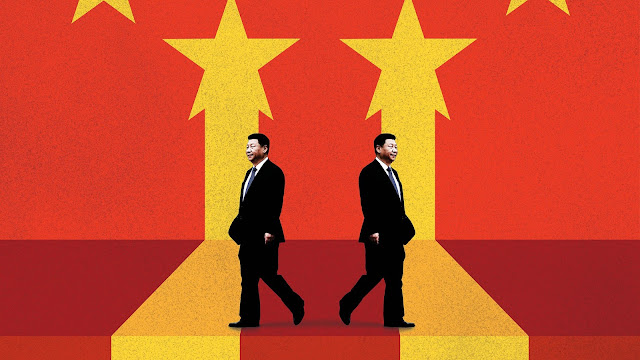 Since the beginning of the 21st century, China has aggressively dominated the world economy. China has all the capital it needs from a modern trading strategy, wealth of resources, vast territories, to a large population bubble. In the next 20 years, China is predicted to become a superpower and defeat America's domination.
Such is the thesis of Norwegian historian Odd Arne Westad in his book Restless Empire

. According to Westad, China's ambition to increase energy capacity for people's welfare and life expectancy to 80 years should also be considered important. Not only that, but China is also developing 5G network technology to support the modernization and urbanization process.
All of this influences the growth of consumerism in Chinese society. The tea trade in China, for example, had reached 260 million pounds in 1840. This high tea consumption was also met by a subsistence mechanism.
Kenneth Pomeranz in The Great Divergence

noted that tea-producing regions, such as Anhui, had experienced a production surplus since the 19th century. The tea from there was more than sufficient for the needs of the domestic market and was able to meet export needs.
The consumerist culture of Chinese society isn't only stimulated by passionate trade. Since the 1970s, the Chinese government has also supported trade with a policy of currency devaluation, developing a factory system, and maximizing exports.
This structured long-term plan has proven to produce positive results. State revenue reaches 13 trillion dollars per year. By the end of 2020, China's revenue target is projected to double.
China's aggressiveness makes other countries, especially its neighbors, tremble. With its great economic power, China can certainly impose its interests in the region. Regional countries will be helpless in negotiations because they have already lost the wind.
In contrast to China, America, which has been called a superpower, has begun to struggle in facing economic competition in modern times. James Fallows, a columnist for The Atlantic, has discussed the dangers of the fall of the empire. Fallows analogized America as Rome that was exhausted because of an all-out attack by barbarians.
There are two indicators that Fallows notes. First, before its demise, Rome was busy with the chaos of domestic problems, ranging from the complexity of slavery, a too-large area, to tyrannical leadership. For Fallows, that is happening right now.
Like Rome, according to Fallows, the government is unable to solve its domestic problems. The turmoil of national politics further weakens America from within.
Second, after the fall of the Roman Empire, European civilization entered a new era that had never been imagined before. During the era known as the Dark Ages, there was a religion that dominated people's lives, and there were epidemics of deadly diseases. It took hundreds of years before European society finally entered the Renaissance, an era of renewal.
In this day and age, the chances of physical warfare taking place are slim. Modern warfare has turned to economics and monetary matters. China is clearly ahead of its massive industrial arsenal, the support of an almost unlimited supply of raw materials, and a growing number of the cheap labor force.
In the field of international trade, America's exports have also been relatively weak compared to its competitors. The Investopedia page says that many companies are increasingly dependent on China. Without demand from the Chinese market, these companies will fall into cutting operating costs or even have to lay off their workers. This is what has resulted in an increase in the number of unemployed.
Not everyone thinks Fallows's view is correct. Robert Kagan, for example, has a different opinion. The senior official at the State Department presented his analysis in an interview with the Brookings Institution, an organization that studies public policy.
Kagan's analysis is quite reasonable, considering that development and economic stimulants in China often become blunders. The accumulated problems have the potential to become a time bomb for China.
Feeling that it has a lot of resources, the Chinese government has poured out large funds to build infrastructure and new business centers. Apartment buildings and luxury shopping centers are being built everywhere to cater to the culture of consumerism. Economic growth is also maintained to remain positive.
The Chinese government is also preparing steps to anticipate an explosion in the middle-class population, which has now reached 70 million people. The Chinese government also had plans to build 23 modern cities that could accommodate a population larger than New York.
In fact, these giant plans often go wrong. In the city of Dongguan, for example, the Chinese government built the South China Mall. This luxury shopping center can accommodate 1,500 shops and is claimed to be the largest mall in the world. The developer had a projection that an average of 70 thousand people would fill the mall every day.
South China Mall was completed and opened for business in 2005. Two years later, businessman Stephen Liu visited his partner at South China Mall and concluded that the construction was a mistake.
In 2007, The New York Times wrote that South China Mall is a symbol of the Chinese government's overestimation and mistake in stimulating the purchasing power of its people.
China's economic growth since 2010 has also shown a downward trend. The country's gross income decreased from 9.3 percent in 2011 to 7.4 percent in 2014. The downward trend was again seen in 2019. Therefore, the purchasing power of Chinese people is no longer as strong as it used to be. Millions of apartments that have been prepared by the Chinese government are abandoned.
The winner of this economic competition is likely to be seen in the near future. So, is China's economic strength really as strong as it seems? Or, will America still be able to maintain its dominance?
Sociology