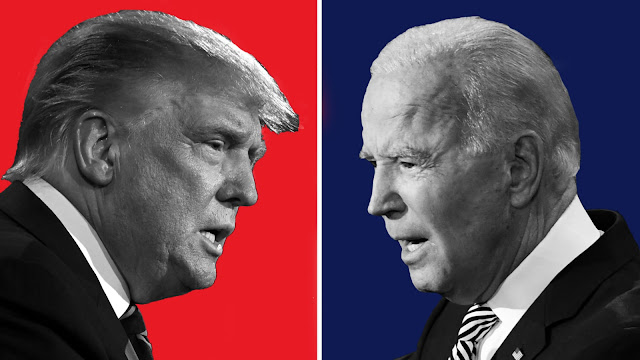 The presidential election is near. The future of the incumbent Donald Trump in the White House will be determined. So far, national polls have shown Biden ahead at over 50 percent while Trump is in the range of no more than 45 percent. Even so, the popularity of the former vice president of the Barack Obama era in national polls does not guarantee his victory in the presidential election. This is because the president is elected based on an electoral college, not a popular vote.
During his campaign and open debate sessions, Trump still describes himself as an outsider as he was four years ago. He has repeatedly said that he is not a politician. Meanwhile, Biden called Trump an incompetent leader of a country facing many crises.
It is not only national issues that are in the public spotlight. The whole world is currently predicting the fate of allies when one of them is elected.
Over the past nearly 70 years, the US built an unprecedented network of major alliances to stem the influence of the Soviet Union. The North Atlantic Treaty Organization (NATO), for example, was founded with 11 countries located in Europe and North America. Washington also created defense alliances and established local military bases to expand the scope of anti-communist politics in East Asia. This alliance also allowed member states to receive protection if attacked by opponents such as North Korea, China, and the Soviet Union.
This Washington imperial strategy was quite successful. The Third World War that was feared during the Cold War never happened. The US even won the Cold War in 1991 when the Soviet Union collapsed. However, in recent decades, relations between the US and its legacy allies have appeared strained, and their relevance is questioned. Under the Trump administration, US estrangement from allies was no longer covered up. Some heads of government have even encouraged their countries to be more independent in defense matters.
In trade war policy, for example, Trump made the European Union the second scourge after China. On the defense front, Trump questioned the commitment of NATO countries. John Bolton, a former national security advisor, even predicted the US might withdraw from NATO if Trump was re-elected. Early in his administration, Trump announced his country was withdrawing from the Trans-Pacific Partnership (TPP), the Iran nuclear deal, the Paris Agreement, and many more.
A 13-country poll conducted by the Pew Research Center in September 2020 showed that America's reputation in allied nations had steadily declined over the past years. Two out of three Europeans have a negative view of Washington. In Germany, young voters are even more eager to see their country forge closer ties with China than the US.
If Trump wins, US foreign policy will continue to distance Washington from its traditional allies. On the other hand, Trump's decisions during the second term are very difficult to predict.
Trump will defend his America First policy. This means that the US will act unilaterally without involving the consideration of allies. Trump, for example, will continue to be tough on China and brag about the importance of national security. Trump's tendency to forge ties with global autocrats like Putin, Kim Jong-un, to Erdogan will also continue.
Trump will be very confident in the outcome of his victory and will take bold steps such as withdrawing from NATO membership, ending defense agreement commitments with South Korea, Japan, and Australia, and reducing the US military presence abroad.
As the US and European allies drift further apart, Trump will turn to Asia and strengthen ties through the Indo-Pacific Quad made up of Japan, Australia, India, and the United States to dispel Beijing's influence. James Crabtree, a lecturer at the Lee Kuan Yew School of Public Policy in his analysis for Foreign Policy said officials in Tokyo, Taipei, New Delhi, Singapore, and so on were relatively comfortable with Trump's tough approach to China so far. On the other hand, the prospect of Biden winning the election reminds many Asian leaders of the Obama administration period they considered lenient with Beijing.
However, on a closer look, Trump's attitude has never been consistent. Trump's commitment to allied nations, particularly in East Asia, cannot be relied on. The reason is, Trump often complains about the large budget that the US has spent to finance troop operations in East Asia. For leaders of countries like South Korea and Japan, Trump's complaints meant downplaying their worries over North Korea's missile tests.

Biden wants to come back

Joe Biden is known as a veteran politician in foreign policy affairs. As vice president, Biden was influential in shaping the Obama administration's foreign policy from diplomacy and alliances to global trade and economy to defense and the use of military force.
A YouGov poll in mid-October showed a majority of western Europeans were very hopeful of Biden winning the election. Both Democrats and Biden vowed to undo many of decisions Trump had made, including to normalize Washington's ties with old allies.
Biden is a supporter of the translantic (US-EU) alliance. He is predicted to convince NATO and rejoin the Paris Agreement and improve relations with the World Health Organization (WHO). He is likely to work with E3 (Germany, France, and Britain) to finalize a nuclear deal with Iran that Trump undermined. It is also predicted that Biden's policy will rebuild new energy sources in the country, including allocating investment in infrastructure projects and technological innovation to strengthen its position in the global eye.
Some EU officials hope Biden's victory could restore US-Europe relations. Analysts predict that the Biden administration will affirm its commitment to alliance and unilateralism but will take a less active stance on global affairs because of its focus on domestic issues. The reason is, Biden will feel limited by the lack of public support, especially after the progressive wing on the body of the Democrats, which recently gained strength, to sit in the Congress. It is also predicted that Biden will refuse to strengthen NATO further and withdraw large numbers of US military troops abroad.
In Asia, Biden is expected to seek to strengthen ties with old allies including South Korea, Japan, and Australia, and forge closer ties with developing countries such as India and Indonesia. For relations with China, Biden is not expected to be much different from Trump. He worries about China's power, which he says it will continue to rob US technology and intellectual property. The difference with Trump is that Biden is predicted to use a soft approach in Chinese affairs. Biden will address the issues of human rights violations in China.
Chinese leaders hope Washington can defuse conflicts over trade, technology, and security if Biden wins. The problem is that US-China relations have fallen to their lowest level in decades amid a series of conflicts over the coronavirus pandemic, technology, trade, security, and espionage activity. Legistalives, both Republican and Democrat, seem reluctant to adopt a softer approach to China.
Politics