The Balfour Declaration: when Britain supported Zionism in Palestine 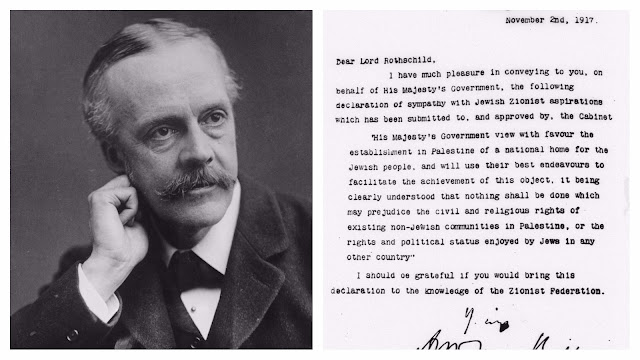 In the English version, the letter from British Foreign Secretary Arthur Balfour to the leader of the Jewish community in Britain Lord Walter Rothschild contained a total of 67 words. History recorded it as the Balfour Declaration, an agreement that became the seed of the birth of the state of Israel and started political upheaval in the Middle East that could not be extinguished to this day, according to Jonathan Schneer in his book The Balfour Declaration: The Origins of the Arab-Israeli Conflict

.
The Balfour Declaration became the official statement of the British government to support the establishment of the homeland of the Jewish people in Palestine, the territory which was under the control of the Turkish Ottoman Empire. At the end, Balfour stated that the letter was also forwarded to the Zionist Federation in England and Ireland. It wasn't until November 9, 1917, that the British press released it to the public, but the plans to move British and European Jews to Palestine itself could be traced back two years before.
Britain declared war in 1914, the year the first World War began. The British War Cabinet then began to formulate a political strategy for the future of the Palestinian territories, of course, within a framework that favored British interest. The end of 1917 marked the time for the drafting of the Balfour Declaration and the lobbying by high-ranking European Jewish communities with the government of the British Empire, especially with the foreign ministry.
The first elite-level negotiations between the British and the Zionist group can be traced to February 7, 1917, at a conference that was also attended by Balfour and other senior Jewish community leaders. In a follow-up discussion on June 19, Balfour asked Rothschild and his friend, who would become Israel's first president, Chaim Weizmann to draft a public declaration.
The two of them complied with Balfour's request and then discussed it with the British War Cabinet during September and October of the same year. There were a number of Zionist and non-Zionist Jews in Britain who provided input.
The most basic problem of the draft was the absence of Palestinians from the initial talks, discussions on the draft, to the declaration actually published to the world community. This absence, in the eyes of historians, had made the Balfour Declaration unfair. The Balfour Declaration was also considered to be the main reason why the Zionists were seen as a cunning group since its inception.

The seeds of Palestinian oppression

The first paragraph of the Balfour Declaration represented the support of the United Kingdom as one of the great world powers at that time to the ideology of Zionism. There was debate over the use of the term national home as it did not have a precedent in international law. As a result, British politicians and Zionists themselves were divided on whether the real form of the national homeland was a state or not, noted The Washington Post.
The British government was then busy explaining that the words in Palestine in the declaration meant that the new home of the Jews did not cover the entire territory inhabited by the Palestinians, which at that time consisted of the majority of Muslims, then Christians, then Jews.
The second part of the declaration covered matters which satisfied those who are critical of the Zionist mission. These parties understood that, in practice, the Zionists and the British government must inevitably annex a territory. The consequences of this action must be considered in the future; two of the main ones of which were the expulsion of the Palestinians from their land and a significant strengthening of anti-Semitic attitudes on a global scale.
The Balfour Declaration clearly stated that the Zionist Jews demanded that their political rights be fulfilled by the Palestinians. Meanwhile, the Palestinians themselves did not enjoy the same political or religious rights. The Balfour Declaration, in other words, was another form of British-backed Zionist colonialism. The British government only regretted the absence of Palestinians in the drafting of the declaration in 1939. A century later, or in 2017, that regret had not diminished but had added to the heated criticism for the British government.
The persistence of remorse was based on a crucial and latent effect after the Balfour Declaration was released and Jews in Europe began to be transported to the Palestinian territories throughout the 1920s and 1940s. The conflict arose and took the lives of many Palestinians who did not know anything other than that suddenly they were evicted from their places of residence which had been inhabited for generations and would have dire consequences if they refused.
The long and tiring process based on the British Mandate for Palestine culminated in 1948. The Jews in Palestine by then had turned into a military force capable of expelling and killing more local people. In the same year, the state of Israel was founded. Throughout the decades that followed, they continued to annex Palestinian land, creating waves of mass evictions, killings, and other human rights violations.
The Israeli-Palestinian conflict was considered the most latent dispute in the history of world civilization. The belief of the Muslims actually predicted this conflict to be eternal. The Balfour Declaration also changed the face of the Middle East forever. Arab countries until the 1960s fought repeatedly against Israel for their defense for Palestine, but the results were always disappointing. Some had chosen to make peace; others were still continuing to fight their nerves against Zionist gangs in Israel.

From Ramallah to South Africa, they criticized Balfour

In many places, the centenary of the Balfour Declaration had been met by protests rather than celebrations. In a BBC Online report, legendary British artist Bansky organized a street party in Bethlehem, West Bank. Apart from being a medium of protest, the event was also held as a symbol of apology for the mistake of the British government in the past because it gave birth to a ruthless Zionist regime.
Thousands of residents of the city of Ramallah also gathered on November 2, 2017, for a peaceful demonstration on the streets and moved toward the centers of British culture. Mahmoud Abbas supported the event. As Aljazeera.com reported, he stated that the Balfour Declaration was the beginning of 100 years of expulsion and occupation of his nation. Britain should make amends, Abbas said, not celebrate. Abbas revealed the same thing in his column published by TheGuardian.com on November 1, 2017.
A number of demonstrators also gathered at the British consulate building in East Jerussalem. Middle school children who participated in the action wrote letters and handed them over to the consulate. They stated how they felt about the declaration. Others collected signatures up to the number of 100 thousand sympathizers.
In South Africa, hundreds of people gathered in front of the Israeli embassy in the city of Pretoria on November 2. The protesters wore red shirts and shouted calls for an end to the practice of ethnic cleansing against Palestinians. They danced and sang in the spirit of modern anti-colonialism under heavy guard from the authorities.
Unfortunately, these voices were not in line with the attitude of the British prime minister at that time, Theresa May. She celebrated 100 years of the Balfour Declaration with Israeli Prime Minister Benjamin Netanyahu who was invited to a joint dinner at Lanchaster House, London, BBC Online reported.
Unlike the Labour Party figure Jeremy Corbyn who was pro-Palestine and rejected all forms of colonialism, May chose to sympathize with Israel. She supported the Balfour Declaration, and she was proud to be part of the government of the country that had initiated it.
Politics