Secret archives and attempts to prove the Kennedy assassination speculation 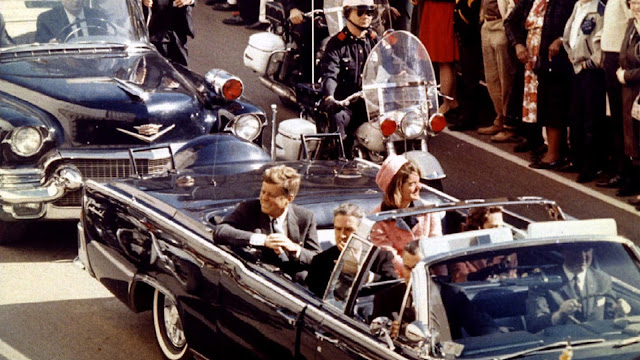 On October 26, 2017, thousands of classified documents held in the National Archives were released. There were 2,891 pages published regarding the assassination of the 35th President in November 1963.
Kennedy's death was controversial. Public interest was still high to find out what really happened and the big motive behind the murder of the Navy veteran.
In 2013, a poll conducted by Gallup showed that no less than 61 percent of Americans believed an actor other than Lee Harvey Oswald was involved in the Kennedy assassination.
In the poll results, 13 percent believed the mafia and the federal government conspired to kill Kennedy; 7 percent the CIA did it, and 5 percent Fidel Castro. The rest said Kennedy was killed because a handful of interested people were annoyed by his policies.
John F. Kennedy was assassinated on November 22, 1963. At that time, Kennedy and his wife and bodyguards drove an open limousine across Dealey Plaza in Dallas. Suddenly, a bullet hit him in the neck. Seconds later, another bullet pierced Kennedy's head and injured Texas Governor John Connally who was sitting opposite him.
Not long after, a man named Lee Harvey Oswald was arrested on charges of shooting. Oswald was never tried because a nightclub owner named Jack Ruby killed him two days after his arrest, or on November 24, 1963, today 57 years ago.
The FBI and the Warren Commission in charge of investigating the Kennedy assassination case for ten months concluded that Oswald was the lone assassin perpetrator. Meanwhile, investigations conducted by the FBI in 1978–1979 concluded that it was likely that other armed parties shot Kennedy.
The two conclusions competed with each other. The lack of transparency and the fact that the time of the killing and investigations coincided with the height of Cold War tension had spawned a variety of conspiracy theories surrounding the Kennedy assassination from the most inconsequential to the serious ones.
ABC News in 2004 released the results of a poll, which stated that 70 percent of the public believed that Kennedy's death was the result of a major conspiracy. The direction of the bullet's trajectory was deemed incompatible with the place where Oswald perched, the sixth floor of the Texas School Book Depository.
Most of JFK's murder conspiracy theorists revolved around the idea that Oswald didn't act alone. When President Kennedy was hit by the bullet that killed him, the motorcade passed through a grassy hill on the north side of Elm Street. Local newspapers noted that shortly after the shooting, police arrested three people behind the hill. The characteristic cropped hair and well-dressed suits gave rise to speculation that they were CIA agents.
Other speculation developed. If Oswald was an assassin, who gave orders and rewards?
Conspiracy theorists said the CIA had a role behind Oswald and the three men behind the hill who were suspected by local police. One of those mentioned was Howard Hunt, a former CIA agent who was involved in the Bay of Pigs Invasion to overthrow Fidel Castro.
Mafia groups were also a candidate for the supporters of Kennedy's death. During his leadership, Robert Kennedy as the Attorney General at that time was in the middle of a war against the mafia. The number of senior mafia figures arrested had exploded.
The Soviets had a clear and strong motive for killing JFK. This was done in response to the Cuban Missile Crisis situation in 1962. Through Oswald's more Soviet inclination, the KGB, the Soviet State Security Committee, had many opportunities to interact with him.
A mysterious person holding a black umbrella despite the sunny day when the Kennedy motorcade drove was also suspected of being the perpetrator. The only guy with an umbrella in Dallas was standing right where the shot went into the limo. Could anyone explain it?
Another analysis related to foreign policy also dragged the names of Indonesia and Sukarno into the grave of Kennedy being shot dead. In The Incubus of Intervention

, Sukarno became the center of the conflict between Kennedy and Allen Dulles as the director of the CIA. Dulles had a goal of removing Sukarno from power in Indonesia since Kennedy had not become president.
There was hope that the declassification of classified documents surrounding the Kennedy assassination would explain, refute, or, perhaps, confirm various analyzes that had been circulating. Even so, some documents were still being held because Donald Trump had received pressure from the CIA and the FBI for reasons of national security, as well as matters related to law enforcement and foreign relations. Trump then ordered federal agencies to review the remainder of the archive with a deadline of 180 days.
One of the first interesting documents unearthed was about a memo written by the director and founder of the FBI, J. Edgar Hoover, which said that the FBI had warned of death threats against Lee Harvey Oswald who was currently in police custody.
Hoover also admitted that he did not have complete information about the figure of Jack Ruby, the person who then shot Oswald to death. However, Hoover found out Ruby's real name was Rubenstein and noted rumors about his illegal activities so far.
The document also revealed that Soviet officials feared a conspiracy behind the President's assassination might be carried out by far-right groups or even Kennedy's successor, Vice President Lyndon B. Johnson.
The Soviets also feared a war following Kennedy's death. Soviet officials were nervous that a leadership vacuum could trigger adventurous generals to launch missiles at the Soviet Union.
The period of Kennedy's leadership was indeed passed by the escalation of the Cold War. A number of important events, such as the Bay of Pigs Invasion launched to overthrow Fidel Castro, the Vietnam War, and the Cuban Missile Crisis, occurred while Kennedy was in power.
Of course, the remaining documents would continue to be of interest to researchers trying to connect the mysterious dots surrounding the death of John F. Kennedy.
Politics