Rome collapsed due to internal conflicts and barbarian attacks 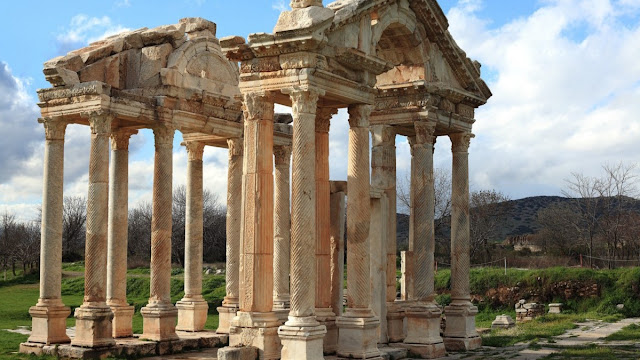 Once upon a time, the activities of a Jew named Jesus deeply troubled the Roman emperor. Roman rulers considered Jesus's teachings politically threatening the position of the emperor as king of the Jews. On the other hand, the monotheistic teachings that Jesus preached clashed with the pagan beliefs of the majority of the Romans.
So the imperial legion was sent to arrest him. The Roman legion finally captured Jesus. He was then executed by crucifixion, a punishment that was also applied to the criminals of that era.
After that, the Roman soldiers did not stop hunting for the followers of Jesus who was nicknamed the Savior. They were considered as a dissident group or sect. Many of them later met a fate similar to Jesus. However, Jesus's teachings never really disappeared.
For about three centuries, the followers of Jesus's teachings carried out Christian rituals in secret until Emperor Constantine announced the Edict of Milan in 313. It was the policy formulated by Emperor Constantine and his political rival Emperor Licinius. The Edict of Milan gave Christians legal status and freedom to practice the teachings of Christ throughout the Roman Empire.
Around this time, Helena, Constantine's mother, decided to become a Christian. In time, this tolerance was also applied to a number of other, very large sects. Since then, slowly, Christianity began to displace Roman paganism. In 380, Emperor Theodosius I established Christianity as the official religion of the empire.
According to the 18th-century British intellectual Edward Gibbon, the series of events was not simply the development of religion. For Gibbon, the development of Christ's teachings was one of the factors that brought the Roman Empire to the brink of collapse.
In The Decline and Fall of the Roman Empire

, Gibbon explained that the Roman ambition for worldly wealth and glory was at the root of its domination in Europe. The ambition was then faded by the Christian doctrine of life after death and heavenly happiness.
Of course, that was not a single factor. Long before Christianity was made the official religion, the Roman government had many internal problems. Such problems included a messy bureaucratic structure, power struggles, and divided loyalties. From the outside, Rome was also frequently attacked by barbarian nations.
The leadership crisis in the highest circles of power also triggered the collapse of Rome. In the early days of the empire, rulers were exposed to scandal and controversy. Gaius Caesar Augustus Germanicus, aka Emperor Caligula, ascended to the throne in 37 AD, for example, was known as a ruler who was greedy, emotional, and crazy about sex.
In addition, the citizens were subject to large taxes to cover imperial expenses, which were also very large. Many wealthy Romans were forced to relocate their homes to small cities to avoid imperial tax collectors.
One of the most wasteful expenditure items was military expenses. The budget for the Roman legion continued to grow over time because of its crucial task of stemming from the invasion of barbarians.
In its heyday, Rome had the most modern and most sophisticated military power in the whole world. Even so, the Roman military still struggled to stem the attacks of the Goths from many sides. The Goths were Germanic people who inhabited the area north of the Danube, now stretching around Ukraine, Moldova, and Romania.
In 238, the Goths conquered Histria. British historian Peter Heather in Empires and Barbarians

mentioned that after the conquest, the Goths began to settle in Roman territory. Even so, the attack came again from the Alemanni, a combination of Germanic barbarian tribes.
In the midst of an attempt to fend off the attacks of barbarians, Rome was still faced with food shortages. The growing population was not proportional to the food supply. Even so, the distribution of food to areas far from the center of power was not smooth.
Some of the Goths who settled in Roman territory also experienced a severe famine. This situation forced the Goth family to sell their children to survive. Sadly, a child was only valued by one dog.
Michael Kulikowski in the book Rome's Gothic Wars

wrote they sold their children to become slaves by the Romans. The pay was dog meat to eat.
This forced slavery due to starvation did not recognize the social status of the Goths. Even a child born into a Goth noble family ran the risk of being sold into slavery.
Even though they had no loyalty to the empire, slaves were still a mainstay of Rome to meet their labor needs. However, it was also slavery that brought Rome even closer to ruin.
Rome's dependence on slaves deprived it of its financial strength. Slaves were used not only for manual labor, but also for additional soldiers, tax collectors, accountants, and several other jobs.
Before the era of Constantine, Emperor Diocletian, who came to power in the period of 284–305, decided to take steps to maintain stability and improve the balance sheet. He divided the vast empire into two: the Western Empire with the seat of government in Milan and the Eastern Empire based in Byzantium.
This decision was proven to be wrong because the economic situation did not improve. On the other hand, the loyalty of officials and soldiers to the emperor was increasingly in doubt. After it was divided in two, communication between regions actually got worse.
After Emperor Diocletian died, civil war erupted. Emperor Constantine who succeeded him then decided to move the center of power to Constantinople. Since then, Rome had never been the same.
The predominantly Latin-speaking Western Romans faced a severe economic crisis. The government's routine expenditure was very large while the source of income from trade and natural products was insufficient. On the other hand, the Byzantine Empire became increasingly prosperous.
The imperial army was now increasingly overwhelmed by dividing concentrations to secure the two centers of government. However, the Byzantine defense was much better than Western Rome because it was more prosperous. With good economic resources, Emperor Constantine could ensure that the City of Constantinople was not touched by attacks from anywhere.
Meanwhile, the city of Rome, which was once the capital of the empire, was now very weak.
Weak Western Rome finally collapsed completely in the 5th century. The Goths' attacks were getting more intense than ever. Rome was completely divided permanently when Emperor Theodosius I died in 395. He did succeed in making Christianity the official religion, but it was during this time that the Roman military was destroyed by destructive wars.
Western Rome completely collapsed after the attack of the Germanic barbarians led by Odoacer in 476. Meanwhile, Byzantium was able to survive for another thousand years until it was finally conquered by the Ottoman Caliphate.
Sociology