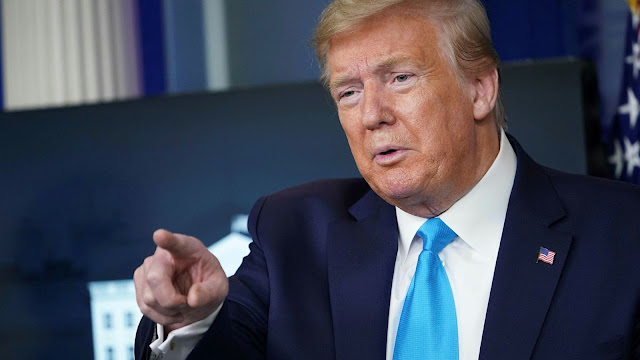 President Donald Trump and First Lady Melania were infected with the SARS-CoV-2 virus on October 2. In his social media account, Trump said he must undergo independent isolation in the White House as long as both were positive.
Trump's announcement came hours after senior White House counselor Hope Hicks tested positive after the past week of traveling on the campaign. Hicks was one plane with Trump.
World leaders wished Trump and his wife a speedy recovery amid preparations to hold presidential elections on November 3 or less than a month from now. In the 2020 presidential election, Trump would fight the former vice president, Joe Biden.
A week before being infected, Trump reportedly met many people during his visit as president and to join the debate. After Hicks tested positive, Trump and his wife were tested for COVID-19 and caught the results.
In his 73, it would exacerbate his corona infection, but the presidency doctor had stated that both were well. So far, he had been too confident that he could avoid COVID-19 even though up to now more than 200 thousand people had died from corona and more than seven million were positive during the pandemic.
Before being infected, Trump was lenient in handling corona. A series of attitudes had actually triggered polemics and obscured the impact of the corona, for example, when Trump cut ties with the World Health Organization last May after assessing the failure of China's intervention efforts to find out more about the coronavirus.
Since the pandemic broke out, China had been accused of deliberately creating this deadly virus and disseminating it to the world.
When Trump's decision was made, there were strong protests because WHO was focusing on vaccine development. The lost funds were thought to hinder these efforts.
During the presidential candidate debate, Trump insisted on holding China to account. Chinese authorities had repeatedly denied withholding information related to the pandemic.
After Trump was hit by corona, China's English media actually teased him because so far he had played down the impact of the coronavirus.

Reluctant to wear a mask

One of them concerned the neglect of health protocols to use masks even though the government itself recommended it.
Trump wore a mask for the first time in public while visiting the Walter Reed Army Medical Center outside Washington in July after months of coronavirus beating the US.
The Centers for Disease Control and Prevention (CDC) and WHO recommended masks early in the pandemic to prevent infection or infect others from droplets into the airborne respiratory tract. WHO currently stated that corona could be transmitted through the air, and this was dangerous because it could infect somebody without direct contact with goods or people.
Trump's decision on masks was one of the hot topics of discussion in the presidential election debate. Trump stated that masks were important, but one of his statements was criticized when he said that all debate audiences in the studio did not need them, which was enough to keep their distance and test for COVID-19.
He also seemed to mock Biden for always campaigning for the importance of masks. Trump claimed to have a mask in his coat and only to use it when needed.
In the policy against corona, Biden was passionate about health campaigns, in contrast to Trump who actually underestimated him. Trump's demeaning of masks was followed by thousands of followers in the presidential election campaign. Among other things, in the campaign in Nevada, only a handful of supporters wore masks and kept their distance. Trump's family members were also reluctant to wear masks, which was evident in a candidate debate.
This October was a crucial month for Trump. During the quarantine he could not campaign freely outside, so he changed the schedule.
Democrat nominee Joe Biden also feared catching it for being in a closed room for 90 minutes of debate without a mask two days before Trump tested positive.
When Trump announced positive, his campaign schedule was postponed. Meanwhile, his opponent continued to walk. Biden was scheduled to campaign in Michigan while Trump was in Florida but canceled because of the corona. The two states were said to be the keys to winning the presidential election. With Trump absent for at least two weeks of quarantine, support for Biden was expected to strengthen.
Politics