The cool hands of Bill Nicholson behind Tottenham's 1960s triumph 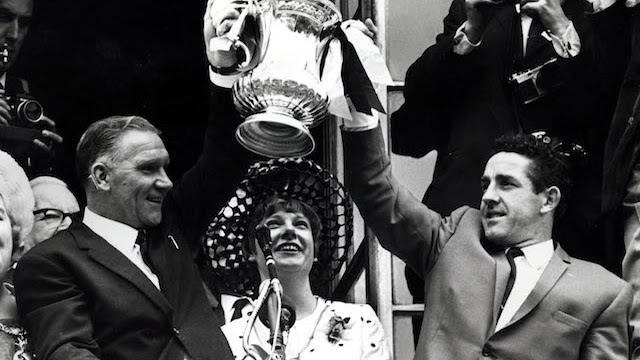 Willliam Edward Nicholson's career as a footballer is not as famous as Alfredo Di Stéfano or Ferenc Puskás who won various individual awards. The legend who is well known as Bill Nicholson began his professional career with Tottenham Hotspur against Blackburn Rovers on October 22, 1938.
Since then, his figure has always been close to Tottenham. Under manager Arthur Rowe, Nicholson was plotted to fill the center-back position. Together with the coach who is famous for his push-and-run playing style, Nicholson won the First Division title in the 1950–1951 season. Nicholson recorded 341 matches for Tottenham until his retirement in the 1954–1955 season.
Despite being successful at the club, his career at the national team level was quite short. Nicholson only had time to defend the Three Lions against Portugal in 1951. At that time, he scored one goal.
In his final days as a player, Nicholson attended the Football Association (FA) coaching course and briefly coached at Cambridge University. Nicholson then returned to the Spurs when he was appointed assistant manager by Jimmy Anderson, Arthur Rowe's replacement.
Three years later, Nicholson was entrusted with accompanying England manager Walter Winterbottom in the 1958 World Cup. His genius in analyzing the match succeeded in bringing the Three Lions to a 0–0 draw against defending champion Brazil.

In his autobiography Glory Glory

, Nicholson told how his story was when he was appointed manager to replace Jimmy Anderson.
In early October 1958, Tottenham vice-chairman offered him to replace Anderson. However, Wale did not discuss salary increases or offer a new contract. Nicholson himself didn't really think much about whether or not a new contract was available. The reason was that anyone would be fired if his performance was not satisfactory, even if there was a contract.
So, Nicholson immediately accepted the offer without discussing contract issues. Nicholson was quite confident in his experience over the past four years as an assistant manager. He also worked as a physical instructor at the Durham Light Infantry during World War II. He also felt that his experience was enough to hone his managerial skills.
His debut as the Spurs manager was quite impressive. In his first match as manager, he successfully led Tottenham to beat Everton with the score 10–4. The victory was somewhat special because Nicholson took command when the club's performance was poor. At that time, Tottenham was in 17th place out of 22 clubs that competed in the First Division of the English League in the 1958–59 season.
With all the existing limitations, Nicholson was able to save Tottenham from the abyss of relegation. Tottenham managed to finish in 18th place at the end. From a total of 12 matches that he played during the rest of the season, Nicholson was able to win nine games.
Besides being good at concocting tactics and analyzing opponents, Nicholson was also good at assessing the potential players needed by the club. Before the 1959–60 season rolled around, Nicholson recruited a number of players such as Les Allen, Bill Brown, Dave Mackay, and John White to fix the club's slumping performance.
Nicholson's new recruits helped Tottenham win 12 consecutive games at the start of the season. Nicholson paired Les Allen who was brought off from Chelsea with Bobby Smith on the front lines. Both of them then transformed into frightening figures for the opposing team's defense. Allen scored 23 goals, while Bobby managed to record 33 goals. At the end of the season, Tottenham successfully jumped to 3rd place in the First Division final standings.

Nicholson only needed a season and a half to build a solid squad. The 1960–61 season was a historic year for Nicholson because of the various records he set.
On paper, the manager who was born on January 26, 1919, had capable squad. He had sharp strikers like Bobby Smith and Les Allen, wingers Cliff Jones and Terry Dyson, to team captain Danny Blanchflower who was able to support push and run tactics.
With this squad, the Spurs managed to win the first 11 matches of the 1960–61 season. This incision marked the beginning of Tottenham Hotspur's golden age. The Spurs won the First Division title that season and at the same time became champions of the FA Cup. It became the first club to win double winners in the 20th century.
In the following season, despite failing to win the First Division, Nicholson managed to lead Tottenham to defend the FA Cup title. He also managed to recruit a player who was later lined up as the best striker in the history of Tottenham Hotspur, Jimmy Greaves.
Tottenham brought Greaves to White Hart Lane from AC Milan for a fee of £99,999 in December 1961. Greaves scored 266 goals in a total of 379 games in Tottenham's shirt. He was one of Nicholson's best recruits. In his autobiography, Nicholson admitted that he has been interested in using Greaves's services since he was still defending Chelsea.
Greaves's abilities were further honed under Nicholson's tutelage. Prior to the 1963 UEFA Winners Cup final, Greaves had listed his name on the scoreboard 42 times. Jimmy added two more goals as Tottenham beat Atlético Madrid 5–1 in the UEFA Winners Cup final. This victory made Tottenham the first English club to win a European level competition.
In the 1964 to 1966 seasons, Nicholson recruited several more talented players to strengthen Tottenham. Among them were Pat Jennings, Alan Gilzean, Cyril Knowles, Terry Venables, Alan Mullery, and Mike England. The increasingly complete squad made Tottenham even more unstoppable in the following seasons.
Nicholson's highest achievement while coaching Tottenham was in the 1971–72 season. He managed to lead Tottenham to win the UEFA Cup, making the Spurs the first English club to win two different European level competitions.
When Nicholson retired from coaching Tottenham on August 29, 1974, he had won eight titles in all major domestic and European competitions as well as three minor trophies. Tottenham Hotspur's golden years with Nicholson are remembered by their supporters as the Glory Glory Years.

Nicholson's dedication to Tottenham did not stop, even though he retired from coaching. After briefly advising West Ham United, Nicholson finally returned home in 1976 and was assigned to be chief scout.
As a talent guide, Nicholson brought in Gary Mabbutt from Bristol Rovers. Like Greaves, Mabbutt was also one of Nicholson's best recruits. During his Tottenham shirt, Mabbutt made 611 appearances in all competitions and was the team captain for 11 years.
Nicholson's love for football and Tottenham was rewarded with numerous individual awards. Among these, he won the Bell's Scotch Whiskey Manager of the Month in September 1970. The Professional Footballers' Association also awarded him the PFA Merit Award in 1984. In honor of his lifelong dedication to Tottenham, his name is immortilized as the name of the road to the White Hart Lane stadium.
After retiring from his position at the club in July 1997, Nicholson apparently never wanted to retire from the world of football. Until his death on October 23, 2004, Nicholson was always never far from White Hart Lane. Tottenham fans remember him as Mr. Tottenham, the most successful manager in club history who has dedicated his life to Tottenham.
Sports