Andrea Pirlo brings Juventus character and enthusiasm back to life 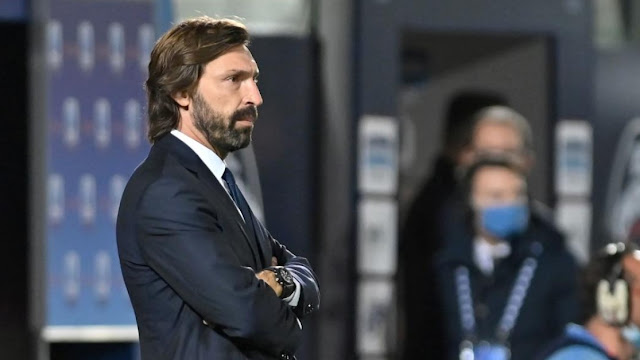 Juventus won a 2–0 victory over Dynamo Kyiv in its inaugural match in the Champions League this season on Tuesday, October 20. In that match, Juventus coach Andrea Pirlo met Mircea Lucescu, who gave him the opportunity to debut in Serie A. At that time, Pirlo was 16 years old.
In an exclusive interview with UEFA, Pirlo said he was lucky to have been coached by great managers, such as Marcello Lippi, Carlo Ancelotti, Antonio Conte, to Massimiliano Allegri. But, before those big names, the coach he praised the most was Lucescu.
Also in his biography, I Think Therefore I Play

, Pirlo told how important Lucescu's role was at the start of his football career. Pirlo was promoted to the Brescia senior team when he was only 15 years old. As young as that, Pirlo must face great pressure on the senior team. During training, Pirlo often got tough tackles from senior players who were twice his age.
That was because they thought Pirlo was stylish like a star player, especially with his ability and calmness to control the ball. In fact, Pirlo only played as instructed by Lucescu, still playing as he did when he was defending the junior team.
Lucescu believed in Pirlo, although many senior players were not happy with his existence.
In another training session, Pirlo made it past a senior player three times in a row. In the fourth time, the somewhat annoyed senior made a hard tackle by aiming at Pirlo's ankle. Seeing this, Lucescu actually asked Pirlo to keep playing in his own style.

Inspiration from Ancelotti and Conte

Now, as Juventus manager, Pirlo also took tactical inspiration from those who used to coach him. In the My Football thesis he wrote as a condition for obtaining a coaching license, Pirlo mentioned Carlo Ancelotti as his inspiration. Ancelotti coached him while playing for A.C. Milan for eight years.
Before joining A.C. Milan, Pirlo played in the attacking midfielder position, the number 10 player. Ancelotti then shifted his position to central midfielder with a playing area in front of the center-backs. According to Ancelotti, taking into account his intelligence and capable crossing and through-ball abilities, Pirlo was more of carrying out the task.
The move was an adaptation of Ancelotti to modern football tactics that no longer tackled the midfield position for physically powerful players. In modern football, midfielders must be able to play in several roles, such as building attacks, defending, pressing, to scoring goals.
During their eight years together, Pirlo and Ancelotti managed to win eight titles. Among them were the Serie A champions in the 2003–2004 season and two Champions League titles in the 2002–2003 and the 2006–2007 seasons.
From Ancelotti, Pirlo learned how to determine the players for the central midfield role for Juventus. In My Football, which scored 107 out of a maximum score of 110, Pirlo specifically mentioned three managers who had succeeded in modernizing the role of central midfield, namely Ancelotti, Pep Guardiola, and Zinedine Zidane.
Pirlo's success in maximizing midfield players was seen when Juventus faced Sampdoria in Serie A and Dynamo Kyiv in the Champions League. He managed to demonstrate how central midfielders played a role in ball possession and tactical flexibility. In these two matches, the Juventus midfielders looked stronger in possession than when coached by Maurizio Sarri in the previous season.
The I Bianconeri's squad managed to record a successful pass percentage of 90 percent in the match against Sampdoria and 85 percent against Lucescu's men.
Apart from Ancelotti, Antonio Conte's name was also mentioned in the My Football thesis. Pirlo was trained by Conte while defending Juventus. Since his first game as Juventus coach, Pirlo did what Conte always did: put three defenders in the defense.
The Juventus center-backs were not only in charge of grabbing the ball from opposing players, but also helping the attack. In the build-up phase, for example, center-backs could feed the ball directly to the front lines. Fortunately, Pirlo had center-backs like Bonucci and Chiellini who were fluent in providing penetrating passes, even though both of them were no longer young.
At the end of last season's Serie A, Pirlo praised Conte's Inter Milan squad. He was amazed at the way Conte led Inter to close the gap with Juventus. Conte's obsession with winning every game was the inspiration. He also appreciated Conte as his best coach.
Pirlo stated in his thesis that he wanted attacking football like Conte. When he started managing Juventus, Pirlo also expressed his desire to revive the characteristics of the game that was carried out during Conte's training.
The match against Sampdoria could again be an example of how Pirlo proved what he said. Juventus immediately applied a counter-press every time an opposing player stole their ball. In several other matches, Ramsey, who was plotted as the number 10 player, played an important role in this tactic.

A fresh breeze in the locker room

At the beginning of his appointment as the manager of the Old Lady, many people doubted Pirlo. His minimal experience as a manager was the main reason for that doubt. Despite winning his first match in the Champions League, criticism against him continued to come because Juventus could only win two wins from five matches in Serie A.
However, it was undeniable that Pirlo's arrival brought fresh air for all players considering the condition of the Juve dressing room under Maurizio Sarri was quite problematic.
Marcello Lippi, the coach who brought Italy to world champion in 2006 with Pirlo, believed his former protege would succeed in coaching Juventus. Lippi compared Pirlo with Zidane who also did not change much while coaching Real Madrid. Even so, the players felt comfortable being coached by one of the club legends.
Pirlo's closeness with senior players, such as Bonucci, Chiellini, and Buffon, made it easy for him to build good communication with the whole team. Bonucci said that Pirlo's figure resembled the authoritative Allegri. Bonucci believed Pirlo would bring changes to the team.
Bonucci was quite satisfied with Pirlo's new tactics in defense. If Sarri moved his defensive line-up as a group, Pirlo gave each defender the freedom to move. They were more often involved in one-on-one duels and were more aggressive in seizing the ball.
The midfielders also played with the same aggressiveness. Fortunately, Pirlo had a line of midfielders who were also good at passing the ball so they could maximize ball possession. These two approaches to the game set him apart from Sarri's last season.
Even so, Bonucci admitted it was too early to say whether or not Pirlo's tactical choice was true. But, what was clear was that things were going better now and the players believed in Pirlo.
On paper, Pirlo had the experience of being coached by a line of top managers who influenced his thinking and thesis. So, it was worth looking forward to how far Pirlo was able to bring Juventus at the end of the season.
Sports