How did Boudica destroy the Roman army? 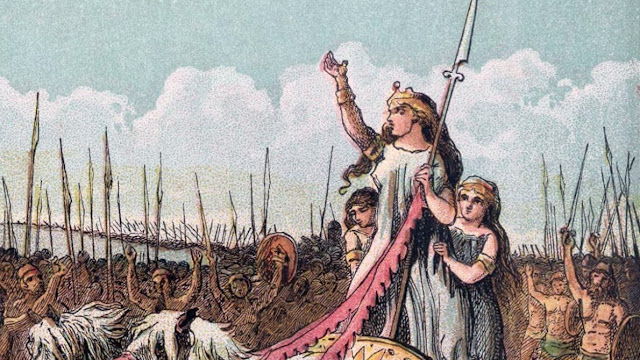 In conflicts and wars, women were often positioned as victims. Hillary Clinton said at a conference on domestic violence in 1998 that women had always been the primary victim of war. In many cases of armed violence, women were victims of rape.

Besides that, war is always associated with men. War is considered a masculine activity. Military service, which is only required for men, is one proof of this assumption. But history says differently. There are many women on the battlefield.

Indonesia, for example, had Cut Nyak Dhien, Martha Christina Tiahahu, Cut Nyak Meutia, Keumalahayati, and so on. Today, female combatants in the armed forces of the Kurdistan Workers' Party (PKK) provide another example.

The female soldiers have the same duties as men. They are at the forefront of being the leader of the reconnaissance squad and in various other roles. Kurdish women first took up arms in the 1990s as members of the PKK.

There is also Peshmerga with a battalion of Kurdish women. These female soldiers had a big contribution during the Rojava conflict in 2012. Apart from fighting the Turks, the female soldiers also fought on the front lines against the Islamic State of Iraq and the Levant, which believed that they would immediately go to hell if they died at the hands of women.

The story of women on the battlefield has actually appeared since the era of the Roman Empire. Boudica is one of them. The Queen of the Iceni was known as a freedom fighter who fought against the Roman Empire.

Boudica is one of the British most iconic queens. There are two sources that can be cited, namely the accounts of two Roman historians: Tacitus in Agricola

, and Cassius Dio in Roman History

The Romans considered a society that allowed women to fight as a group of people who were immoral and uncivilized. This attitude then helped rationalize their conquest of other nations. In the Roman Empire, the legal order of the family and society restricted women's participation in public life based on the traditional morality that exalted men.

Not surprisingly, when women who were considered weak appeared on the battlefield, they would be considered anomalies. Cassius Dio described Boudica as a striking and terrifying-looking woman, tall with a sharp gaze, a deep voice, and waist-length red hair.

Boudica had two daughters with her husband named Prasutagus, a client king who was under the control of Nero. Rome invaded England in 43 AD but eventually allowed the Iceni people to keep their land even though the tribe had to pay taxes to it.

According to Tacitus's notes, the problems started when Prasutagus died. He only inherited part of his wealth. Meanwhile, some of the others passed on to their two daughters. His territory at that time included Norfolk and Sussex.


As a result, the Romans plundered their palaces. Boudica was flogged, and her two daughters were raped by the Roman slaves. The Iceni chiefs were treated like slaves. These events fueled her anger and resentment, and the Icenians' as well.

Boudica planned revenge on the Roman Empire. In her mission, she was assisted, among other things, by the Trinovantes, the first inhabitants of England who agreed to a treaty with the Roman Empire.

The Iceni, Trinovantes, Cornovii, Durotriges, and various other British tribes then prepared an army to attack the Roman Empire and chose Boudica as a leader. Referring to Tacitus's records, Boudica and her army of 100 thousand people attacked the Roman soldiers who were off guard. At that time, most of the Roman troops were fighting the druids in Mona, Anglesey, along with Gaius Suetonius Paulinus, the governor of Britain.

Boudica's first target was Comulodunum, now Colchester. Her troops were succeeded in leveling Camulodunum. Those who couldn't escape were burned alive along with the rest of Camulodunum. The Romans who were prisoners of war were tortured by her troops.

After Camulodunum, Boudica and her troops attacked Londinium, now London, a trading center situated on the banks of the River Thames with little defense. As many as 30 thousand people who were in Londinium fled from the city. Londinium was burned and controlled by her troops.

The two largest cities of Rome in England had been burned. But Boudica and her troops were still not satisfied. This time, Catuvellauni was the target. Although it didn't belong to Rome, Catuvellauni greatly exalted it, and it could be seen from how they glorified everything that was Roman in style. For her, this was an insult.

Boudica and her rebel forces mobilized the surrounding men towards the third target of Verulamium in the southwest of the modern city of St Albans in Hertfordshire. Verulamium was the largest Roman settlement in Catuvellauni state with municipium status. It was a special status for local magistrates as Roman citizens and had the right to live on par.

Again, the whole city of Verulamium was turned to ashes by Boudica and her troops.

According to Cornelius Tacitus in The Annals, no less than 70 thousand Romans died in Boudica's rebellion.

Gaius Suetonius Paulinus who had just returned from Mona found that his territory had become ashes. He lost thousands of troops, and that would clearly weaken the strength of Rome in England. But what was most embarrassing to the Roman Empire was that they were conquered by a female leader. They thought it was an insult.

Paulinus met Boudica near Fenny Stratford. But the meeting didn't lead to a peaceful path, and a major war was inevitable.

wrote that the Roman governor of the island Paulinus only had about 10 thousand male troops in total to fight with Boudica's army, which, according to Cassius Dio, numbered up to 230 thousand men.

The very large number of rebel troops resulted in a shortage of weapons. In Boudica's fast-paced rebellion, there was neither time to manufacture large numbers of weapons nor opportunity for the rebel forces to plunder the Roman arsenal, Mattingly noted.

Paulinus took advantage of the mistakes of Boudica's tactics and her troops. Paulinus chose a place surrounded by forest with a narrow entrance. That way, he wouldn't be afraid of an ambush, Tacitus said in The Annals.

Boudica made a tactical error by placing supply wagons near the front line so as to block her troops when they had to retreat. Cassius Dio said the British were indeed experts in guerilla tactics, but the Romans were very organized killing machines.

Rome won hands down. According to Tacitus, Paulinus lost 400 troops while Boudica 80 thousand. The battle turned into a cruel massacre by the Roman troops.

Facing that defeat, Tacitus said Boudica committed suicide with poison. Meanwhile, Cassius Dio said Boudica fell ill and died. Her two daughters disappeared from the records as their tribe faced genocidal attacks. The land and roundhouses of Trinovantes and Iceni were also destroyed.

Apart from her defeat on the battlefield, Boudica had a big impact and change for the British people. The Roman Empire appointed cavalry to serve as overseers in each province. They were responsible to the Emperor in terms of collecting taxes and managing the country's wealth such as the supply of grain and mining.

The formation of the supervisors was initiated because of the heavy amount of tax imposed by the Roman procurator on the Iceni tribe, which ultimately sparked Boudica's rebellion. The Roman Empire reduced several tough demands on Britain, including imposing a fairer tax system for the British people.

Boudica's image as the queen of England who fought against her enemies continued to survive. She became a symbol of British freedom and the power of women. This image was used by Elizabeth I in the 16th century as a justification for fighting against the Spanish Empire. The same image was used by Queen Victoria in the 19th century in an attempt to expand her empire.

, Steve Roud wrote, in 1902, not long after Queen Victoria's death, who was the longest-running queen in British history, Boudica's statue stood on Westminster Bridge.