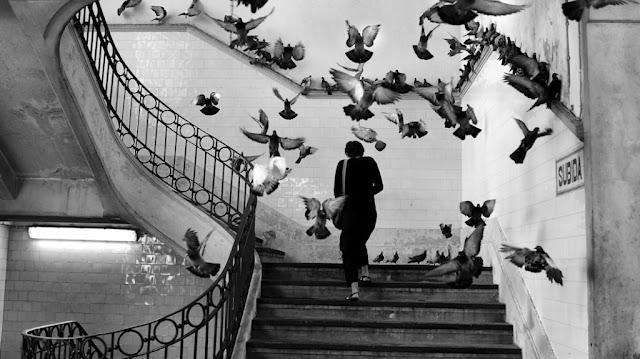 "Sharpness is a bourgeois concept." Henri Cartier-Bresson gave the sentence to Helmut Newton, a fashion photographer, who was technically at odds with a concept he introduced, which was then synonymous with his name: decisive moment.
The opening sentence reads so fiercely that you know he was saying it as a joke because his old hands were trembling easily, and many of his pictures were blurred. Shortly after his meeting with Newton, on August 3, 2004, today 16 years ago, Cartier-Bresson died at the age of 95.
Let's discuss the joke. Sharpness is a bourgeois concept is a type of joke that could only emerge from people who understand photography as an art, who prioritize stories rather than technical matters, such as sharpness, and is aware of bourgeois existence.
To understand the latter, we need to go back to 1930s France.
If you do quick research through a search engine, there are lots of writings on decisive moments, from tips to find them, how to become a Cartier-Bresson, motivational photography quotes, mythical myths, to his achievements.
What is not much discussed is the origin of the energy that overflowed in Cartier-Bresson to proclaim human problems to the world through photography, which he then simplified it into the phrase decisive moment.
To arrive at that answer, you need to explore further not only technical photography matters but also the political roots and the situation of the people when the street photojournalists began to establish themselves.
In the 1930s, as reported on JSTOR, France experienced chaos in various lines from socio-political to economic. Unemployment and inflation increased. The chaos had a political impact on both fascists and communists.
In 1934, right-wing riots broke out in Paris. Julian T. Jackson in The Popular Front in France

noted that people were starting to worry about the right-wing movement and were afraid that in the future, France would fall into the pit of fascism.
At the same time, Cartier-Bresson graduated from high school in 1927 and worked for a year at André Lhote's studio, a Cubist painter and sculptor. At one point, Cartier-Bresson felt uncomfortable with the rules that Lhote used in his approach to art, even though later, his rigorous theoretical helped Cartier-Bresson a lot in the composition of photographs.
In this period, Cartier-Bresson actually received the most significant influence from André Breton, a surrealist poet and editor. He was a member of the French Communist Party and was very much inspired by the October Revolution.
His artistic vision, which relied on socialist principles and the belief that art must oppose all forms of bourgeois authority, had a profound impact on Cartier-Bresson and his teenage friends. He admitted that his attention was taken up not by surrealist paintings but Breton's very satisfying portrayal of the role of spontaneous expression and intuition and, above all, the attitude to rebel in art and life.
Cartier-Bresson's experience as a photographer grew in a space where the crisis of fascism was on the rise and extreme changes needed to be made. These things fostered a kind of belief that human progress could only be achieved when old cultural values and political institutions disappeared.
As a communist sympathizer, when he visited Mexico and the United States in the early 1930s, Cartier-Bresson corresponded a lot with these groups. In New York, he spent a lot of time with the Harlem Renaissance, the most influential African American cultural movement.
Nicolas Nabokov, a close friend, said they had a long chat in Harlem mostly about morals and politics. But for Cartier-Bresson, the communist movement was a bearer of history toward the future of humankind, especially in those years when Adolf Hitler was riding in Germany, and a civil war would explode in Spain.
At the end of 1935, Cartier-Bresson returned to France. He became the assistant director of Jean Renoir's film and approached the PCF. Ahead of the 1936 general election, he produced Life Belongs to Us, the PCF campaign film.
Subsequently, Cartier-Bresson worked on Victoire de la vie, a film about the Spanish Civil War, was involved in The Rules of the Game

, and became an assistant director in A Day in the Country

. In addition, he also worked as a PCF newspaper photographer.
Life experience in a crisis situation and closeness to the PCF then made him have a different style from contemporary photographers. His political tendencies clearly gave a touch in his photo works. When Jacques Henri Lartigue chose to keep taking pictures of racing cars and models in Paris, Cartier-Bresson chose the streets.
From the story above, the efforts of the photographers to imitate him may be in vain because what he called a decisive moment is only the tip of the iceberg.
In 1947, Cartier-Bresson, along with Robert Capa, David Seymour, George Rodger, and William Vandivert, founded Magnum Photos, an independent photography agency that allowed photographers to photograph what they liked without the intervention of business or magazine censorship, which quickly became the standard photojournalism.
Cartier-Bresson set his sights on the great changes taking place in Asia. On many occasions, he always claimed his first wife Ratna Mohini sparked his interest in the Asian struggle to free itself from the shackles of invaders.
Cartier-Bresson, along with his friends, wandered and showed the world what D-Day was like, French Liberation, Chinese Communist Revolution, Indonesian Independence, to daily activities, such as picnics by the river or photo of a boy carrying a bottle.
Cartier-Bresson not only photographed major events but also celebrated the small ones with his camera, framing the trivial things in a photo composition equivalent to a country's independence celebration. At the same time, photographs that recorded trivial events also illustrated the surrounding social situation.
In 1954, Cartier-Bresson became the first western photographer to be permitted to enter and photograph the Soviet Union after World War II. He won the trust because of his reputation on the left. In addition, the main focus of his photography was ordinary people, workers, and other proletarians who fitted in with socialist realism, an artistic movement that was officially supported in eastern Europe at the time.
During his Soviet voyages, Cartier-Bresson took many ordinary activities: workers dancing at parties they made themselves, military officers with their families, and people taking leisurely walk on a sunny day in Red Square.
These photos were published in Paris Match and gave another news that workers' countries really existed, and they lived an ordinary life. His photographs wove a thread that connected one human to another and showed Soviet workers living happily.
His photographic approach is mostly used by modern photographers, and his sentences are the most frequently cited. Sometimes the quotations do feel poetic and, more importantly, as if they were easy to do, for example, "For me, the camera is a sketchbook, an instrument of intuition and spontaneity, the master of the instant, which, in visual terms, questions and decides simultaneously."
The sentence appeared because it was accompanied by advances in camera technology at the time. The Leica M3, a 35 mm rangefinder camera that he used, was light in weight and made his movements on the streets not make anyone suspicious. And the super-fast black-and-white film allowed him to shoot without drawing attention. Imagine if he was walking around carrying a medium camera, it would immediately intimidate anyone who saw him on the road.
His photo approach was almost always the same throughout his career. Cartier-Bresson never used a zoom lens, disliked artificial light and print manipulation in dark spaces, and even tried to avoid cropping.
Cartier-Bresson was like a naturalist when taking pictures, making sure all the elements he needed were available right when the picture was taken, in line with his decisive moment concept. The lens he used was only a 50 mm, sometimes using a 90 mm when he wanted to get details.
Cartier-Bresson avoided the use of flash because, according to him, it bothered people and was disrespectful. When printing photos, he printed them as is. He tended to avoid complicated things in photography because for him, what did interesting actually happen when the process of shooting took place. He used photography as a means of expression and self-liberation.
During his active time as a photographer, Cartier-Bresson watched the world from various sides: fragility, stability and instability, the transition of power, war and the best years after it ended. He managed to give life to every creature that passed in front of his lens, summarize many events in rolls of film, and play a role in giving synthetic memories that people, like you and I, had never actually experienced because we didn't live in the age when the pictures were taken, but we could remember them, in unseen ways, when looking at the photos.
Photographers always deal with loss. And when that moment disappears, he said, there is no sophisticated tool capable of making it back again.
Humanities