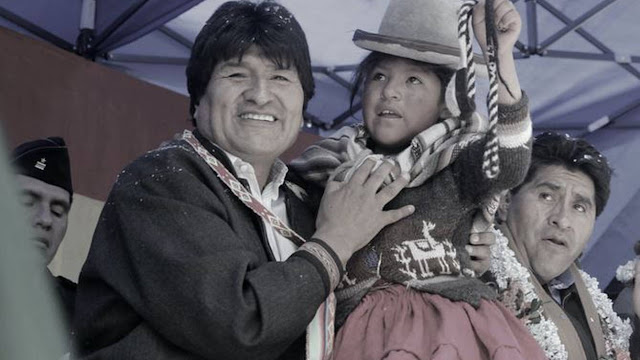 "Another government stimulus package is not in the best interests of the people imo," tweeted Elon Musk, commenting on the policies in dealing with the economic impact of COVID-19.

Musk, one of the people who became very rich after selling PayPal to eBay, later he and these new riches were nicknamed the PayPal Mafia, and then led Testa, Inc. and SpaceX, was protested by one of his followers on Twitter.

"You know what wasn't in the best interest of people?" asked Musk's follower @historyofarmani, "The U.S. government organizing a coup against Evo Morales in Bolivia so you could obtain the lithium there."

After @historyofarmani responded to his tweet, Musk said that they would coup whoever they wanted.

The alleged coup against Morales related to the natural resources of lithium in Bolivia did sound widespread after November 2019. However, outside the debate surrounding his ouster, it is difficult to take Musk's statement seriously, considering his behavior as a troll on the internet. A week after the tweet about the stimulus package was published, he, of course, via his Twitter account, stated that the pyramids were made by aliens.

The fact that Musk is a troll on the internet is one thing. However, the abundance of lithium in Bolivia is another fact that cannot be ignored.

On November 12, 1999, through the hands of the Ministry of Irrigation and Agriculture, an agricultural organization named La Coordinadora was born in Cochabamba, Bolivia. Raquel Gutiérrrez in a book entitled Rhythms of the Pachakuti

said that this organization was run by a regantes group, AKA farmers who had irrigation rights.

La Coordinadora, which was the absolute controller of water in Cochabamba, had an exclusive partnership with Aguas del Tunari, a subsidiary of Bechtel. Furthermore, La Coordinadora forced the government to pass Law 2029 on water and irrigation.

This rule allowed La Coordinadora to be the only entity in Cochabamba and then later throughout Bolivia that controlled water, stripping local governments of their powers. In its journey, La Coordinora wanted water sources and irrigation infrastructure in Cochabamba to be run not only by local residents but also by bringing in people from various backgrounds.


The problem was, the people who joined La Coordinadora had different views on Law 2029. Some of the united groups worried that, referring to Law 2029, the water, which is the necessity of life, was distributed unevenly.

Because La Coordinadora cooperated with many different groups, suspicions arose that this institution paid more attention to certain interests. What was more worrying about the law was that the government appeared to be opening the way for the private sector to control water, handing over basic human resources to La Coordinadora or, to be precise, to Aguas del Tunari.

It wasn't a year after La Coordinadora was established that the peasants of Cochabamba took to the streets on April 9, 2000. They unilaterally took over the water and irrigation infrastructure there and demanded the government end privatization, an authority given to Aguas del Tunari through the hands of La Coordinadora.

One of the farmers who took to the streets was Evo Morales, an Aymara, part of the local indigenous community, and leader of a coca farmer union in Bolivia. He, still referring to Gutiérrez's work, didn't only take to the streets in 2000. Previously, on August 21, 1998, he also took to the streets to oppose the government's decision regarding water control.

Although in Bolivia, coca was still legal, even labeled as a natural heritage of Bolivia, the protests were considered by the ruling government, and received US support at that time, as an effort to maintain the special status of coca in Bolivia.

Thus the action was deemed to have opposed the war on drugs campaign that was deployed by Washington and local governments in Latin America. In that war, coca was also targeted. Since 1961, a United Nations convention had declared coca an illegal substance.

Morales was elected as a member of parliament after the protest. Some time later, despite his previous failures, he was elected the President of Bolivia in December 2005. He succeeded in coming to power because of the disappointment of the Bolivian masses of the previous neoliberal governments.

Morales was considered to be able to make changes in the country. He would prioritize the nationalization of strategic areas of the economy with a special focus on natural resources. For him, everything that grew and was born in the land of Bolivia was a treasure that must be guarded not by Aguas del Tunari or the US but by its people themselves.

Maintaining coca was one of Morales's focus. The coca leaf is a symbol of the most violent cultural war in Bolivian history. Coca in Bolivian culture is considered a powerful substance that can treat various diseases, such as fatigue and fever, and improve oxygen flow to the brain.

In religious rituals carried out in the Andes mountains, the people there often bring coca as offerings. Before the United Nations classified it as an illegal substance, coca was also an important raw material in the pharmaceutical world, for example, for anesthetic drugs for medical purposes, cough medicine, wine, and chewing gum. Not to forget that Coca in Coca-Cola actually refers to coca, one of the main raw materials for the most famous drink in the world before Coca-Cola eliminated it after it was declared illegal.

After the US declared war on drugs in 1989, coca was hunted for its destruction. Instead of stopping or minimizing the demand side, the US prefers to destroy narcotics raw materials from the supply side.


The US, supported by the pro-Washington Bolivian government at that time, launched a military operation to enter tropical forests to eradicate coca, including in Chapare, the largest supplier region. The problem is, due to cultural factors and then the demand for modern pharmacy, coca is the livelihood of the people there.

Very many Bolivians make their livings as coca farmers. In 1983, for example, a mining company owned by the Bolivian government went bankrupt. More than 20 thousand people finally chose to survive as coca farmers. In fact, from 1980 to 1997, coca contributed 500 million dollars per year to state revenue. The move to destroy coca on the supply side isn't a war against narcotraffickers but against the surviving people.

Yes, coca is the raw material for cocaine. But in the minds of many people in Bolivia, there is a huge difference between coca leaf and its derivative products such as cocaine. So the Bolivian government's war at that time, which was pro-Washington, was widely seen as against the people. For many Bolivians, coca ended up becoming a symbol against the occupation.

Of course, because coca had been legally declared as illegal by the United Nations, the government under Morales's control couldn't protect it. So he turned to lithium, the fuel that makes the cars made by Tesla, which Elon Musk founded, run.

Lithium was like salt in salads, Musk said one time. Lithium, the chemical element with the symbol Li and atomic number 3, was first discovered by Johan August Arfwedson in 1817. He discovered lithium after researching a mineral called petalite, which José Bonifácio de Andrada discovered in 1800 on the island of Utö, Sweden.

Initially, the element wasn't named by the discoverer. It was Jöns Jacob Berzelius, Arfwedson's teacher, who then sent a letter to a French chemist named Claude Louis Berthollet on his student's findings. In his reply, Berthollet named the element lithion.

Etymologically, lithium comes from the Greek word lithos, which means stone. Berthollet named the new element lithium as a sign that it was a member of the mineral kingdom while the other two that were identical to it, namely sodium and potassium, came from vegetables.

Lithium, to take Musk's term, is indeed the salt for all mobile electronic devices. Lithium is the key raw material for the battery power source for mobile devices. As the consumption of mobile devices increases, such as cellphones and, of course, electric cars, the USGS estimates that the lithium business will be worth up to 750 billion dollars by 2030.

Apart from being rich in coca, Bolivia is also rich in lithium, as Simon Romero stated in his report for The New York Times. Quoting USGS data, 5.4 million tons of lithium can be mined from the soil of Bolivia. This number is far superior to other countries with lithium, such as Chile with three million tons, China 1,1 million, and US 410 thousand.

During his time in power, Morales was reluctant to cooperate with any country regarding lithium even though Japan and France had openly approached him. He wanted lithium to be controlled by Bolivian society. They understood very well that Bolivia could be the Saudi Arabia of lithium. Yes, they are poor but not stupid. Lithium is their property.

At the end of 2019, Morales then had to step down after demonstrations and an army-assisted opposition coup. He was accused of fraud in the election. Last July, the accusation was encountered by the joint research of three researchers from the University of Pennsylvania and Tulane University.

Bolivia's Interim President Jeanine Áñez was now trying to stop Morales's party, the Movement for Socialism, from contesting elections and to delay voting. France 24 reported on a poll last March that showed him as a politician from Bolivia with a high degree of popularity.

This was clearly a national and international coup, Morales stressed to Aljazeera.com last December. They, of course, want to cope with lithium. They know that the location of the world's largest lithium reserves covering 16,000 square kilometers is in Bolivia.