To be free of oil, United Arab Emirates went to Mars 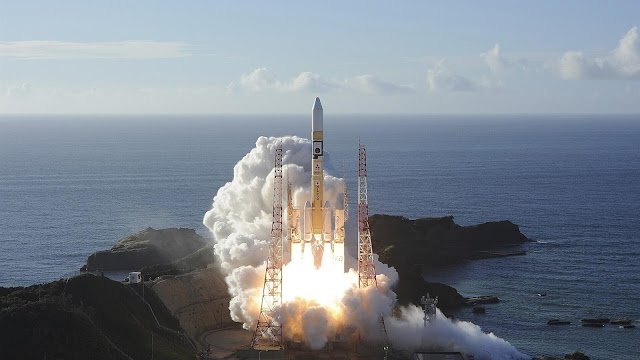 Hazza Al Mansouri was about to fly to the sky by riding Russian spacecraft Soyuz MS-15 toward the International Space Station (ISS). He was accompanied by Jessica Meir from NASA and Oleg Skripochka from Russia.

At exactly 15:42 Eastern Time, Al Mansouri finally arrived at the most expensive station ever made by humans located in low Earth orbit, two thousand kilometers above. He legitimately became the third successful Arab to tread space after Sultan bin Salman Al Saud from Saudi Arabia did it in 1985 when riding a NASA shuttle mission and Muhammed Faris, a Syrian fighter pilot who went to the Soviet Mir space station in 1987.

But in the world of space, the Emirates wasn't like the United States or Russia. Al Mansouri's participation in the ISS was only seen as a demonstration of the strength of the possessions of the Emirati sultans.

NASA didn't even consider Al Mansouri an astronaut but a spaceflight participant, AKA a tourist. In 2001, with a cost of only 20 million dollars, businessman Dennis Tito did what Al Mansouri did, nothing special.

The Emirates was indeed not the United States or Russia, but clearly, the sultans there were far more powerful than Tito. Less than a year after Al Mansouri stepped up the ISS, the Emirates made a breakthrough, launching its own mission, Hope, to Mars on July 19.


Hope, the triumph of the Emirates's space glory

When America successfully set foot on the moon through the Apollo 11 mission in 1969, the United Arab Emirates was still a British colony in the shade of the Trucial States or known as As-Sāḥil al-Muhādin, AKA the Trucial Coast.

The United Arab Emirates became independent in 1972 when NASA launched the Apollo 17, the space agency's last mission to the moon. The Emirates was far behind the United States in space because of this slow start.

But in December 2017, when NASA was 59 years old, the Emirates wanted to end the lag. UAE ruler Sheikh Mohammed bin Rashid Al Maktoum, through his official twitter account, stated that the Emirates would start its space mission, and the citizens were asked to break down all obstacles.


In addition to successfully entering Al Mansouri into the ISS through Soyuz, until 2019, the Emirates had launched three Earth observation satellites in collaboration with South Korea. In 2020, in the midst of a pandemic, that success was followed by the launch of the Emirates Mars Mission.

However, Omran Sharaf, the project manager of Hope, stressed that the Emirates government cautioned that the space program launched by the country must be done alone, not buy. Of course, because of the backwardness of the Emirates from powerful countries in space, such as the US and Russia, it didn't want to start its space mission from zero.

The Emirates Mars Mission itself was assisted by Japan and the US. Japan helped the Emirates by providing a rocket to Mars, Mitsubishi H-IIA. While the US, through the Laboratory for Atmospheric and Space Physics at the University of Colorado, helped the Emirates to create Hope which cost 200 million dollars.

Together with scientists and technicians from the University of Colorado, around 100 Emirati smart people, who were in their mid-30s, worked. Hope wasn't a careless spacecraft. It was equipped with infrared and ultraviolet spectrometers and a high-resolution camera to capture data about Mars.

Hope would arrive on Mars in February next year and be configured to hover 200 to 43,500 kilometers above its surface. When Hope arrived on Mars, the spacecraft would meet its friends: three from NASA, two from the European Space Agency and one from India.


Mars was the life expectancy of humanity

The dream of humans setting foot on the land of Mars had been declared by mankind in the early 1960s into a follow-up mission after going to the moon. Of course, Mars was different from the moon that without even having to go there, humans could see it easily.

When the desire to walk on Mars began to emerge, people thought about how to get there. More than 30 years since planning to Mars, space scientists generally examined the best way to go there. For example, if you used a rocket powered by chemical liquids or even nuclear, humans could reach Mars in 1–1.5 years. But if you used a solar-powered rocket, it could take up to three years to reach Mars.


The launch time, which was closely related to the position of Mars in the solar system, was also influential. According to calculations, assuming humans or spacecraft stayed on Mars for 60 days, November every year was the best time to start the journey because, in that month, it was relatively closer to the Earth.

In its history, the Mariner 4 spacecraft from NASA was the first to greet Mars. Mariner 4 flew from Earth in 1964 and arrived on Mars in 1965. This spacecraft didn't land on the surface of Mars, but it successfully photographed it up close for the first time. Only in 1971 did the Soviet Union succeed in touching down.

In The Future of Humanity

, Michio Kaku said that the future of humanity wasn't on Earth. The reason was, if you looked at the evolution that occurred on Earth, Kaku wrote, 99.9 percent of life forms became extinct.

The Earth had its own laws to destroy its inhabitants, for example through a disaster. Right now, the Earth was facing global warming with nuclear problems and biological diseases, such as COVID-19. Humans had only two choices: adapt or die, Kaku stressed.

The adaptation in question was to start looking for a new home for humanity. Mars was one of the answers. Of course, what Kaku said wasn't the main motivation of the United Arab Emirates to launch a mission to Mars.

Elizabeth Gibney, in her presentation on Scientific American, said that the Emirates was facing various problems, one of which was the reduction in oil reserves which had been a source of wealth for the sultans.

In addition, most young Emirati boys and girls were now receiving technical and business education. Only less than five percent of youth studied basic sciences. To become a country free from oil dependency, the Emirates needed to spur young people to learn basic sciences that could later be implemented in many fields.

The mission to Mars, according to Emirati authorities, would be able to inspire young people.