Is it true that Hagia Sophia was sold to Mehmed the Conqueror? 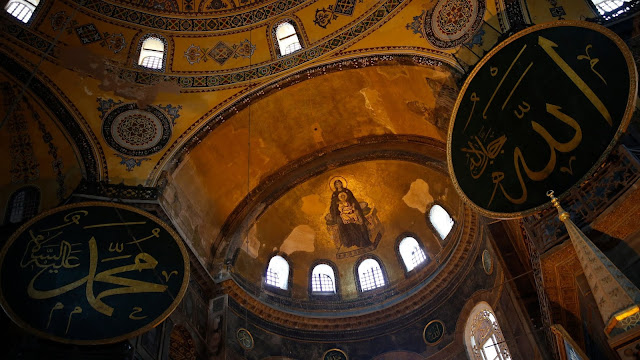 Hagia Sophia, a historic building and one of the World Heritage Site, which was once a church, mosque, and museum, will be re-functioned as a mosque after a court decision in Turkey revoked the decision of its First President Mustafa Kemal Atatürk in 1934.

A lot of information is milling about the changes in the status of the Hagia Sophia museum conducted by President Recep Tayyip Erdoğan. Bishop of Rome Pope Francis, for example, expressed his disappointment.

On the other hand, there are also a number of parties who support the decision because they indeed hope that Hagia Sophia will again be designated as a place of worship for Muslims. Some commented on the origin of the world's important building.

Regarding the information about its origin, one claims Christians had sold Hagia Sophia to Mehmed II.


Hagia Sophia, which is called Ayasofya in Turkish, is a silent witness to the history of the regime's transition that ruled Constantinople from paganism, Orthodox Catholicism, to the Islamic empire.

According to Encyclopædia Britannica Online, this building was first erected by Roman Emperor Constantine the Great in 325 AD on the foundation or site of a pagan temple. This church was the place where the rulers were crowned and became the largest cathedral operating during the Byzantine Empire.

This church was repaired several times during the riots in 404 AD caused by the feud between Emperor Arcadius's wife Eudoxia and the Patriarch of Constantinople John Chrysostom who was exiled. Emperor Theodosius II in 415 then rebuilt a basilica church in the same place.

The second damage occurred in 532 AD when the Nika riots took place. The riots occurred in the fifth year Justinian I assumed the position of emperor. This riot then caused the church to experience destruction. After the incident, Justinian ordered famous architects at the time, Isidore and Anthemius, to rebuild the church.

In 1453, the Byzantine Empire ended when it was conquered by Sultan Mehmed II of the Ottoman Empire. Under Mehmed's leadership, Hagia Sophia was converted from a church into a mosque. As noted by Marc David Baer in a book titled Honored by the Glory of Islam

, several churches were converted into mosques under Sultan Mehmed II.

. Under the conquest of Sultan Mehmed II in 1453, Hagia Sophia was converted into a mosque. Likewise, Constantinople changed its name to Istanbul.

During Mehmed's leadership, Hagia Sophia was in very bad condition. However, the Hagia Sophia building was later strengthened and well protected during the Ottoman period. In the 16th and 17th centuries, a number of sections were added, including four towers outside the building used to make the prayer call, a large candle holder, mihrab, and pulpit.

, Mehmed II also formed a charitable foundation for anyone to develop Ayasofya. Since 1478, 2,360 shops, 1,360 houses, four caravanserais, 30 boza shops, and 23 sheep shops contributed their income to the foundation.

In 1739, it was discovered Sultan Mahmud I added madrasa, imaret or public kitchen, and library to Ayasofya. In 1740, the sultan's hut and new mihrab were added to the building.

In 2005, a group petitioned the Turkish State Council, the country's highest court, claiming the historic building belonged to a foundation founded by Sultan Mehmed II.

In July 2020, the Turkish State Council agreed with the petitioners and concluded the original deed under Mehmed II designated the building as a mosque, and the use outside of it was considered illegal. Following the decision, Turkish President Recep Tayyip Erdoğan immediately transferred the supervision of the building from the Turkish Ministry of Culture and Tourism to the Directorate of Religious Affairs.

For the record, there is a picture of the document with the words Tapu Senedi. In English, the literal meaning of these words is Title Deed or Land Register. The document shows ownership rights, mainly ownership of land or property. This document is not a purchase and sale agreement.

Our further search regarding the Tapu Senedi document found the name Ebulfetih Sultan Mehmet Vakfi as the owner of the property/land. A short note, the word vakfi means foundation.

Based on searches that have been carried out, we did not find any information or documents that showed evidence related to the sale of Hagia Sophia by Christians to Sultan Mehmed II.