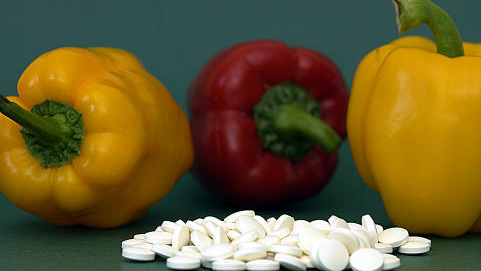 In the 1500s to 1800s, two million sailors died from scurvy, a disease caused by vitamin C deficiency. This disease can strike somebody if his/her vitamin C intake is below 10 mg per day for weeks, making the sufferer experience bleeding, especially in the gums, loose teeth, and anemia.

At that time, the sailors did not know what vitamin C was. They also did not have enough stock of fruit and vegetables during a long trip to the ocean. Then in 1747, a scientist named James Lind experimented and found that oranges and lemons could help treat people with scurvy. Since then, both of them became loyal friends of the sailors. At present, scurvy, once known as the plague of the seas, is rarely found even in developing countries.

Although they were aware of the importance of oranges and lemons, it still took a long time for scientists to find that the content in oranges and lemons was what really made the sailors avoid or recover from scurvy.

In 1928, Albert Szent-Györgyi, a scientist from the University of Szeged in Hungary, isolated a substance called hexuronic acid. Then in 1931, biochemist Charles Glen King discovered the presence of crystallized vitamin C in lemon juice which turned out to be in accordance with the properties of hexuronic acid.

These findings made vitamin C an interesting topic for deeper study, one of which was by Linus Pauling. He is the only person to have won two unshared Noble Prizes: the Nobel Prize in Chemistry in 1954 and the Nobel Peace Prize in 1962.


Pauling then published his most famous book, Vitamin C, the Common Cold, and the Flu

, in 1970. He encouraged people to consume 3,000 mg of vitamin C every day because it was thought to prevent flu and improve health.

Modern science refutes this finding. Three thousand milligrams is considered too excessive. A review of a study from the University of Helsinki in Finland in 2013 said that vitamin C could not prevent a person from influenza but could indeed shorten the duration of the disease.

The two researchers above, Harri Hemilä and Elizabeth Chalker, concluded that it only needed 1,000 to 2,000 mg of vitamin C per day to reduce the duration of flu in adults by eight percent, around 10 hours, and in children by 14 percent, 17.5 hours.

Vitamin C cannot be stored in the body. The body also cannot produce vitamin C. Therefore, one must consume vitamin C every day. Meanwhile, the excess vitamin consumed daily will immediately be removed by the body through urine.

The National Institutes of Health actually only recommends each person to consume 75 to 90 mg of vitamin C every day. However, the optimal dose of vitamin C consumption is 500 mg per day, except for smokers, pregnant women, or sick people. For them, higher doses are given.


A cheap and practical way to consume vitamin C

Although the researchers have different conclusions, there is one benefit of vitamin C that they all agree on: its ability to increase immunity, aka maintaining endurance. Vitamin C helps encourage the production of white blood cells known as lymphocytes and phagocytes which help protect the body from infection, also helps white blood cells function more effectively while protecting them from harmful substances such as free radicals. Vitamin C is also an important part of the skin's defense system because of its antioxidant properties. These benefits can make wounds heal faster.

To maintain endurance, taking vitamin C is one way. However, the immune system is a system, not a single entity. To function optimally, balance and harmony are needed, so you can't just stop at vitamin C.

Vitamins are very useful, but it is very dangerous if the supplement is used as a sedative for the soul, like, "I have already taken vitamins," and then it's okay to eat a little mess or be absent from sports or working overtime.

So in addition to taking vitamin C, one must also have a healthy lifestyle so that the immune system is strong. Some things that should be done are exercising regularly, getting enough rest, eating nutritious food and drinks, and avoiding stress.