The Quraysh, when the Prophet Muhammad was born, was economically strong but politically weak 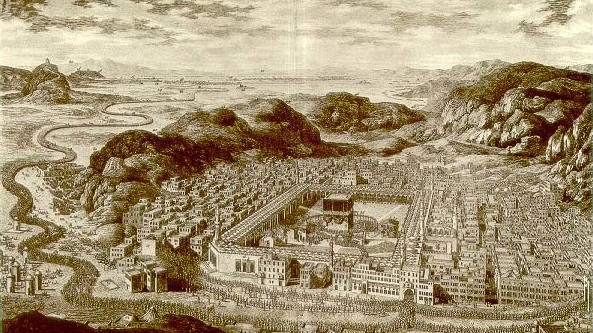 Muhammad was born from a clan commonly called the Banu Hashim. This name was attributed to a person named Hashim. In genealogy, Hashim was the great-grandfather of the Prophet Muhammad.

Pulled back to the branch of his family, Hashim was the son of Abd Manaf, someone who was highly respected in Mecca. Abd Manaf's father, Qusai, according to some traditional sources, came from a valley in Mecca that was closest to the place of worship, most likely the Kaaba.

Nearly all traditional Islamic sources from the Middle Ages agreed that Qusai was the one who united the Quraysh tribe which was divided after Fihr's death. Historian Francis Edward Peters in Muhammad and the Origins of Islam


Qusai later became a very respected man and gained a respected place among the Quraysh tribe. Moreover, he had quite a long traveling experience. According to some legends, Qusai had traveled to Syria and brought the idols al-Lat, al-Uzza, and Manat to Mecca. In that city, he made the god Hubal worship and put its statue in the Kaaba.


The Quraysh took over

As Karen Armstrong recounted in Muhammad

, the Quraysh then succeeded in taking over the Kaaba from the hands of the Banu Khuza'a who had served as guards of the Holy House for years and were deemed to have failed to carry out the mandate of their ancestors.

It is said that the Quraysh succeeded in driving out the Khuza'a through campaigns that combined deception and strength. Since then they had become stronger.

At the same time, trade flows in Mecca was also increasing. This city was not ideal for agricultural production but very strategic as a commercial district. The appeal of the Kaaba as a center of spiritual pilgrimage also contributed to advancing the city's economy. In Armstrong's words: The Kaaba created a very pleasant climate for trade.

The Quraysh tribe also managed to keep the city of Mecca stable. The Quraysh elites collaborated and established alliances with a number of Bedouin shepherds around Mecca. With this alliance, the safety of the merchants and pilgrims was guaranteed. At the very least, they could be free from the robberies or looting that was often carried out by Bedouin tribes in the Arabian Peninsula.

Armstrong continued that by embedding the smart and calculating nature of statesmanship, the Quraysh became the greatest power in Arabia during the 6th century.

But however strong they were, Mecca was still only a city and not a kingdom. Even politically, they were very fragmented. There was no very dominant clan, and each clan was fighting over influence and competing for wealth. While around it, there were three empires that could pounce at any time.

That made the Quraysh tribe very careful in taking political steps, especially after Abraha and his army almost invaded Mecca. So, in such situations, at the time of the birth of the Prophet Muhammad, the political desire of the Quraysh tribe was only one: maintaining Mecca's independence while continuing to accumulate coffers of wealth.