The ferocious Cultural Revolution was rooted in Mao's anti-criticism 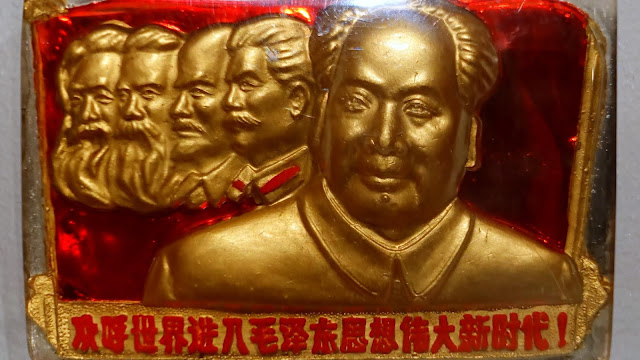 , which contained thoughts on Taoism. This fear, for Chinese communist father Mao Zedong, arose from oneself.

Chairman Mao, as people knew him, was the architect of the largest communist country in the world. During the fight for the founding of the People's Republic of China, he had isolated himself many times.

One of Mao's greatest efforts was to bring 100 thousand people to refugees along 10,000 km in 1934–1935. Some people gave up, but he was not afraid. Slowly but surely, he managed to avoid the Kuomintang troops led by Chiang Kai-shek.

Mao organized peasants, students, women, teachers, and workers to overthrow the power of the nobility and capitalists. At the 7th Congress in 1945, he stated, "We Communists never conceal our political views. Definitely and beyond all doubt, our future or maximum program was to carry China forward to socialism and communism."

The climax was October 1, 1949. After a prolonged civil war, Mao's ambitions were realized. He proclaimed the People's Republic of China and held the position of Chairman in 1954–1959. The next heavy task was to make the transition to socialism.

Before stepping down, Mao, who was also the Chairman of the Communist Party of China (CCP), spawned the results of his thoughts in a Great Leap Forward campaign as part of the transition to socialism. At this time, the stove at the back of the house was a common sight.

Mao deliberately emphasized production in the steel industry rather than agriculture. Farmers began massively shifting work to the backyard. Farmers did not have much choice. The CCP controlled the land and instructed farmers to grow food as projected.

Those who were not needed would be diverted to work in the steel industry. The distribution of food was carried out independently by the CCP. All food and industrial products were controlled and distributed by the state.

However, the program which was supposed to run for five years only lasted for three years until 1961. About 10 million people died from hunger, the death penalty, or even work fatigue. Many of them were also separated from their families because they were allocated to land or industries far from their homes. These catastrophic years were often seen as a sign of failure of Mao's ambition.

In addition, natural disasters also occurred in July 1958 when the Great Leap was set. A total of 1,708 villages were destroyed because of flooding, 300 thousand houses were destroyed, and 740,800 people were affected. The cause was the overflow of the Yellow River, the largest after 1933.

Two years earlier, relations between the Soviet Union and China were broken. This had happened since Nikita Khrushchev gave a speech before the 20th Congress of the Communist Party of the Soviet Union which condemned the practices of individual cults and dictatorships.

The Soviet Union under Joseph Stalin was an example for Mao. Khrushchev's actions that wanted the communist countries to coexist peacefully with the capitalist bloc countries finally brought the split between the Soviet Union and China. Mao worried that opposition in China would take the path of capitalism and destroy the socialist order that had been fought for.


In 1964, Khrushchev's turn was eliminated. A year after his fall, Mao was increasingly paranoid. The failure of the Great Leap Forward was the trigger. Some party leaders began to doubt his leadership. Among them were Deng Xiaoping and Liu Shaoqi. Deng and Liu were figures who were more accommodating of capitalism.

After the Great Leap failure, Mao resigned in 1959, and power moved to Liu. With Deng, Liu tried to restore the plummet of China's economy. He noted there was a deficit of two million yuans which had to be patched by China.

Mao still held power as the Chairman of the CCP but was not consulted in decision making in the government. Deng and Liu carried out massive reforms in the economic sector. One of the most different was the return of agricultural land to the community.

During the Great Leap, the land was managed collectively. In 1962, most of the agricultural land was already occupied by individuals because collective management failed miserably. In the industrial sector, Liu also employed supervisors at the managerial level, and a wage system was based on labor performance.

People were slowly forgetting about the failure of the Great Leap Forward system, but this raised other questions about the future of China. Mao who had stepped down from power saw Liu's and Deng's policy as Soviet-style revisionism.

Not only contrary to the revolutionary movement, Deng and Liu were also considered to ignore the problem of social class. Even though Mao had stepped down from the chair, he was still an individual in power.

Mao's campaign called Liu and Deng as bourgeois disguised as socialists. This was the beginning of Mao's discourse against his own government. On May 16, 1966, exactly today, 54 years ago, a notification from the CCP's Central Committee was distributed.

One point read, "The whole party must follow Comrade Mao Tse-tung's instructions, hold high the great banner of the proletarian Cultural Revolution, thoroughly expose the reactionary bourgeois stand of those so-called 'academic authorities' who oppose the party and socialism."

The notice became the beginning of the Cultural Revolution. Through this announcement, Mao did the most unique thing that had probably never been done by a single party leader anywhere: attacking his own party with the power of the wider community.

In The Cultural Revolution

, Frank Dikötter noted the first civilian victim in Mao's Cultural Revolution was a 33-year-old man who worked in a scissors-making factory in Yangzhou. The man named Chen Zhigao walked 50 km to the Purple Mountain and downed a bottle of cyanide.

Chen could not stand the various pressures of the Cultural Revolution after the door of his house was plastered with posters by young children. The poster read, "Catch Deng Tuo!" Deng Tuo was a People's Daily journalist targeted by the Red Guards.

After the loyalists control the media, people began to track down who Mao's political enemies were. Deng Tuo was the editor who held Mao's speech for publication in 1957. At that time, Deng Tuo did so with the leader of the Group of Five whom Mao had removed at the start of the Cultural Revolution. Now, Deng Tuo was the next target.


Previously, the Chinese government under Mao had encouraged freedom of criticism through the Hundred Flowers Campaign in 1956. However, a year later, he actually hunted down and imprisoned people who threw criticism with the Anti-Rightist Campaign. Fear of criticism became the root of the Cultural Revolution.

In 1961, a historian named Wu Han performed a play Hai Rui Dismissed from Office. The theater performance told the story of Hai Rui, a Ming Dynasty official who was removed from his post for criticizing his superiors.

Initially, Mao liked the play. After the play spread, some people interpreted the story of Hai Rui to be similar to Peng Dehuai, the Minister of National Defense whom Mao fired for expressing criticism during the Great Leap. The play Wu created was then prohibited from appearing again. Mao's patience ran out, and the Cultural Revolution erupted.

During the Cultural Revolution, schools and campuses did not move. Churches, temples, libraries, shops, and houses were looted and destroyed by the Red Guards. Troops in green jackets and red armbands were formed by students who became Mao's followers.

The Red Guards eliminated political opponents of the number one person in the CCP, not least in Mao's own party. The accusation was that the opposition intended to perpetuate capitalism. They were considered as intruders in the CCP.

The Red Guards were also supported by People's Daily. In the June 3, 1966, issue, the newspaper urged the Red Guards to eradicate bad habits in society by attacking monsters and demons, aka anyone who disagreed with them. Civilians who were victims included teachers and intellectuals. They were beaten and humiliated in public. Some of them were even encouraged to commit suicide.

Students were also equipped with Quotations from Chairman Mao Tse-tung

which was produced in 1964. The Red Guards must carry the book containing hundreds of advice as a guide. "A revolution is not a dinner party, or writing an essay, or painting a picture, or doing embroidery," said one of Mao's sentences in the book.

Between August and September, about 1,800 people died in Beijing because of violence by the Red Guards, including those who were urged to commit suicide. Another major riot occurred in Shanghai. It was not known exactly how many victims of the Cultural Revolution. It was estimated that the victims were no less than 500 thousand and could reach two million people.

Zhang Hongbing, who in 1970 was only 16 years old, complained of his own mother for criticizing the Cultural Revolution. According to The Economist, his mother was tied and beaten in public to death.

Decades later, Zhang became a lawyer, and his hard task was to restore the good name of his mother, who had died as a result of his own behavior. "I want to make people in China think. How could there be such a horrifying tragedy of a son sending his mother to execution? And how can we prevent it from happening again?" he said.