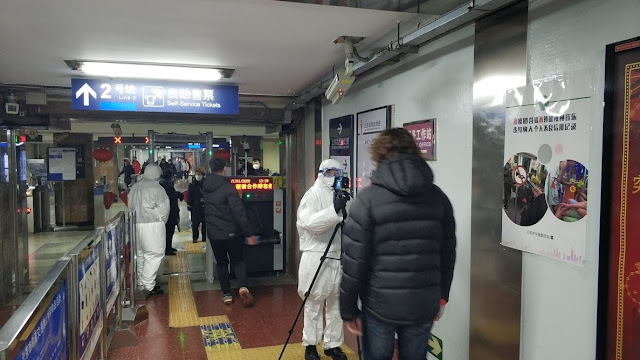 "There is a significant amount of evidence that this came from that laboratory in Wuhan," claimed Secretary of State Mike Pompeo in This Week which aired on ABC channel the first week of May 2020. The laboratory he was referring to was the Wuhan Institute of Virology (WIV).

As David E. Sanger reported for The New York Times, Pompeo's belief was based on reports from intelligence agencies stating "It is possible an animal that was infected with the coronavirus in the laboratory was destroyed, and a lab worker was accidentally infected in the process."

Pompeo's accusation that the coronavirus originated from WIV was a continuation of what his boss Donald Trump echoed. President Trump, last month, claimed China was responsible for the COVID-19 pandemic.

Trump said Beijing "made a horrible mistake, and they didn't want to admit it." However, when he was pressured about the evidence of his accusation, Trump stated he was "not allowed to tell you that."

Allegations that China was the culprit of the emergence of new viruses on earth were nothing new. When SARS hit the world in 2002–2003, Russia believed SARS-CoV-1, the virus behind SARS, originated from a Chinese-owned laboratory.

Returning to the origins of COVID-19, was it true that SARS-CoV-2 came from a laboratory in Wuhan?

For nearly a decade, as Joby Warrick, Ellen Nakashima, Shane Harris, and Anna Fifield wrote for The Washington Post, a team of scientists from Wuhan, China, explored South Asia in search of bats. The scientists entered the caves, caught the razor-toothed mammals with nets, and took feces samples.

They also caught insects and rats that lived around bat nests. Not to forget, the team also collected blood samples from surrounding villagers who hunt bats every day. After the samples were collected, the team of scientists went home.


However, before arriving at their respective homes, of course, the scientists first transited at the Wuhan Institute of Virology by carrying tubes and bottles containing pathogens, parasites that can cause disease in their hosts, samples from bats.

According to The Washington Post's report, on several occasions, Chinese scientists were successful in bringing home foreign variants, or various not yet known to science, from the coronavirus. The first version of the virus, avian coronavirus, was discovered in the 1930s by Arthur Schalk and M. C. Hawn.

Search for new viruses from bats was carried out especially after SARS swept the world in the early 2000s. At that time, a Chinese research team found that the virus that killed around 1,000 people was sourced from horseshoe bats living in caves in Yunnan Province, China.

Subsequent studies contained in Science Magazine confirmed that bats were natural reservoirs, organisms that were a place to live and breed for pathogenic parasites, for various zoonotic diseases that transmitted from animals to humans.

So, for what did WIV scientists collect bat samples? Kelsey Piper, in her presentation in Vox, said the scientists were collecting pathogens to conduct controversial gain-of-function research, a study that made viruses more dangerous and easily transmitted.

Gain-of-function research was conducted to find out which viruses threatened humans if they later transformed or mutated so that precautions could be designed from the start. Coronavirus, Explained, the documentary series by Vox and Netflix, described the research of viruses from bats by Chinese scientists aimed at marking which ones most easily jumped into humans.

Viruses were characterized in two types: high risk and low risk. In general, viruses that were classified as high risk were dangerous to human lives in a short time. However, to some degree, the most dangerous was a low-risk virus.

The reason was, if the risk was low, the virus was very likely to spread easily because people who were exposed would not show symptoms immediately.

Still referring to The Washington Post's report, to this day, a virus research team from Wuhan had successfully identified so many bat-related viruses. The research team had also published more than 40 scientific papers on hundreds of new coronaviruses.

One of the publications produced by Wuhan virus scientists was a study in Nature. The study mentioned the existence of the RaTG13 virus, a variant of the low-risk coronavirus which was predicted to easily spread to humans.

In further research reported in a study in ScienceDirect published on April 6, RaTG13 and SARS-CoV-2 had identical genome sequences. It reached 96 percent. So, let's say if WIV scientists discovered SARS-CoV-2, which now made the world chaotic, they could find out first and make antidotes more quickly.

However, although the work of gain-of-function research was modifying the virus, Shi Zengli, lead researcher in Wuhan, said that WIV never had the SARS-CoV-2 virus that triggered the pandemic. Shi even swore the laboratory in Wuhan and COVID-19 was unrelated.

Maureen Miller, an epidemiologist who worked with Wuhan researchers on government funding, strongly rejected the notion that SARS-CoV-2 was born in the Wuhan lab. Miller called Shi a brilliant scientist and was very committed to preventing bad scenarios from happening.

On the other hand, Jason Rao, a biological security expert and former adviser to President Barack Obama, said that nature had created a new pathogen, SARS-CoV-2, which was currently available of moving quite effectively from human to human.

Yuan Zhiming, a professor who was a member of WIV, gave a response about the rumor of the birth of SARS-CoV-2 in the Wuhan lab to David Stanway from Reuters. He asserted that WIV did not have the intention and ability to design a new coronavirus.

In addition, Yuan said there was no information in the SARS-CoV-2 genome that indicated it was man-made. Yuan stressed that the Wuhan laboratory had sophisticated protection facilities and stringent measures to ensure the safety of laboratory staff and protect the environment from contamination.

Richard H. Ebright, professor of chemical biology at Rutgers University, said the allegations at the Wuhan lab were not to be trusted.

Although viral research within the framework of gain-of-function research had a good purpose, as did the Wuhan lab, many scientists cautioned that this type of research carried great risk. Referring again to Piper's presentation in Vox, the risk in question was related to human carelessness.

A lab might have qualified security facilities, so pathogens could not escape. However, human negligence made it possible.

In 1978, for example, a photographer at the University of Birmingham Medical School was infected with smallpox due to a virus sample that had been investigated missing from a biological laboratory located in the building where the photographer was.

In 2014, the Food and Drug Administration was about to move offices. When cleaning up, hundreds of virus samples wrapped in cardboard were found in the corner of the office. Six of these samples were already open. The further investigation stated that the boxes had been in the corner of the FDA's old office since the 1960s.