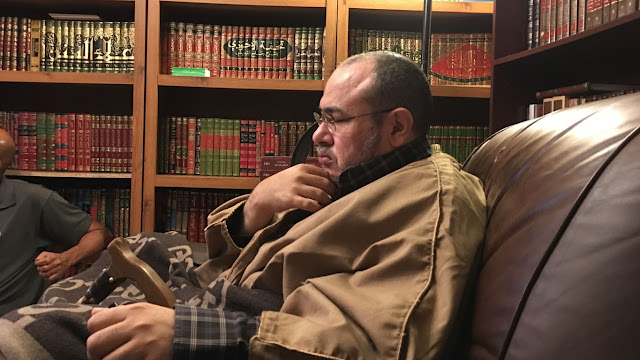 The writing was divided into two types. The first was Khaled Abou el-Fadl's dissertation and writing with other scholars. The second was the long-term intellectual project. This second project wanted to articulate the concept of beauty in Islamic teachings. Meanwhile, the first type did not represent this concept.

Abou el-Fadl's dissertation at Princeton University under the guidance of Shi'ite renowned modern scholar Hossein Modarressi was a systematic study of ideas and treatment related to rebellion and political resistance in classical Islamic law.

In 2001, this dissertation was posted as Rebellion and Violence in Islamic Law

. Abou el-Fadl certainly did not discuss what was beautiful in rebellion and robbery. When he wrote together with others, for example, in Democracy and Islam in the New Constitution of Afghanistan

, which was facilitated by think tank RAND Corporation, he also did not elaborate on beauty.


Explore the beauty of fiqh

The concept of beauty in Abou el-Fadl's thinking was not obtained through the analysis of art and Sufism in Islamic culture. He dug it precisely in Islamic law. The Sura Al-Muddaththir verse 31, And none can know the forces of thy Lord, except He, became the lighter to look for who had the right to hold the title of a true Muslim.

The verse encouraged Abou el-Fadl to negate the authoritarian attitude in interpreting the text and then was confronted with an authoritative attitude. The explanation was loaded with text analysis and hermeneutics.

Sura Al-Muddaththir verse 31, according to Abou el-Fadl, rejected every claim of a person as an army of God who had been granted His authority and then arbitrarily translated His law. Authoritarianism here referred more to the hermeneutic methodology that plowed and falsified the mechanism of searching for meaning from highly subjective and selective texts.

This threatened the diversity of meanings. Meanwhile, the authoritative attitude necessitated the meaning of texts and ambiguities that were common in the process of extracting the meaning and dynamics of Islamic law.

In this view, the phrase the forces of thy Lord should not be arbitrarily translated to usurp the absolutism of God. The authoritative attitude was built from honesty, perseverance, completeness, worthiness, and self-restraint that must be possessed by a faqih in understanding religious texts.

In the hermeneutic balance, this was part of the rational obligation. Such hermeneutical discussions were actually common in the study of fiqh, a philosophy or fundamental methodology in Islamic law. Therefore, Abou el-Fadl placed great importance on the fiqh approach that held at the principle of rational interpretation which was an umbrella for the application of the law.

This view was first posted in And God Knows the Soldiers

. This was part of Abou el-Fadl's efforts to oppose puritan and non-rational oriented authoritarianism such as the Wahhabis. He relentlessly strived to restore the meaning of shari'a in modern life, seized it from extremists, and upheld the beautiful questions in Islamic teachings.


The basic meaning of shari'a was the path to goodness and ethics. Shari'a in Abou el-Fadl's view was equivalent to the principles of natural law. Freedom, egalitarianism, and justice were fundamental principles of shari'a.

Keep in mind, shari'a here was not in the narrow sense of Islamic shari'a which became the authoritarian jargon of some parties to determine what Islamic law was. Shari'a was the umbrella of the beauty of God.

His beauty was manifested by love, compassion, glory, and justice. If the law did not meet these elements, then it did not meet authoritative criteria so that it could lead to tyrannical and despotic attitudes in religion.

The only traditional power that was able to encounter the tendencies of religious extremism and even marginalize it was the jurists because they had the right to interpret religious texts. Abou el-Fadl's intellectual attitude became more apparent after the September 11 attacks.

Extremism had become a global threat. Abou el-Fadl constantly voiced the dangers of religious extremism in this life. He even became an adviser to George W. Bush to determine moderate and puritanical meanings in contemporary Islamic groups.

Abou el-Fadl's position in the Commission on International Religious Freedom during the leadership of Bush Jr. was considered a moderate voice of Islam against the elements of radical Islam and fighting for a plural, tolerant, and non-violent Islam.

This appointment was not something comfortable. Some accused Abou el-Fadl of legitimizing the imperialist agenda in combating global terrorism by voicing moderate and democratic Islam. Islamic haters accused him of infiltrating the Bush Jr. government.

Pipes accused Abou el-Fadl of being a new Islamist because he followed the intellectual passion of Mohammed al-Ghazali, a moderate Muslim scholar of the Muslim Brotherhood, despite being anti-Wahhabism.

Pipes even accused Abou el-Fadl of secretly abetting a terrorist plot funded by Saudi Arabia. In Pipes's view, the shari'a Abou el-Fadl taught was the same as the law that encouraged slavery, the killing of infidels, and the oppression of women and non-Muslims as second class citizens.


Spirit of modernity in the shari'a


Apart from Abou el-Fadl's appointment at the time, these two views did not represent his general thinking, especially the cynical and dangerous views of people like Pipes who supported neoconservatism.

Abou el-Fadl clearly and in detail articulated shari'a in the spirit of modernity and how it did not oppose democracy and human rights. The basic foundation of him was in the view of fiqh. Therefore, besides teaching at the UCLA School of Law, he was active in voicing ideas through two movements.

The first movement was taken directly from the reflection of Abou el-Fadl's book which he wrote while he was a doctoral student at Princeton University: The Search for Beauty in Islam

. The second movement was intellectual jihad as a counter to the meaning of the wrong jihad through the formation of The Usuli Institute. This institution was formed in 2017 as an effort to revive the spirit of classical jurisprudence until the era of al-Andalus in Spain.

The two movements were important to win the war of ideas according to the expression on the Usuli website: Help us win the war of ideas. Certainly different from the goal of terrorist jihadists, for Abou el-Fadl, the victory of this role was to seek the beauty of universal Islamic teachings.

It was proven that, what Pipes was afraid of but also Wahhabi puritans hated, was Abou el-Fadl's continuity in voicing friendly Islam and mercy for all, including women. He highly valued the position of women in Islam.

In Speaking in God's Name

, Abou el-Fadl explored the authoritative view of women who were glorified in Islam, including quoting the opinion of al-Tabari who allowed women to lead prayers with male worshippers and be judges in court in all cases.

Although Abou el-Fadl apologetically admitted that he was not competent to discuss gender studies or feminist fiqh, he gave a positive and appreciative introduction to Amina Wadud's book Inside the Gender Jihad

Why was Abou el-Fadl so serious in contrasting what was beautiful and good and what was bad and ugly in Islam? For those who understood fiqh, the answer was not difficult to guess. There was a discussion of binary opposition in classical rational disciplines such as the concepts of husn and qubh which represented two ethical scales: the moral and the immoral.

Abou el-Fadl tried to raise this category of fiqh in modern discourse in order to determine a just and balanced Islamic law. The idea was actually similar to universal ethics that developed since the Ancient Greece. Moreover, he also emphasized the general norm of husn al-khulq, the emphasis on improving character or ethics as a guide in dealing with God and humans.

By studying Islam traditionally to many sheiks in the Middle East and also earning degrees in Islamic studies from Yale University, University of Pennsylvania, and Princeton University, Abou el-Fadl was an authoritative voice in reading classical Islamic law and modern law.

The law in Abou el-Fadl's eyes had a gentle and beautiful face. Beauty and beautiful were his semantic preferences, even to refer to an ethical man as a beautiful man.