Corona in Brazil: Gangsters are more responsive than Bolsonaro 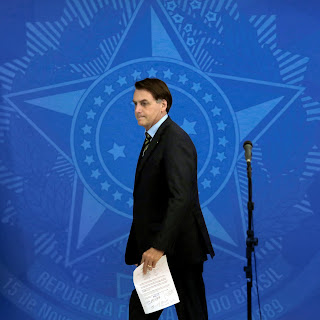 Gangsters, mobsters, cartels, yakuza. Although known by various names, they have one thing in common: criminals feared by the public, law enforcement, and the government. Some of them even have impunity.

The Mexican Armed Forces have tasted the bitter fruit of the capture of Ovidio Guzmán López. He is the son of the leader of the Sinaloa Cartel in Mexico, Joaquin "El Chapo" Guzmán. Ovidio was arrested without resistance and without escort on 17 October 2019.

Knowing this, the Sinaloa Cartel did not remain silent. Armed with heavy military weapons, they rioted in the city of Culiacán, Sinaloa. Gun battles took place throughout the city. A policeman who was reportedly involved in the arrest of Ovidio became a victim, fired with 150 bullets to death.

So much from the city war that caused the tense situation, the Mexican government surrendered in its true sense: decided to free Ovidio. In fact, the man involved in the drug trades had been indicted since February 2019. Until now, no attempt has resulted in the arrest of Ovidio for the second time.

"This decision was taken to protect citizens. You cannot fight fire with fire," said Mexican President Andrés Manuel López Obrador. "We do not want deaths. We do not want war."

It's hard not to associate the word "gangster" as a crime. It's just that, sometimes gangsters have a better image than the government in the eyes of society, as happened in Brazil, precisely in the City of God, Rio de Janeiro, when the corona pandemic is happening like now.

Rio is occupied by three high-class gangsters. First is Comando Vermelho (CV), which emerged since the late 1970s. They controlled large areas, including the Zona Norte.

The second group is Terceiro Comando Puro (TCP), which controls Maré and Azari. TCP is the biggest rival of CV that was founded in 2002. They even threatened each other through social media before exchanging fire over territories.

Besides these two, there is also Adios dos Amigos (ADA) which was formed by Celso Luis Rodrigues after parting with CV. Luis was kicked out of CV for killing another member. One of the events that made ADA's name stick out was its courage in firing a police helicopter to hit the ground. The pilot died instantly.

The world of gangsters in Brazil has begun to change since Jair Bolsonaro won the 2018 presidential election and assumed the post in 2019. Since then, he has chosen war with all gangsters in Brazil, including Rio. This attitude, in turn, ironically creates new terror for the community.

In January 2019, not even a month after Bolsonaro took office, he signed a presidential decree which essentially made it easier for Brazilian citizens to own and use firearms. Initially, the government only allowed 50 short-barreled weapons per year to be traded to the public. With the new rules, every year 5,000 weapons may be sold freely, plus 1,000 rifles.

Previously, the police also had the discretion to determine who could use weapons. Bolsonaro's decree annulled that authority. Those on the outskirts of the city who have a percentage of murder more than 10 to 100,000 people may have a maximum of four weapons. Hunters and weapons collectors are also included in the category of having a permit to buy weapons.

"To guarantee citizens their legitimate right to defense, I, as president, will use this weapon," said Bolsonaro as he prepared to sign the presidential decree.

What happened next? The war between the police and gangsters is getting more intense. Everywhere, especially in Rio, there was a shootout. Previously, gangsters got rifles through contraband. With this policy, of course, their opportunities to add weapons are also increasingly high.

The confession of a gangster member in Rio shows that the war between gangsters and the police will not be completed because corruption has not been eradicated by the Brazilian government. This war is actually detrimental to the affected civil society.

Bolsonaro himself continues to give the green light for the police to shoot dead in the war against gangsters. This power is overused by the police. Not only gangsters who fight, but those who have given up will also still get a hot lead.

In an operation, Brazilian police boarded a helicopter and fired eight suspected perpetrators involved in the war between the gangs in Rio. Eight people died in the operation. Four of whom had even been cornered home. Two of them surrendered, but the police refused.

"The police feel authorized to kill," confessed a witness. Two others found above, they were also shot by the police mercilessly.

One of the events which quite shocked the Brazilian people was the death of the eight-year-old girl, Ágatha Félix, in September 2019. The little girl who lived in the Rio slum was killed with a gunshot wound to her back.

Ágatha was clearly not a member of the gangster. During the incident, she was walking with her mother and a motorcycle suddenly passed. The police then fired a gun at two people who were riding without caution so the bullet hit Ágatha.

Ágatha's grandfather, Ailton Félix, said without hesitation, the bullet came from the police. And at that time, there was no armed contact. The two suspected gangster members who were riding a motorbike didn't shoot anything.

Instead of getting sympathy for eradicating gangsters, the police and the government are plagued by criticism. The enemy of the people now is not only gangsters but also the police. Brazilian politician, Guilherme Boulos, then tweeted that the culprit of this case was the Bolsonaro's police of shooting dead which was also supported by Rio's governor, Wilson Witzel. Recorded from January to August 2019, the police shot dead 1,249 people, 16 percent more than last year.

"He is responsible for the murder," tweeted Boulos.

The chaotic leadership of Bolsonaro was also seen during the corona pandemic. When the number of corona sufferers reached thousands in Brazil, Bolsonaro still underestimated the virus by describing it as a common cold. In arrogance he also mentioned, if corona infected him, then he will only be a little sick because he had a track record as an athlete in youth.

When governors in several Brazilian states decided to impose physical distancing, Bolsonaro actually accused this move of making poor people lose their jobs. He actually insinuated and dismissed the invitation for social restrictions, even now.

Unlike Bolsonaro, Witzel continued to forbid its citizens to go to the beach, especially Copacabana, the most crowded spot in the country, which was warned by the Brazilian health ministry itself. But what happened? Bolsonaro confronted Witzel instead.

"Ban people from going to the beach? My God! Beaches are outdoors. There's no problem going there at all. What's he thinking?" said Bolsonaro.

Feeling Bolsonaro did nothing in overcoming corona, gangsters in Rio finally took the initiative to take action that was more beneficial to the people: banning them from leaving the house during the pandemic. Understandably, this pandemic is also detrimental to the gangsters because drug trades are temporarily stopped.

In Mexico, drugs have increased in price because China, which is a distributor of raw materials for its manufacture, is affected by the corona pandemic. Brazilian gangsters who might not want to suffer similar losses then go down to the busy streets urging residents not to be exposed to corona.

"We're imposing a curfew because nobody is taking this seriously," said the message sent by the Rio gangsters. "Whoever is in the street screwing around or going for a walk will receive a corrective and serve as an example. Better to stay home doing nothing."

This sporadic act does not apply throughout Rio, even with the same standard operating procedures. In Morro dos Prazeres, for example, gangsters impose restrictions on leaving the house starting at 20:30. Whereas in Santa Marta, gangsters give out soap and put up an appeal to wash their hands. In Maré, gangsters limit the shop to activities. Only the bakery is open until 11 PM.

"Nobody wants to leave the house, first for fear of being exposed to corona and now there is an order," said a resident in Maré.

When residents obeyed gangsters, Bolsonaro who seemed negligent in handling corona actually received criticism, especially from Brazilian left-wing politicians. In one of the documents, many politicians demanded that Bolsonaro should resign from his position.

Under the current situation, Bolsonaro's authoritarian leadership cannot be expected. At least, gangsters get more appreciation than Bolsonaro. "Bolsonaro is more than a political problem - he has become a public health problem. He should resign," noted the document.
Politics