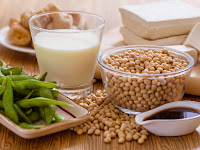 Soybean is one type of food that can reduce the risk of being overweight, which can lead to other diseases such as diabetes. About 64 percent of the world's population who have excess bodyweight have a higher risk of death than malnutrition.

Therefore, it is important to prevent excess bodyweight. One of the ways to preventing excessive weight or obesity is to update the diet.

One of the secrets why Japanese people are so rare in obesity because they often move and eat soybeans in various foods. Milk, snacks, traditional foods to soy-based extracts of pills are there.

Soybeans can prevent weight because the protein content is very high compared with other types of nuts. Soy contains about 38 percent of protein or equivalent to animal protein. In addition, it has a healthy fat content, so it is safe for consumption.

In addition to its high protein content, soybeans are also rich in dietary fiber, where it will be difficult to digest by the stomach, so it will delay the hunger.

Soybeans also have isoflavone compounds that function to repair cells and prevent their damages, so it is suitable to be consumed for diabetics to prevent diabetes.

Soybeans can now be easily obtained for consumption, ranging from soy milk, tempeh, tofu to other snacks made of them.