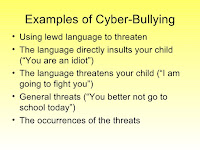 Cyberbullying is defined as all forms of violence children or adolescents experience, made by their friends through the cyberworld or the internet.

What you should observe here is that the victim and the perpetrator are still under 18 and not legally considered mature. The case is referred to cybercrime if one or both of them are over 18.

Forms and methods of cyberbullying are diverse, ranging from threats via e-mail, uploading photos to embarrass victims, creating web sites to spread slanders and mocks, to accessing social media of others to threaten them and to make troubles.

Don't consider this case trivial! Prolonged cyberbullying can turn off children's confidence and make them depressed, worried and always feel guilty or fail because they can't cope happening disturbances by themselves.

In fact, some think to end their lives because they could no longer bear to be disturbed. Well, do you still consider cyberbullying trivial?

Here are some suggestions that can be done to prevent your child becoming a victim of cyberbullying:

1. Don't give out personal information such as home address and phone number in chat rooms, blogs or personal web sites.

2. Don't give out passwords of e-mail accounts and social media to anyone except parents.

3. Don't open e-mail from unknown people or from school friends known as interferers.

4. Use e-mail services that can filter out the messages.

5. Use call block services to arrange phonecalls from certain people you want to avoid.

6. If you already read intimidating, humiliating messages, you ignore them and don't need to be addressed. Just save the messages because they could be used as evidence.

7. Immediately talk with the people if you feel disturbed by the messages someone sends via the internet, so that the problem isn't prolonged.

So, be vigilant and supportive if your child experiences cyberbullying. You can also teach children the internet etiquette to respect for others and tell them that bothering other people is wrong and could harm.

How to Traumatize Your Children

Caring for Your School-Age Child

Have a New Kid by Friday