Just turn off your TV 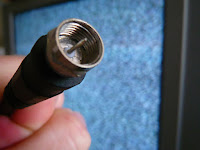 It sounds extreme, but this is one of the advice to parents. Your children's brain development and ability must develop well.

What's the adverse impact of television on your brain? What about television programs or films devoted to children?

Television only provides information to the two senses: eyes and ears. The visual acuity and three-dimensional views of your children ain't fully developed until the age of 4 years, though.

The resulting picture of television screen is a two-dimensional, unfocused, vague image because it's composed of ray dots. It makes your children's eyes have to force themselves to keep the image becoming clear.

Television, also other electronic gadgets, emits electromagnetic waves. It's suggested the position of watching is at least 120 cm from the TV and 45 cm from computer screen.

Visual systems, which includes the ability to searching, scanning, focusing and identifying what goes into the field of view, are disturbed by the activities of watching TV. These visual skills need to be developed in conjunction with effective reading, though.

While watching, your children's pupils ain't dilating, and there're virtually no eye movements particularly important in reading activities. Eyes are required to keep moving from left to right of the page when reading.

The ability to focusing attention also relies on the visual system. Meanwhile, the television pictures rapidly changing every five-six seconds on most show impressions and two-three seconds on ads make the thinking brain have no chance to process the image.

In fact, the thinking brain needs five-six seconds to process the image when receiving stimulus.

Television pictures drug brain functions and destroy the balance and interaction between the left and the right hemispheres. Most television shows for kids put the left hemisphere and a portion of the right into the alpha waves.

In general, reading generates the fast, active beta waves while watching television increases the slow alpha waves in the left and the right hemispheres. The left hemisphere is an important center in the activities of reading, writing and speaking.

The left brain is the place where abstract symbols are associated with the sounds. The fluorescent, vibrating light source of television is presumably related to the increased activity of the slow wave.

The primitive brain can't distinguish between the real picture and the picture on the TV because the vision is the responsibility of the thinking brain. Therefore, when the TV broadcasts close-up images and glowing pictures of a sudden, the primitive brain along with the limbic immediately prepare a response of fight-or-flight by releasing hormones and chemicals throughout the body.

The heartbeat and blood pressure rise. The blood flowing to the muscles of the limbs increases, getting ready to face danger.

Because it occurs in the body without being followed by the corresponding movements of the limbs, certain TV programs actually put you into a state of chronic stress or anxiety. In adults who experience chronic stress, the growth of their hemispheres is stalled.

When your children's brains are exposed to visual and auditory stimuli, what absorbed is only the visual. Illustration of this phenomenon can be seen when your children are treated to the spectacle of a video whose sound doesn't match to the visual movement. When you asked them, they blank.

You could argue whether it's wrong just to use a television for entertainment.

Television has a so deep effect on your life, feeling or spirit. Watching television makes you detached from real life. In a comfortable chair in the cool room with lots of food, you sit watching the homeless, starving, suffering people on the screen.

You're touched to see their fate but not doing anything.

You may say reading any book can evoke similar feelings without doing anything. However, while reading a book, your mind can imagine and has a chance to think about it. That thought may lead your children to the idea inspiring to do something.

You won't forget what you've ever seen. The limbic brain is associated with memory, and you remember the image on the TV consciously, unconsciously or subconsciously. So you hardly create an imagination from a storybook if you've ever seen the movie.

On the contrary, you're often disappointed when watching a movie after reading the book. Your imagination is much richer than what can be shown on a movie screen.

When watching television, your children ain't using the imagination at all. It means a certain part of the brain to create a picture is less trained.

You're equipped with a capability called heart intelligence. It needs to be developed among others by interacting with people. You're experiencing their non-verbal language, such as how they move, what's the tone of their voices, whether they look the other way while talking.

This is how you learn to see the consistency between verbal and non-verbal cues to find the truth.

So, d'you still let your children spend the time in front of TV?

Laughing Without an Accent