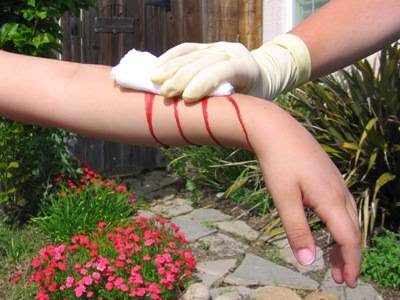 For the case of serious injury, the first thing you'd do is asking for help. While waiting for help coming, you can do first aid. But before giving aid, make sure alls are safe: victims, rescuers, and the environment.

If having an access to a phone, you can call 911. In addition to providing ambulance, 911 service can also be utilized for remote emergency consultations on first aid techniques.

Before providing any aid, make sure the condition of airway, breathing, and circulation (ABC) is in an undisturbed state. This is the most critical factors to the life.

After ascertaining the ABC condition, do first aid as appropriate. If bleeding is severe, the initial relief that you need to give is to stop the bleeding!

To stop the bleeding, do the following techniques:

1. Make sure the patient always in a state of lying. Heavy bleeding shouldn't be treated as the victim in a state of sitting or standing.

2. If it's possible, position the head slightly lower than the body or lift the leg. This position can reduce the risk of fainting by increasing blood flow to the brain.

3. Lift the bloody high as possible from the heart. For example, if the bleed is the calf, put it on top of the pedestal. So, the position is higher than the body.

4. Remove the dirt from the wound but don't try to revoke the stuck object.

5. Apply direct pressure over the wound. Use a clean bandage. If it ain't available, use a handkerchief or piece of cloth. Never check bleeding by unveiling pads.

6. If the blood is still sipping, reinforce the pressure. Add another handkerchief on it without the need to throw the first because in the out blood there're clotting factors.

7. Maintain pressure until the bleeding stops. If it's been blocked, bandage the wound directly above the absorbent cloth. If there're no bandages, use a piece of plain fabric. Immediately take the victim to the hospital.

If the bleeding doesn't stop, do continue until further help. Actually, there's a technique called tourniquet, but it'd only be done if you've received training. If false, this technique is actually harmful.

Merely as an illustration, tourniquet is a strongly tying rope so that the flow of blood vessels is blocked. This bond has a knot that can be tightened and loosened. Every ten minutes, the bond must be loosened for 30 seconds to allow the blood flowing again. The goal is to prevent tissue death due not to receive blood supply.