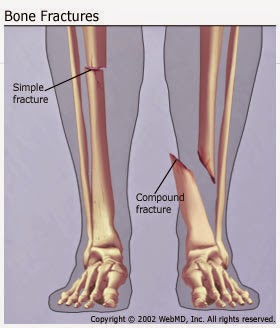 In a severe accident, bleeding is often accompanied with broken bones. If this happens, the main thing to note is, don't move a broken bone. This may worsen the condition.

If it's unavoidable, try the movement as little as possible.

A broken bone is usually characterized by severe pain due to muscle contraction, swelling, bruising, a bent-shaped organ, improper drooping, or any broken sound during the accident.

But sometimes, a broken bone ain't accompanied by obvious signs. If in doubt, just to be safe, let's just broken bones happen. In other words, the treatment is based on the procedure of bone fracture.

To ensure the bones not moving, attach a splint on parts that've broken. The trick is, connect broken parts with something strong, so they ain't moving. Use wood or beam. However, in emergency situations, things we need are generally not in the scene.

As a workaround, you can use other rigid objects, such as cardboard. If it ain't available, use his or her own limbs. For example, if the fracture is right calf, belt it with the left. As a strap, you can use the cloth tears.

To ensure the bones not moving, use the rules of the two joints. That is, a broken part is tied along the two joints, each above and below. For example, the fracture is the calf. Attach a splint on the calf beyond knee and ankle joints.

You Are the Placebo