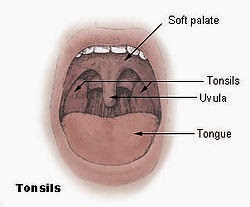 This disease usually affects children and often makes you confused. Often, doctors easily recommend tonsillectomy when in fact, the children are quite treated the infection.

Conversely, sometimes, you don't wanna take surgery. In fact, if it ain't removed, the tonsils will instead be a source of disease.

Tonsil is one of the bastions of the human body, especially for children. At that age, the immune system is still weak. These organs are in the cavity of the throat, in the left and right rears of the oral.

These organs are located in the front guard; the task is to ward off germs that enter the mouth.

In addition to the tonsils, in the throat cavity, there's one more bastion of the body; its name is adenoid. It's located on the ceiling above the cavity of the throat, close to the nose channel. Its function is similar to the tonsils as an antidote to the germs that enter from the air into the airway.

In a normal state, actually, in the mouth and throat are a lot of germs. However, the germs ain't to make the children sick as long as their immune systems are in good condition. When the immune system decreases, the germs can be malignant and causing infection.

Because the immune system of children ain't been as strong as adults, they're more susceptible to infection.

When infected, the tonsils will be inflamed. If the children are asked to open their mouths wide, there will the tonsils be swollen; the color is red. The inflammation is accompanied by fever and pain in the the throat, especially when swallowing food.

Tonsillitis is widely caused by viruses and bacteria. If the culprit is a virus, it requires pain and fever medications, and home care. The infection will go away by itself after the endurance is improved.

However, if the infection is caused by bacteria, it also requires antibiotics. Tonsillitis doesn't always have to be operated.

When your children are taken to the hospital, usually, the tonsils do look big. So, the doctor suggests surgery. In fact, the condition of enlarged tonsils can't just be the basis of operation.

At the time of the attack of the infection, it's natural that tonsils are swollen quite big because happening is inflammation. After the infection is treated, the tonsils shrink again, and your children are back to health; the tonsils don't need to remove. The doctor's term is, there's no indication for surgery.

Surgery is the last option. This action is only recommended if the tonsils have turned into a source of disease, no longer a deterrent. At that time, there's no other choice, the tonsils should be removed.

Tonsils have been a source of trouble if they've become a hotbed of germs that causes recurrent infections. This is similar to the state of war when the blockhouse has dominated by your opponents and become their headquarters.

So, at that time, there's no other choice, the fort should be attacked.

In healthy conditions, tonsils serve as an antiseptic. However, if they too often get infections, they could become a hotbed of germs. It can be seen, how often your children suffer from infections. If within a year, they're to undergo five or six severe throat infections, it means, tonsils have turned into a source of disease.

If the children are severe throat infection subscribers every two months, that means, it has an indication of operation. If this condition is left, the effect of the infection can spread to other organs, such as the heart and kidneys.

If enlargement of the tonsils ain't due to recurrent infections, it ain't a reason for surgery.

Surgery also needs to take if the tonsils swell too large to clog the airways, moreover if the adenoid is also enlarged. If they're not operated, this blockage will cause the children to have breathing difficulty and be concerned to obstructive sleep apnea.

The doctor is more decisive here. However, as usual, you always have the right to obtain a second doctor's opinion.

Even after recovering, tonsils still look bigger than normal size, it's still not an indication of the operation. By the time of upgrowing, mouth and throat will be larger with age, so that the tonsils appear smaller.

At the age of 12, the function of the tonsils as a bastion is already being replaced by other immune systems.

Due to the critical issue of this operation, the stage is when the doctor determines any indication. Every doctor has a different level of foresight. If the doctor is not careful and rushedly recommending surgery, the children must be missing something that doesn't really need to happen.

Often, you don't want your children's tonsils to operate when in fact, this action is necessary. In fact, you consider doctors only to seek material gain when they offer the option of surgery.

As other medical procedures, removal of tonsils is done by weighing the risks and benefits. If the tonsils ain't removed, your children may experience more serious complications. The tonsils can be a source of infection.

Not only local infection in the throat, but it can also spread to the heart and kidneys.

Because the risk is an operation reason, don't underestimate strep throat in children. Strep throat potentially becomes a subscription disease if the treatment is inadequate. Incomplete treatment can be caused, for example, by inappropriate selection of antibiotics.

That's why, you ain't encouraged to do your own treatment, for example, by giving antibiotics your children ever took at the time of illness. If you just give mouthwash, it's okay. However, when it comes to affairs of antibiotics, you have to turn the matter to the doctor.

Then, when should you bring your children to the doctor? The benchmark is simple, the inflammation has been accompanied by fever and sore throat, especially when swallowing. Two of these symptoms are signs that the inflammation is caused by infection.

Your children need to see a doctor immediately if strep throat ain't lost in 48 hours; fever is above 102 degrees Fahrenheit, and pain is when swallowing.

When you come to the doctor early, the infection can be treated immediately before it becomes worse. With early treatment, tonsillitis is expected not to develop into a chronic and commute relapsing. By doing so, the risk of removal of tonsils can also be minimized.

Once your children are cured, you must keep their illness not recurring. The trick is, of course, to keep their immune systems because the infection is determined by the resistance of the body. Your children should eat a balanced nutrition, adequately rest, be physically active, maintain hygiene, avoid contaminated friends, not play the rain, and the likes.

You're better to look a bit grumpy than letting them deal with a scalpel.

The "O, My" in TonsillectOMY & AdenoidectOMY

Cheaper by the Dozen

Take Charge of Your Child's Sleep