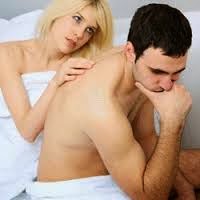 Inhibited ejaculation can occur in those who have sex over and over again in a short period of time. It means more than three or four times. Short period of time is also very relative and individual. It can be in one night, round the clock, or six to eight hours.

Although it likely befalls you, the above cases are very rare, so it doesn't attract much attention.

Inhibited ejaculation are also caused by physical and psychological factors. Physical causes are such as the sympathetic nerves disorder in the lumbar region, also by diseases that manifest Parkinsonism. Some of certain drugs can also trigger the occurrence of the delayed ejaculation, such as butyrophenones and some classes of ganglionic blocking agents.

Meanwhile, widely touted causes of psychic are an excessive imagination, fatigue, and being stuck in a routine. Disorder caused by the psychological factors can be treated with a regular exercise and structured stimulation.

The "What's Happening to My Body?" Book for Girls

The "What's Happening to My Body?" Book for Boys