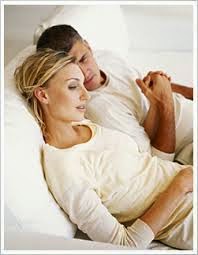 Sexual intercourse isn't always capitalized with lust. There's a mutual understanding between husband and wife, also the selection of an appropriate time, in order to obtain the sensation.

If you wanna be happy in each other in a sexual relationship, you'd be able to establish an effective communication. You don't hesitate to ask or request time she likes to fuck.

When the wife wants sex in the morning, do it. At that time, her stamina is ready, so surely, she would be easy to reach orgasm. If you have to rush immediately to the office, you might be able to do a quickie or sex without penetration as one variation.

The essence is the agreement and understanding on each partner's needs. For women, sex isn't always the need for penetration. Romantic atmosphere, affection, caress, or attention from you has been fun. It'd be better if you understand when her libido comes.

A woman's desire for sexual intercourse is to be high on the fertile period. The surge of libido in this fertile period is for women who don't use contraception, including who've been sterilized or using a spiral. Yet, until now, it's not known why the female libido is really high when the fertile period comes.

The presumption is, in the fertile period, women produce pheromones more, chemicals that send messages to the opposite sex which increases the sexual attractiveness. You couldn't hurt to take advantage of this fertile time to make love because it's easier to achieve sexual pleasure.

Just keep in mind, sexual intercourse during the fertile has a high potential to produce a pregnancy. If you don't wanna have a child, don't forget to wear a condom.

Female fertile period lasts six days each month, five days before ovulation and in the day. Ovulation is the release of a ripe egg from follicle and usually occurs between day nine to seventeen after the beginning of menstruation.

Ovulation is often delayed, for example, due to stress, during lactation, or in premenopause.

Determining the fertile period can also be done by looking at the changes of the vaginal mucus. When estrogen increases, cervical mucus can be felt in the vagina. In the beginning, it'll give you the sensation of damp, and there'll be a small amount of white or cream mucus. In test with a finger, mucus tends to retain its shape and is easily broken.

At the transition phase, the amount of mucus will increase and have a color of clouds. The elasticity is low, and it has a wet sensation.

When approaching ovulation, mucus is more and can be ten times as much. This mucus gives a slippery sensation in the vagina. This fertile mucus is like an egg white: thin, watery, and transparent. In a test with a finger, the mucus is elastic and stretchy before rupturing.

Even so, in general, having sex on fertile days just makes happy on both sides. Penetration takes place more easily. Woman's body is more easily stimulated to achieve orgasm in this fertile period.

It's not always, in the fertile period, a woman has a high libido. It could be several days before or after menstruation, even when she's menstruating. It's just the agreement of you both to specify the time of lovemaking as an option: morning, afternoon, or evening.

Sexual intercourse carried out on the wishes of both will feel happier.

Living through the Sexual Revolution