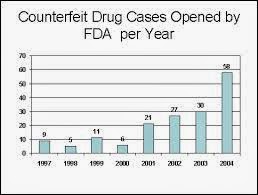 Counterfeit drugs are detrimental to many parties, not only consumers and the pharmaceutical industry of original drug makers but also the government. What else is if not over taxes.

Illegal goods don't pay taxes because their origins are unclear. The velocity of money in the business of counterfeit drugs account for tens of millions of dollars a year or take 10 percent of the total turnover of the trade.

However, consumers are still the most definite victims. They're out of money, but the results are meager, especially if the consumed counterfeit drugs are meant to fight disease classified as severe, such as antihypertensive. If they're continually taking the medication, another complication arises because the blood pressure doesn't go down.

Another example is patients who'll take surgery, but the anesthetic drug is counterfeit. The operation will be delayed because the medicine isn't working as it should.

The rise of counterfeit drugs is because the profits are so savory, and the law enforcement is still weak. The case could evaporate while the sentence is only a few months. It's never heard, medicine counterfeiters are sentenced to prison despite exposed to raids many times.

On the other hand, the demand for illegal drugs is also quite high because the price is skewed. The cheapness of counterfeit drugs is because of small capital, just for the packaging. The rest is consumer's suggestibility factor whether the drugs are efficacious or not.

Meanwhile, the original drug maker should spend capital to purchase raw materials, packaging, marketing costs, office expenses, and so forth.

Types of drugs often counterfeited are diverse from lower-priced generics widely circulated in the general public to the expensive drugs for severe illness or due to be imported, from allergy medications, painkillers, antirheumatics, to antihypertensives and anesthetic agents.

Faced with the invasion of fake drugs, as consumers, we must be alert and intelligent. Cheap price should be a sign to alert. Drug prices in the market are depending on who the maker is.

Currently, there're three types of official drugs on the market. The first is generic drugs which account for 10 to 20 percent of the total available market. The second is branded drugs with approximately 60 percent of market share. In these drugs, there has the same brand but is manufactured by different manufacturers so the price is also different. The last is patent drugs, the highest level.

The problem is, the authority which determines the patients taking what medication or type is the doctor. This is the role of the doctor to scrape fake drugs by aligning the prescription with the financial condition of the patient.

Distinguishing fake and genuine drugs isn't an easy task. In fact, doctors are difficult to distinguish. Of course, this happens on counterfeit drugs the packaging has been similar with the genuine. At certain medications, if consumers are sharp, it'll be looked which one is the fake and original.

Problems occur if consumers themselves don't know the original drug packaging shaped like what, or it's so good, so similar.

For trivial, buy medicines at a pharmacy, but this doesn't guarantee 100 percent of gaining genuine drugs because the sources can be from freelances or sellers not clear. Rules that pharmacies should buy drugs from authorized distributors are already there, but one or two pharmacies could be tempted by the price difference that allows to benefit the excess.

Society as the consumers must also be alert to start doing some things. In addition to buy medicines at a pharmacy or drug store reliable to the ware authenticity, people are also required to be critical of any medication they receive. For example, ask the expiration date.

Don't easily believe the drugs sold cheaply and be shy to ask the label. Even if you have to buy drugs at street stalls or kiosks, ask the manufacturer's original packaging if the drug you receive doesn't include a label.

Say No to Counterfeit Health Care Yes to the Alternative