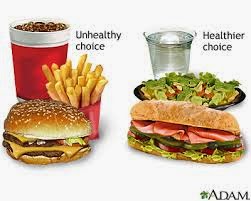 Actually, these foods aren't so bad. For example, an ice cream made from milk contains a lot of calcium; the meat in the burger contains vitamin B and protein; and pizza that uses peppers and onions in the mixture also has enough fibers, other than calcium from the cheese.

That we need to limit the consumption of junk food, it can't be disputed. However, when forced to eat it, accompany with fibrous foods. If you eat a burger, cover with fruit juice; While eating fried chicken, sip vegetable soup; and when spending a pan of pizza, don't forget the salad.

So, for fans of junk food, there's a road to be healthy, right?

How to Eat and Think Yourself Thinner

The Fine Art of Flirting

It Starts with Food