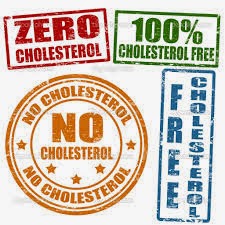 Later in the print or electronic media, we often read, hear, or watch advertising of food claimed by the manufacturer as healthy, for example, cooking oil x or peanut y doesn't contain cholesterol.

In fact, there are supermarkets that write prominently: rice z is no cholesterol. That's clear, people who don't want high blood cholesterol will buy these products without the worry with coronary heart disease or hypertension.

Is it true that the information conveys? Right! However, there's something missing when the advertising information is swallowed whole.

Why? To discuss it, let's get acquainted first with cholesterol.

Cholesterol is an invisible fat formed in limited quantities in the body or obtained from animal foods. Most of the fat in the body and food is in the form of triglycerides which can take the form of saturated and unsaturated fats.

Saturated fats are mainly found in animal foods, such as butter, fatty meats and milk, and organs, also of certain plant foods such as coconut milk and oil, and palm oil.

Unsaturated fats are found in plant foods, such as vegetable oil other than coconut and palm, avocado, and others.

Saturated fats and cholesterol are that can increase the risk of cardiovascular disease such as coronary heart or hypertension.

In our bodies, cholesterol is synthesized from acetyl coenzyme (acetyl-CoA). Acetyl-CoA is derived from the metabolism of nutrients of calorie sources. So, all nutrients of the energy sources can produce acetyl-CoA which enters into the cells for the raw material of energy for our bodies.

By itself, when the amount of acetyl-CoA in the body increases, it results in, among others, blood cholesterol. Here's, it's clear, why someone who daily consumes natural energy sources in large amount, the blood cholesterol can be elevated although they don't contain.

In the body, cholesterol is located on the outside of nerve cells. Its function is to help delivering the conduction and transmission of electric signals. Without cholesterol, nerve cells can't function properly so that the body's motor coordination is impaired. Cholesterol also plays a role in producing bile, steroid hormones, and vitamin D.

Therefore, each person needs to intake of cholesterol. However, it shouldn't be excessive. Safe intake for people with normal cholesterol is less than 300 mg per day. The thing to remember, though it doesn't contain cholesterol, calorie sources for the body will still produce cholesterol. Therefore, we need critical of messages in advertising of food products.