Not All Can Multitask 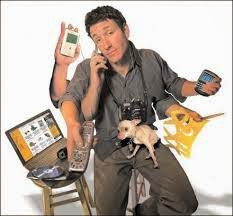 We'll be very happy and helped if having a tool that can multitask. However, what if the person who has to multitask? It turns out that not everyone can!

Multitasking at work can occur due to the desk job expansion. It was only working on the field A. For the expansion, it ends up doing A+ or even could be B. A relatively new field should be in our hands.

Multitasking is inevitable because of the higher demands and competition of work. However, not everyone can multitask. If enforced, their productivity and creativity could even slack. So, recognize each character while building the foundation of energy.

"Cognitive processes of each person are different. Each one has its own mindset. There are rigid and flexible." Said Ester Lianawati, a psychologist from the Faculty of Psychology, Krida Wacana University, Jakarta.

So, apart from fit or not, or good or not, the result in each person can't be equated.

Ester added, in the study of psychology, a perfectionist is usually rather difficult to multitask because his pattern of thought tends to be rigid. Instead, flexible person with more flexible mindset is typically more open. He doesn't experience a difficulty to multitask.

The issue isn't the mechanism in their brain capable or not of doing it. There is also a mechanism or boost in self forming a mindset that "wants" or "doesn't want" to multitask.

So, talking about multitasking, in Ester's eyes, the grouping is approximately:

2. People who can multitask with or without certain risks.

3. People who actually need to multitask to improve a performance.

"Don't be allergic first to multitasking because can be a mean of self-development." Said Ester.

Don't need to blaspheme people who can't multitask because not necessarily worse his quality work.

"In terms of quantity, it may be lost; but not necessarily in quality." Said Ester.

If including people who can only work on one job at a particular time, it'd be a headache if requested to multitask, especially when seeing the pile of works that never subsided. You were so often to ask an absence. If presented, you were unable to work optimally. So many works undone.

This condition, according to Jamil Azzaini, a master trainer and consultant in Kubik Training & Consultancy, is referred as a state of "transmitting power losing".

The transmitting power, according to the author of Menyemai Impian Meraih Sukses Mulia dan Tuhan, Inilah Proposal Hidupku, is a metaphysical energy that emanates outward when our physical energy is in shape.

Even if the job was well resolved, you ran out of time and energy to nurture your men, accommodate their suggestions and vents. Not to mention at home, office affairs have sucked your emittance. So, you got tired in front of the children and wife. You could have a shot career but household cluttered.

In the example above, added Jamil, the people's mind quality is clearly affected. The brain used skipping is unable to run the main task, namely to think. In the long run, the employment error will increase and no job is complete.

If left unchecked, health can be impacted. Jamil cited the result of an international survey of 1,300 managers. It was one third of them suffered from stress due to information overload.

"Wrong place" when multitasking can also be a source of tension in the workplace. One day, when attending a meeting at the request of a friend, it turned out you were actually busy to reply an SMS or email from some colleagues for a different business. Your friend crazily felt ignored and couldn't accept the reason that the SMS or email was more important than the meeting he held. Disorderliness happened.

However, does multitasking always make the chills? Apparently, it doesn't. There are really people "able" to do it well. Some even need to multitask because always wanted to divide the concentration on some areas of the work at once." Said Ester Lianawati.

So, recognize whether including people less able to do some works at the same time or not, or just the person who takes some multitasking to improve yourself.

Just you yourself can answer.

The Other Side of Chaos

The Art of Concentration