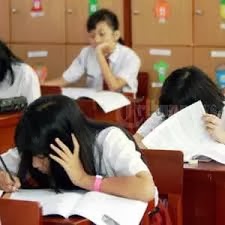 Exercising discipline in children isn't easy. Just to wake up in the morning, make the bed, then shower, feed, and be ready to go to school, sometimes, I must grumble to remind them what to do.

And that routine is every day, as well as after school should put shoes in the shoe rack, or bag where it should be, or other things.

Educating children to be able to discipline becomes our mutual benefit. However, in children, the responsibility still needs to invest and train.

Even delinquency and deviant behavior committed by child are basically a learning tool. With the ability to analyze the situation, through mischief, he experimented to where the behavior line is okay.

Because delinquency is usually predictable, it can be prepared a kind of "disciplinary law". But before that, four factors must be considered.

4. The capacity of parents in dealing with stress as this will affect the ability to communicate with children.

2. Determine the limit when the rules are violated. This limit must be explained concretely, especially for children under five.

3. Warning. Don't give threats that can't be fulfilled. Warning is sufficiently given once to be consistent. Immediately, take action when the child is stubborn.

4. Act accurately in accordance with the previous agreements.

5. Control your response intonation. Tone and volume of voice, speech speed, body language, and face expressions can also be used as a medium to communicate. Basically, the kids are always looking for attention and warmth, and don't like the cold and boring. So, the cold expression can be used to show our response without giving attention as they'd hoped.

7. Correct the error. After the sentence passed, the problem cleared; either with apologizing or doing the thing he wasn't willing to do.

Discipline can't be separated from reward and punishment. Form of reward may be the attention of the parents because for the child, that's always coveted. Positive impetus in reward was truly effective if the given reward succesfully motivated child to change his behavior.

Thus, the reward success isn't determined by dollars or quantity of goods but on changes in children's behavior. Therefore, the choice of the form of the reward is very crucial.

The following is recipes to give positive encouragement.

1. Choose lures that keep the taste of children, not you.

2. After giving feedback, show that, to you, this issue isn't important. He who needs it.

3. Gift is equivalent to a given task.

4. The level of difficulty of the task is in accordance with the child's ability.

5. Gifts at the beginning of this exercise program are important to motivate the child.

6. Make him fight. If one level of achievement had been reached, pair a higher target.

7. If he succeeded on some level, give "bonuses" which could be administered by a variety of variations.

8. Both you and the child must play fair and consistent according to the agreement.

Discipline Without Shouting or Spanking