Be Wise with Antibiotics 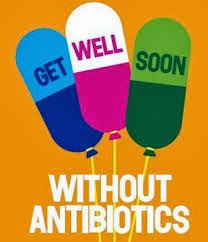 With the discovery of penicillin by A. Fleming, humans thought bacterial infection had been controlled. Unfortunately, hopes are to stay hopeful because germs turn cleverly into "a stealth" resistant to antibiotics.

This moved the World Health Organization with the Center for Disease Control and Prevention in the United States on June 12, 2000 to make a press release entitled Drug Resistance Threatens Progress in the Field of Medicine.

There expressed, "The world faces a dangerous situation because drugs that previously effective had been diminishing its effectiveness. We face the risk of essential drug loss and the opportunity to control infectious diseases due to increasingly resistant bacteria."

Almost all types of infections, nowadays, are partly resistant to antibiotics. Unfortunately, the percentage continues to increase, for example, in tuberculosis, pneumonia, malaria, and AIDS. Approximately, 30% of patients given some lamivudine for hepatitis B, for a new first year, have shown a resistance.

The causes of resistance are different in each country. In developing countries, resistance can arise because people can't afford to buy enough medication to complete a course of treatment. Tuberculosis, for example, should be treated for at least 6 consecutive months. The bacteria die only partially. Meanwhile, the surviving even becomes resistant and grows rapidly.

In addition, excessive use of antibiotics where used inappropriately for the proper indication, whether for humans, livestock, or agricultural purposes, can also cause a germ resistance. In Indonesia, the wrong use of antibiotics for the flu and other viral diseases has made the germs become resistant.

Whatever the cause of the resistance, increased frequency of larger and larger interstate journey causes the resistant germs, as transmitted by humans, able to move easily anyway.

The use of antiseptics in various products is exacerbating the resistance problem. It's irrational to kill germs on the skin with an antiseptic as not pathogenic. After a few minutes, germs will come back. It's because germs are everywhere.

Actually, cleaning the skin is enough with soap and water. Anyway, antiseptic will stimulate germs to become resistant such as mosquitoes sprayed with insecticide every day.

According to forecasts, more than 50% of antibiotics has misused. In Indonesia, one of the two recipes contains antibiotics. However, in addition to lead a resistance and decreased immunity, buying antibiotics themselves actually increases a cost for vain placebo.

Contrary to what many people already believed, antibiotics don't accelerate healing a flu or declining a fever. "Red" throat or the fever isn't a reason to immediately be granted antibiotics. On the other hand, antibiotics cause many side effects such as nausea, diarrhea, even sometimes fever, and various other complications. Children who frequently eat antibiotics will also lose their immunity. So, they'll be sick more often.

Therefore, some of the following suggestions seem to deserve an attention:

1. Don't push doctors to prescribe antibiotics if not necessary.

2. More than 90% of cases of fever and sore throat that occur for 1-4 days aren't a bacterial infection but the virus that doesn't work with antibiotics.

3. Flu still at the beginning level should be treated with common cold medication.

4. Antibiotics aren't a free drug. So, it requires a doctor's prescription.

5. Antibiotics are of many kinds. When choosing your own, it'll most likely be less suitable.

How to Survive in a World without Antibiotics

How I Got Rid of H. Pylori