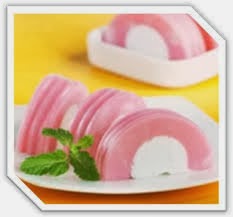 * Pour 1 cup of granulated sugar and 1 tbsp. of water to the nonstick pan wide enough. Put on low heat until the sugar melts. Don't stir too often. Once melted, insert the water. Sugar would freeze. Cook until sugar is liquid again.
* Add the remaining sugar. Cook again till the sugar melts.
* Melt the gelatin with a little sugar water. Mix with the remaining sugar water and bring to a boil while stirring constantly.
* After the gelatin dissolves, insert the milk and salt. Stir until boiling.
* Soak gelatin mold. Arrange ⅓ kopyor coconut meat at the bottom. Sprinkle with a few tablespoons of liquid gelatin and leave until almost frozen. Flush with spoon about 1 cup of gelatin in order for the gelatin that has been binding kopyor doesn't melt back and make kopyor float. Let the gelatin until half frozen.
* Repeat until kopyor and gelatin are depleted or mold is full.
* Let cool then store in the refrigerator.

* Blend all ingredients except rum essence. Stir constantly over low heat until boiling. After cold, give rum essence.