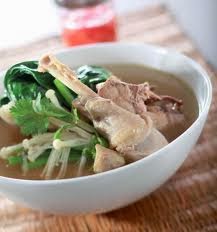 * Brush the chicken with oyster sauce, fish sauce, sesame oil, and grated ginger. Let stand for 15 minutes until the flavors are to infuse.
* Place the chicken in the heat-resistant dish.
* Boil in the heat boiler until cooked.
* Lift the chicken. Set aside the broth.
* Saute garlic until fragrant.
* Pour the chicken broth into garlic.
* Enter also horenzo/pocai and fungi. Cook over medium heat until boiling.
* Enter cilantro, horenzo leaves, and enoki mushrooms. Add salt and pepper. Bring to a boil.
* Serve immediately.