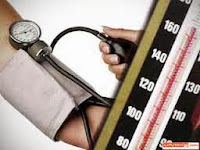 In our bodies, like public transport, blood is to and fro through the vascular tissue. Blood transports nutrients and oxygen to be delivered to all parts of the body. The engine driving the blood to flow continuously is the heart.

The person is said to suffer from high blood pressure if their blood pressure was 140/90 mmHg or higher measured on both arms three times within a period of several weeks. One in three people with darting disease does not show signs or symptoms whatsoever. Unfortunately, if this hypertension is not controlled, it can damage the heart and blood vessels that leads to emergence of several other conditions such as stroke, heart attack, kidney failure or disorders of the eyes.

There are two types of hypertension. The first is primary or essential hypertension not known the cause yet. It is estimated that the causes of this type of hypertension, among others, are changes in the heart and blood vessels, smoking, age, family history, overweight, an inactive lifestyle, stress, alcohol or salt in food. All had been referred to the risk factors of primary hypertension.

The second is secondary hypertension caused by other ill effects such as chronic kidney disease, hormonal disorders or use of certain medications such as birth control pills.

Blood pressure is usually not the same throughout the day. Within 24 hours, the pressure in the arteries undergoes natural fluctuations. The highest pressure usually occurs in the morning after waking up and at the time of the activity. Then, it will be stable throughout the day and down at night. The lowest point is in the early morning when we fell asleep.

Blood pressure also changes when we change body position, for example, in sitting or sleeping.