In Your Eyes, I See the Disease 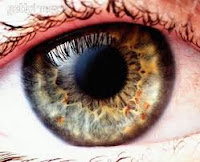 Eyes are the windows to the heart as well as the senses to enjoy the beauty of the world. However, for Dr. Asdi Yudiono, all uses are still lacking. For him, the eyes can be used to support the profession as a doctor, i.e. to "predict" a variety of diseases that potentially attack the body. How to shape a "prediction"?

Seeing how Dr. Asdi Yudiono works, you probably would expect the young doctor was an ophthalmologist. You see, he has more to examine his patients' diseases through the sense of sight.

However, I swear to God Dr. Asdi is not an eye doctor. He is a general practitioner. The difference with the another general practitioner is a good mastery of the iridology. Thanks to science which he studied for years, he can detect early variety of the disease that will befall a patient simply through the iris picture.

Even so, according to him, actually iridology was not been discussed in medical science. It is just one form of alternative preventive medicine, or prevention which uses pattern, color, and physical state of the iris of the eye to provide information about various diseases that may be present within the iris owners.

From the observation, it is expected the disease to be resisted since still a "symptom", so does not bother the patient at a later date, or reaches severe stage. One more information to remember, the science of "fortune-telling" through the medium of the iris is separated from medical science of the eyes. Therefore, do not call anyway Dr. Asdi as an eye doctor.

By the way, how the hell to characterize a healthy person's iris? If people is in good health, both his eyes are fresh-meat red and clean, no spot whatsoever, he explained.

Although having the idea of all kinds of his patients' disease causing, Asdi does not think to deal with all diseases. If it was not his field, he does not direct. He recommended to visit the experts, for example, to an obstetrician if the problem was a matter of womb and reproduction, explained the father of four sons. Dr. Asdi also encouraged patients to keep doing medical examination to current standards, such as CT scans, ultrasound, X-ray, clinical laboratory tests, ECG, and so on.

The examinations are important to monitor organ abnormalities more specifically to particular organs which are experiencing problems. Iridology can not be specific and detailed to check of certain organs. Arguably, this is what distinguishes the action of Dr. Asdi's fortune telling with forecasters à la crystal ball because he remains grounded in the basics of medical science.

Iridology was first developed scientifically by Dr. Ignaz von Peczely, a doctor from Hungary. By accident, Peczely found this science from his pet bird which suffered a broken leg. He saw at the bottom of the iris of the bird, there was a beam of black lines. That bird was hospitalized by him and eventually recovered. When cured, the black spots on the bird's eye turned disappearing.

In the 1950s, iridology was growing in America, Europe, and China. The progress was more rapidly after Bernard Jensen made a chart of iridology still in use today.

Bernard Jensen, who pioneered iridology in the United States, presents a basic introduction to this science which analyzes the delicate structures of the iris to reveal and locate inflammation in the body.

Readers are given an explanation of how the chart works, including detailed illustrations of iris topography showing individual system charts, and over two dozen color photographs of irises diagnosing stages of different ailments.

This book supports Jensen's belief that iridology is an important element in the total, holistic health care program.