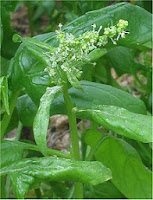 Spinach (spinacia oleracea), often served at the dinner table, is in the family of amaranthaceae. In addition to green leafy spinach, there are also red. Spinach has a myriad of nutrients.

Besides it contains fibers, spinach is also rich in beta-carotene. One cup of spinach that has been picked meets the 70% requirement of beta-carotene per day. Beta-carotene makes spinach as a good antioxidant. Spinach also contains folic acid, iron and zinc.

Spinach, containing choline and inositol, is able to prevent coronary heart. The two compounds work together to prevent the accumulation of plaque. Fiber content helps regulate the metabolism of carbohydrates. So that, after meals, it does not necessarily raise blood sugar levels.

Iron content in spinach is undoubtedly. Experts even believe, that the iron content is two times more than other vegetables. It is suitable to be consumed by people with anemia due to iron deficiency.

Spinach has a low calorie content and also fiber which can inhibit the absorption of carbohydrates and fats as well as giving a sense of fullness in the stomach.

Spinach is rich in folic acid needed by pregnant women to prevent defects fetal growth. The contents of calcium and magnesium are efficacious to strengthen bones and teeth.

Do not cut spinach too small and be cooked up, because it would eliminate most vitamin content. Those who suffer from high uric acid levels, arthritis and inflammation in the gastrointestinal tract should consume spinach in moderation only.